Coronavirus in India: Is public negligence causing surge in cases? | Asia | An in-depth look at news from across the continent | DW | 31.07.2020 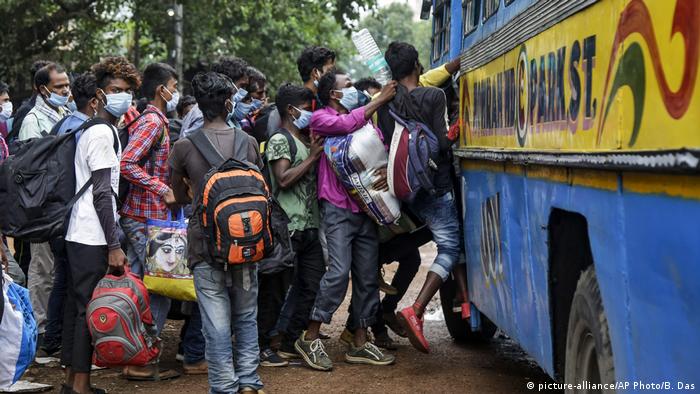 When India began a nationwide lockdown in March, the reality of coronavirus had just begun to sink in. As the lockdown continued people across India looked into a void of uncertainty.

In the two months that followed, New Delhi's once bustling streets were deserted, businesses closed their doors, and a general atmosphere of fear took hold of the nation as everyday life was changed.

Before the lockdown, 28-year-old Arif [name changed] and his friends would play soccer every week.  For Arif, a former state-level footballer, the beautiful game was his life, and the lockdown kept him away from the pitch.

So, in mid-June, only days after restrictions were eased, Arif and his friends returned to their weekly games, even as the capital became one of the worst affected cities in India.

Arif and his team of 13 players now convene every weekend, just like they used to before the pandemic.

"Everyone comes to the field wearing face masks, but they take it off before the match," Aarif said. "Of course, social distancing isn't possible at all times and people do come into close contact during the game," he added.

"There is a level of trust among the people coming to play. We trust people to not come if they are feeling unwell or showing symptoms of COVID-19," he said.

India's official number of COVID-19 cases went from 691 at the start of lockdown to more than 1.5 million in four months as more people dropped their guard. Recently, the country has seen record single-day spikes week after week.

Aarif's group isn't the only one flouting social distancing rules. Since the lockdown was lifted on June 8, Delhi Police have fined 66,181 people for not wearing masks and another 10,316 for not distancing.

Law enforcement officials in the southern Indian city of Bengaluru have reported similar figures. Nearly 47,000 people were fined more than €100,000 in the first 30 days of India's so-called unlock phase.

During his address in June, Indian Prime Minister Narendra Modi has cautioned citizens against "carelessness" since the easing of restrictions.

"We have been careless. We were maintaining social distance, and wearing masks when the lockdown was in place," Modi said. "But today, when we need these things more than anything, we have not been following these protocols."

Religion and spirituality are an important part of life for many Indians. Some people hope that trust in god and religion will safeguard them from the coronavirus, and deem measures including facemasks unnecessary. Others continue to visit religious sites for worship and socializing, prompting concerns from health authorities about potential new hotspots.

Read more: Coronavirus: 57% of people in Mumbai slums had virus

The Tirumala Tirupati temple in the state of Andhra Pradesh — touted to be among the world's richest and most visited religious centers — has faced increasing pressure to restrict the entry of pilgrims or shut down completely after a recent spike in coronavirus cases.

"About 9,000-10,000 pilgrims have been coming to the temple every day since its reopening," Bhanu Prakash Reddy, a BJP member and former participant of the trust that manages the temple, told DW.

Since the temple reopened its doors to pilgrims in June, 167 temple staff members and 17 priests have tested positive for COVID-19. In July, a former head priest of the temple died due to coronavirus-related complications.

"The temple officials are taking every precaution to safeguard the employees and devotees," said Reddy. "We have given PPE kits to the staff, and all pilgrims are required to wear masks before entering the temple."

Reddy said that while he is in favor of closing the temple to pilgrims, he wants the daily rituals to continue.

"For the Lord, we must perform the rituals. It's been going on for thousands of years. Rituals are mandatory," he said, adding that all the priests who tested positive are recovering.

Reddy has written to the state government, demanding a temporary restriction on the entry of pilgrims. But temple managers have refused to close, sparking outrage over health risks.

Since the easing of restrictions, wedding ceremonies with up to 50 guests have also been authorized, albeit with social distancing measures. According to local media reports, however, coronavirus rules have been repeatedly violated.

After a video of a large wedding procession in the state of Odisha went viral on social media in June, authorities arrested the groom and his father and fined other family members.

For Aparna, a Mumbai resident, such violations stem from ignorance surrounding the virus and how it spreads.

She recently confronted a friend on social media after she attended a wedding in Rajasthan with around 150-200 guests.

When she asked him why no one at the wedding was wearing masks or following social distancing rules, his response shocked her, as it goes against scientific consensus and advice from public health officials.

"Masks are quite useless. The virus only spreads via touch. If you wear gloves and wash your hands at regular intervals, you'll be fine," he said, adding: "Wearing masks is just optional."