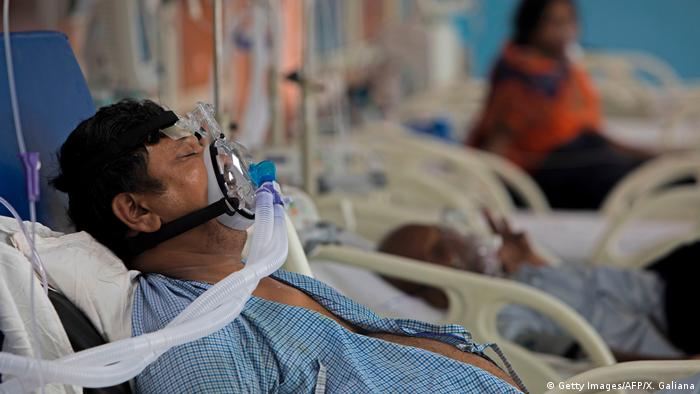 For weeks now, India has reported the fastest growth in COVID-19 infections in the world. Health authorities have registered nearly 1.49 million confirmed cases, including over 33,400 deaths. Last week, 100,000 people contracted the disease in just three days.

Scientists warn that India, the third worst-hit country in the global coronavirus tally after the US and Brazil, is close to reaching 50,000 infections a day, which would see it overtake Brazil in the number of daily cases.

In a bid to ramp-up testing capacity, Prime Minister Narender Modi on Monday announced that his government is launching more testing facilities so that all state governments can keep up the "test, track and treat" strategy. According to Modi, there are currently 1,300 testing labs in India and more than 500,000 tests are being conducted daily.

"The admission of community transmission makes policy makers uncomfortable. That should not be the case when we have more and more people testing positive," Anant Bhan, a Pune-based doctor and researcher in global health, told DW.

According to Jayaprakash Muliyil, an epidemiologist at the Christian Medical College in Vellore, some leaders worry that an admission of community infection could be interpreted by the public as the government's inability to curb infections, and that measures to contain the virus including lockdown were unsuccessful.

"Does the government believe it would be taken as some sort of failure on its part to effectively identify and isolate all the primary and secondary contacts? The disease has got a foothold," said Muliyil.

Is India in denial?

According to World Health Organization (WHO) guidelines, community transmission is the inability to trace and identify the clear source of origin of the infection in a new community.

So far, only the governments of Kerala, West Bengal and Assam have admitted that there is community transmission in areas of their respective states.

The latest health ministry data found that 86% of COVID-19 infections come from just 10 of the country's 29 states, with southern India containing most of the major hotspots.

Last week, the Indian Medical Association (IMA) distanced itself from the Hospital Board of India after its chairman V K Monga announced a case of COVID-19 community transmission.

"Does it make a difference what you call it? We just have to keep improving our strategy and we don't have to call it by a particular name," a senior virologist from the IMA told DW.

"India is not in community transmission. That's only a term which is used. We have to continue with the strategy of testing, tracing, tracking, and quarantine and continue with the containment measures which have been successful until now," said Bhargava.

'No doubt' of community transmission

The Indian Institute of Science predicted that India may have as many as 3.5 million COVID-19 cases by September 1.

Bhramar Mukherjee, a well-known epidemiologist from the US who has been working on mathematical models of the trajectory of COVID-19, told local news site The Wire that it is probable India already has up to 30 million positive cases and that in the next six weeks the total is likely to jump to 100 million.