How coronavirus is affecting underprivileged children in India | Asia | An in-depth look at news from across the continent | DW | 10.07.2020

How coronavirus is affecting underprivileged children in India

The immense health and socioeconomic crises brought about by the COVID-19 pandemic have disproportionately hit underprivileged children in India. They could lead to a spike in poverty, child labor and child marriages. 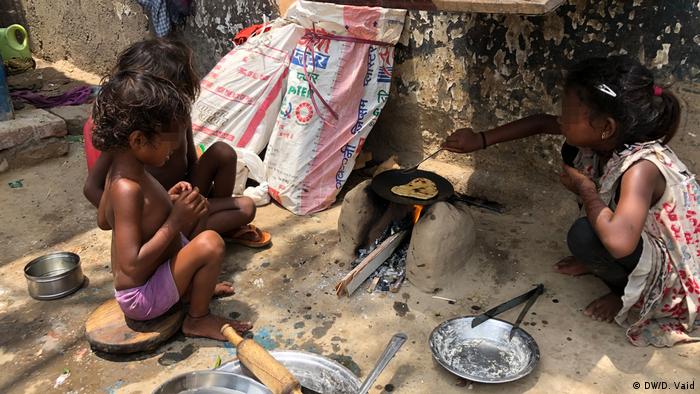 It's a hot afternoon and 17-year-old Nankesh is busy rummaging for scraps in the once bustling bylanes of South Delhi's Nizamuddin area. Before the coronavirus pandemic, this part of the Indian capital saw scores of people commuting daily from the railway station nearby. They got with them plastic bottles and food wrappers, Nankesh's source of livelihood.

"Ragpicking here was never difficult. I had no money during the lockdown. Survival has never been this tough," he says.

Orphaned at a young age and living on the streets since then, Nankesh knows what survival means. "Coronavirus is for the rich, not for us. The poor have to work. I have no family, so I have nothing to worry about. I just want to earn my daily wage," he says, as he continues work without a face mask.

Nankesh is one of the millions of children who live on the streets in India. They are among the most unprotected in the country as they don't make it to national statistics. Many don't have a legal existence or the documentation that entitles them to access basic services.

They are often deemed as "invisible" children, despite many of them being present at traffic signals, places of worship and under flyovers.

"Street children were the most vulnerable during the lockdown. If you see the nature of their livelihood, they are dependent on begging, vending or helping their families with work. Everything has been affected by the COVID situation," Sanjay Gupta, director of Childhood Enhancement through Training and Action (CHETNA), an NGO that works with street children in Delhi and neighboring states, told DW.

Gupta says it was a challenge to connect with the children as movement was restricted even for the NGOs. The whereabouts of many of these children could not be determined because of a lack of communication. "It wasn't all well. They had developed several health problems. Many were found in unhygienic conditions with discharge in their eyes and wax in their ears. They had eaten half of their usual daily diet," Gupta said.

Some children claimed that they were discriminated against during food distribution drives because of their appearance.

"The government was quick in releasing relief mechanisms but the issues of caste and class in India, which are also prevalent on the streets and in slums, cannot be wiped out overnight," Gupta said. "In several cases, if there was a queue for food distribution, these children were asked to stand at the end. Because of their attire, the matted hair and smell, people were afraid that they would contract the virus from the children."

Spreading awareness about the virus and ensuring physical distancing was another challenge.

"A minimum of 60 people live in this room. While the world was talking about social distancing, we had no choice. We slept close to each other," 16-year-old Sangeeta who lives in a night shelter in Delhi said.

According to a UNICEF report, COVID-19 poses a threat to the futures of 600 million children in South Asia. While 240 million children already live in "multidimensional" poverty, the crisis will push an additional 120 million children from the region into poverty. The report also said that India will account for a bulk of the deaths of children aged five and under.

"Before the crisis, it was estimated that around 155 million children in India were under the multidimensional poverty line which is roughly equivalent to the entire population of Russia," Soledad Herrero, chief of child protection at UNICEF India, told DW. "What started as a public health emergency has turned into a multidimensional crisis that has led to a pandemic of malnutrition, of poverty, of violence and also mental health issues."

Child Rights and You (CRY), an NGO, highlights that between 2005-06 and 2017-18, India's Multidimensional Poverty Index improved from 0.283 to 0.123 but the pandemic now threatens to undo most of this progress because there has been a negative impact on nearly all socioeconomic indicators.

"With the lockdown, several basic services for children such as growth monitoring, supplementary nutrition, immunization, sexual and reproductive health services, education and child protection systems were disrupted," said Puja Marwaha, head of CRY. "This has affected children living in multidimensional poverty disproportionately since they are largely dependent on these services to fulfill their rights and entitlements."

After the pandemic hit, India also saw its worst migration crisis since independence. As migrant laborers returned to their home states and villages on foot, the country witnessed unparalleled scenes of children of migrant laborers bearing the brunt of it. Many child deaths were reported across the country as a result of long and unsafe journeys.

"It is important to recognize that children comprise a high share of the migrants in India. If you look at the census information, even though outdated, you will see that 1 out of 5 migrants are actually children," Herrero said.

The children, who were already in a precarious situation, have undergone high levels of trauma and stress because of being uprooted overnight.

"In these migration journeys, many children were unaccompanied or separated. We had anecdotal evidence that when Bihar started to register some of the migration numbers, they identified in the beginning that 5% of those migrants could be children moving alone," Herrero said.

This stress on children during their formative years can impact their self-esteem and decision-making abilities lifelong, said Marwaha.

Threat of child labor and marriage

There are fears that COVID-19 will impact India's long battle against child labor and child marriage.

Since the lockdown began, Childline India, a helpline for distressed children, has received over 5,500 calls related to child marriage. The number accounted for nearly 35% of the total interventions by Childline during the period.

Experts believe that many sectors will now be desperate for labor and a reduction of costs. The conditions will be conducive for a spike in child labor. The loss of income for adults and death of caregivers will also force more children to take up work.

"Increase in household-level poverty, coupled with the closure of schools, may also lead to an increase in child marriages of girls as they are mostly perceived as liabilities," Marwaha said.

As Indians board domestic flights, protocols are being put in place to protect passengers from COVID-19. However, some travelers say they feel unsafe as rules are ignored and airlines play down health risks. (09.07.2020)