As Indians board domestic flights, protocols are being put in place to protect passengers from COVID-19. However, some travelers say they feel unsafe as rules are ignored and airlines play down health risks. 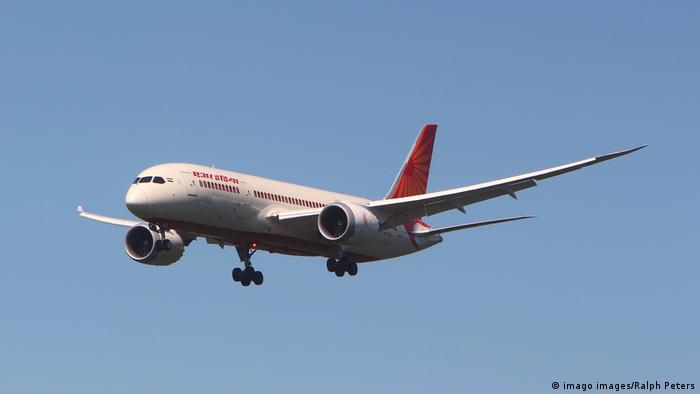 After India resumed domestic flights on May 25, aviation authorities assured the public that measures were put in place to prevent the spread of COVID-19.

However, as the virus has been spreading rapidly across India in recent weeks, there is growing concern that lax enforcement of safety measures will contribute to the spread of COVID-19 via the country's air routes.

On July 6, Kolkata airport barred flights arriving from six Indian cities, including Delhi and Mumbai, until at least July 19. Authorities in the state of West Bengal, where Kolkata is located, have blamed a spike in COVID-19 cases on travelers arriving from elsewhere in India.

One air traveler, who flew from Delhi to Kolkata in June, told DW she became very anxious after boarding a flight with many coughing passengers on board. After the flight landed, she was allowed to leave Kolkata Airport without receiving a stamp that is required to keep track of quarantined arrivals.

"I literally walked out with no checks. I was given a form on the plane, on which I had to specify passenger details. But no one collected that form at Kolkata Airport," she told DW.

On a flight from Delhi to Mumbai on June 22, a DW reporter noticed several violations of COVID-19 containment measures at both airports.

At Delhi airport, passengers waiting for flights were not adhering to the physical distancing measures demarcated on the floor with colored tape. No airport officials were there to enforce the rules.

At the baggage screening people huddled close together, as officials rushed to screen bags. The security checkpoint was also understaffed with two to three personnel at each, insufficient for the large crowd, with people standing close together rushing to get through.

"As clearance takes longer during the pandemic, it increases the queue, leading to a rush at the security gate," an airport official said.

At the boarding gate, people rushed to board the flight, ignoring pleas from airline personnel to maintain social distancing.

"We are finding it difficult to manage the anxiety of the travelers. It's hard to tell them to maintain social distancing while protecting yourself at the same time. We try our best, but if the people don't listen, what can we do?" another airport employee told DW. 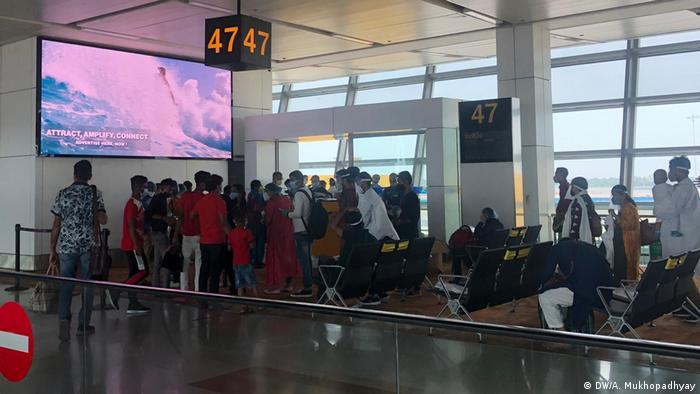 At the boarding gate, people rushed to board the flight, ignoring pleas from airline personnel to maintain social distancing.

After arriving at Mumbai airport, essential workers such as doctors and government officers were asked to wait in a separate line, and were allowed to leave the airport without getting a stamp certifying a 14-day quarantine.

"If you have to go in the field to work, you don't need a stamp," said an official.

However, when asked by DW, an airport official disagreed that government officials or essential workers were being allowed to walk out without a stamp. "We make exceptions for no one," he said.

A spokesperson for Mumbai airport said that all domestic passengers were being screened and provided a hand stamp for observing mandatory quarantine by officials of the Brihanmumbai Municipal Corporation (BMC), the governing civic body of Mumbai.

Since flights restarted in India, airlines have come under scrutiny for failing to enforce safety measures. Photos of packed planes have circulated on social media, and reports of travelers testing positive for COVID-19 have made people nervous. 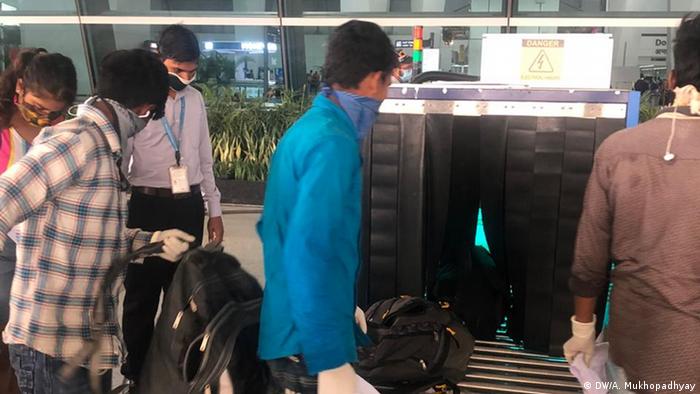 At the baggage screening people huddled close together, as officials rushed to screen bags

One low-cost airline provides passengers sitting in middle seats with "wrap-around gowns" and all passengers with face shields. A passenger told DW that flight attendants were limiting their movement on flights, and even discouraged people from using the toilets.

Read more: Coronavirus in India: A migrant woman's story of survival and aspiration

Sahil Singh, a doctor at V-Medica, a clinic in Gurugram, said that passengers are more likely to get infected aboard planes than at airports.

"According to some recent studies, the virus can be airborne because of droplets in a closed space," said Singh. "The airport is a huge space, so you can easily move away from someone if they are close to you. In a small area like a plane, the air suspension of the virus is increased."

A Mumbai airport official told DW that authorities have taken precautions to prevent the coronavirus from spreading in the air.

"The authorities have chosen to have bare minimum air conditioning at the airport, and little to no AC means that the virus won't circulate in the air. This is causing problems for passengers as they get hot, but it is for their safety."

Disposal of waste like used masks and protective coverings is another issue. One passenger told DW the receptacle for biohazard waste was overflowing after she arrived at Kolkata airport.

"Anyone coming in contact with an overflowing biohazard waste bin can get infected by not just the coronavirus, but other respiratory infections such as influenza. Sanitation workers can even get hepatitis B from the waste," said Singh.

Lockdown restrictions in places like India, Pakistan and Nepal have forced many to turn to poaching of wild animals and illegal animal trade for sustenance and as a source of income. Tanika Godbole reports. (08.07.2020)

India has overtaken Russia in overall coronavirus infections, pulling into third place globally behind the US and Brazil. Authorities have reversed a decision to reopen the Taj Mahal as case numbers continue to spike. (06.07.2020)