Child laborers caught between coronavirus and economic hardship | Asia | An in-depth look at news from across the continent | DW | 12.06.2020

In South Asian nations like Pakistan, where child labor is rampant, COVID-19 has brought more hardship to underage workers. Meanwhile, the resulting economic crisis is pushing even more children into child labor. 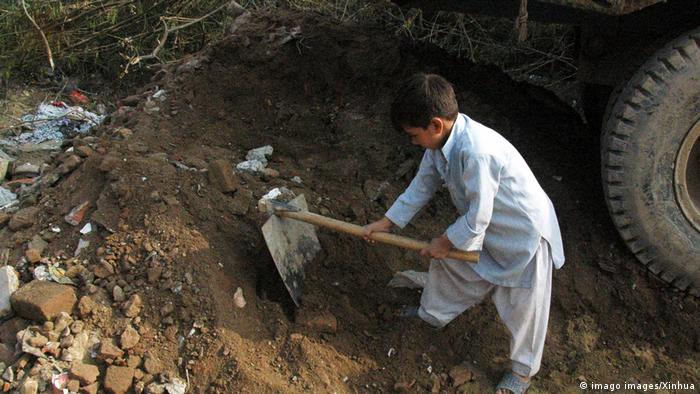 Thirteen-year-old Abdur Rasheed is an informal worker in Islamabad. His source of income is washing windscreens of cars that stop at traffic signal. On a good day, Rasheed earned 500 rupees (€2.67, $3) by doing this hazardous job. But the outbreak of coronavirus in the country has led to his already meagre income falling to almost nothing.

"As soon as I rush to a car, the driver yells at me: 'You would infect us with coronavirus,' they shout," Rasheed told DW.

"People do not want their cars to be washed as frequently as they did before the coronavirus outbreak. I can hardly earn 200 rupees now," he added.

Muhammad Nabeel is facing a similar situation. The 14-year-old boy works at a hardware shop in the country's southern Karachi city. His father works in a garment factory. "I had a terrible Eid. I could not earn anything because of the lockdown. My father also had no work. He has earned only 4,000 rupees (€21, $24) in the last three months," he said.

"Now the shop is open and I am hoping that things will get better for us," he added.

Pakistan has so far recorded over 125,000 COVID-19 cases with almost 2,500 related deaths. Experts say the number could be much higher as the rate of coronavirus tests is quite low in the South Asian country.

The government imposed a partial lockdown in March to contain the coronavirus spread, but since mid-May the restrictions have been eased. Prime Minister Imran Khan says he lifted the lockdown to help the poor people.

Many people in Pakistan thus face a dilemma: a COVID-19 lockdown would paralyze economic activities and make them jobless, while  no lockdown would result in a spike in coronavirus cases and more deaths in the country.

Child labor is also a complex phenomenon. While it is a violation of basic human rights, in countries like Bangladesh, India and Pakistan, unemployment for the poor children could be devastating.

Extreme poverty in South Asia forces children to take up menial jobs at a very early age. This denies them the right to happiness, education and equal opportunities in life. The governments in the region haven't done much to stop child labor, which means they also haven't taken measures to alleviate poverty and control population growth. In the absence of state support, poor households rely on the incomes of all family members, including children.

According to the International Labor Organization (ILO), poverty is the greatest single cause behind child labor in Pakistan.

The coronavirus crisis has wreaked havoc on Pakistan's economy. When Khan took power in 2018, Pakistan's annual GDP growth was around 5.8%; now it is expected to be around 1.9% and is likely to decline further. The country's fiscal deficit is almost 10% and revenues have plummeted in the past two years. Planning and Development Minister Asad Umar said last month that around 18 million people in Pakistan could lose their jobs because of the COVID-19 pandemic, whereas between 20 and 70 million people might fall below the poverty line this year.

Child laborers are most vulnerable to this crisis. Their incomes are likely to shrink further, with also a possibility of their losing jobs and increased exploitation at the hands of their employers. Also, a rise in poverty would force even more children to drop out of schools and start working.

The United Nations acknowledged this dilemma in its June 12 World Day Against Child Labor message. "The COVID-19 health pandemic and the resulting economic and labor market shock are having a huge impact on people's lives and livelihoods. Unfortunately, children are often the first to suffer," the UN said, adding that "the crisis can push millions of vulnerable children into child labor."

"Already, there are an estimated 152 million children in child labor, 72 million of which are in hazardous work. These children are now at even greater risk of facing circumstances that are even more difficult and working longer hours."

How can authorities tackle the health crisis and ensure economic welfare at the same time?

Experts say that addressing the child labor issue is the least of the government's concerns. The economic revival is mostly aimed at providing relief to big industrialists and businessmen, they say.

"In cities, most child laborers work in small shops, hotels and people's houses. Many of them have lost their jobs due to the health crisis. Welfare organizations are trying to help them but they cannot do what the state can," Asad Butt of the Human Rights Commission of Pakistan told DW.

Butt urges PM Khan to include the welfare of children in his economic revival plan.

"But I am not very optimistic about it. This government's economic plans are only to protect the elite," the activist said.

"I am afraid the government's policies are pushing more children into poverty," he added.