Can coronavirus pandemic bring a cycling revolution to India? | Asia | An in-depth look at news from across the continent | DW | 15.07.2020

Can coronavirus pandemic bring a cycling revolution to India?

The COVID-19 pandemic has resulted in unprecedented bicycle sales in India, as more and more people try to avoid public transportation for fear of contracting the virus. But the boom could be short-lived. 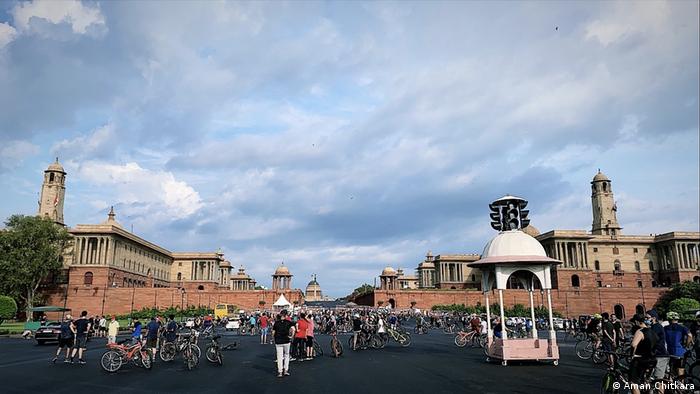 The telephone in Tarun Gupta's bicycle shop has been ringing non-stop all day. As he deals with customers, a line forms outside. "Business is booming, but the rush has become mentally exhausting," he said. Like other parts of the world, India has experienced a boom in bicycle sales during the coronavirus pandemic.

Although most Indian cities are not bicycle-friendly, there has been a sharp increase in recreational cycling during the pandemic as people try to beat cabin fever during lockdowns, get exercise, or avoid commutes on stuffed public transport.

Gupta and his partner have been running a shop selling high-end bicycles and accessories in a posh South Delhi neighborhood for four years.

Business suffered during India's nationwide lockdown announced in March, but he has more than made up for it since the easing of restrictions.

"Every year, March to June is when we see our sales peak. But in the last two months, sales have increased up to five-fold," he told DW. "We've already done enough business for the whole year."

Gupta still opens his store at 11 in the morning, but he is often forced to close late as customers keep coming in. He said the shop sees about 50-60 customers a day, some of whom are willing to spend over €800 ($916) on a bike. A low-end bike goes for around €60.

"This kind of boom in the bicycle industry has never happened. Even dealers who've been in the business for 50 years have never seen such sales. This is unprecedented," Gupta said, adding that the long hours are wearing him out.

As more cyclists take to the streets of Indian cities, people are starting groups on social media to meet and organize rides. Gurpreet Singh Kharbanda, a New Delhi resident, created a group in early July. It already has 90 members, about 50 of whom are beginners.

"People wanted a break from this monotonous routine during the pandemic. There were no outings and no fitness," Kharbanda told DW. "I wanted to create a sense of community bonding and get more people to be active and take up a healthy lifestyle. It's also a great way to meet new people on rides."

The group mostly meets on weekends and rides around the city. One of the most popular spots for cyclists in New Delhi is the boulevard in front of India's presidential palace, the Rashtrapati Bhavan.

In the eastern metropolis of Kolkata, cycling enthusiasts have banded together to lobby for more bike lanes and promote the benefits of cycling for the community. The group says it wants to remove "obstacles to cycling in Kolkata while inspiring cycling culture in the city."

Shiladitya Sinha, a member and organizer of the group, said that they have also brought a lot of people to the sport of cycling since the lockdown began. Some people come to them having never ridden a bike before.

"As far as Kolkata is concerned, the bicycle boom on one level is a very spontaneous thing, while on another level, it's been a dedicated effort from our side," Sinha told DW. 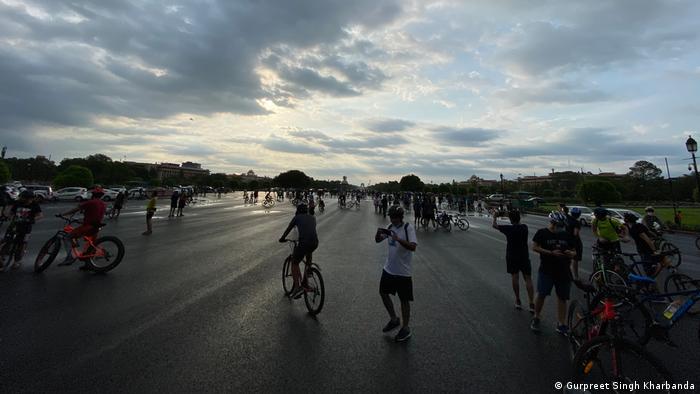 The COVID-19 pandemic has resulted in unprecedented bicycle sales in India, but the boom could be short-lived

Most public transport in Kolkata was suspended by lockdowns. The metro alone carries 700,000 passengers daily.

"People now need private transport more than ever. Most of them cannot afford a car or motorbike, so cycling has become the only option for them now," Sinha said, adding even people who can afford motorized transport are starting to opt for cycling.

India's Housing and Urban Affairs Ministry said the pandemic has presented an opportunity to make cities more accessible to pedestrians and cyclists.

In a June advisory, it recommended pedestrianization of at least three markets in every city and more bicycle lanes.

"Currently cycling is largely seen as something only poor people do. Instead, this needs to become the 'cool thing' the young and educated are involved in," Kumaraswamy told DW.

"This needs to be enabled by ensuring safety on the road and efforts to enhance the comfort of cyclists," he said, adding that most people are scared away from cycling due to safety concerns.

"Dedicated cycling lanes with physical demarcation and segregation from other traffic is essential. We need to redesign street intersections to give priority for cyclists and minimize conflict points and enhance safety," he said.

As lockdowns left commuters without public transport options to travel within the city, cycling provided a temporary solution. But after things get back to normal, rethinking public transport with cycling in mind could make a difference in cities.

Adding cycling to long-distance commutes using buses is one idea. "Better bus transport with good facilities to walk and cycle in the first mile and last mile will help to make our cities more livable," said Kumaraswamy.

How long will it last?

But the brakes could be put on India's bike boom as demand overwhelms supply. Manufacturers weren't prepared to meet the scale and bike shops are running out of stock.

"I have been losing business for the past 4-5 days. I've had to turn back a lot of prospective customers due to lack of stock," said Gupta.

"The supply chain is also going to be hit in the coming months due to the India-China border situation," he added. "Importers are facing a lot of scrutiny and customs are not clearing items. We've been waiting for fresh stock for the past 20-25 days."

A lot of bicycle parts and accessories are sourced from either China or Taiwan.

And despite the current enthusiasm, there is no guarantee that the cycling boom will be permanent. "Many of my customers tell me that they're not going to use the bicycle after one or two months," said Gupta.

The Indian movie legend and his actor son, Abhishek, are in a stable condition after being admitted to hospital. The younger Bachchan's wife Aishwarya and their 8-year-old daughter have also tested positive. (12.07.2020)

As Indians board domestic flights, protocols are being put in place to protect passengers from COVID-19. However, some travelers say they feel unsafe as rules are ignored and airlines play down health risks. (09.07.2020)