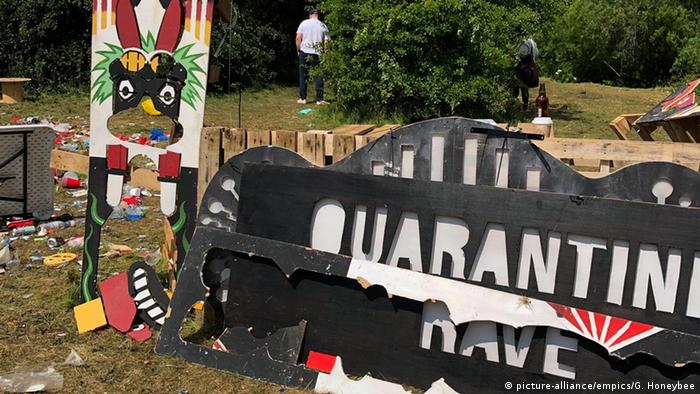 Call them what you will — illegal or unlicensed raves, block parties, free parties, floating parties — there have been mass gatherings of people at music events around Europe this summer, despite the threat of a second wave of coronavirus.

"You can't really do social distancing at raves — it's all about being very close together," says musicologist and sociologist, Beate Peter.

And she's desperate to go clubbing again. "Give me a syncopated beat and I'm there," says Dr. Peter.

She has first-hand experience of rave culture in Germany, where she grew up and studied, and in the UK, where she's a senior lecturer at Manchester Metropolitan University. She has studied the psychology of raving, both professionally and personally, and says she can understand what's motivating people to go raving despite the pandemic.

"The dancefloor is an opportunity to not overthink," she says, but with all that's going on, she says she has "no desire" herself to go out right now. 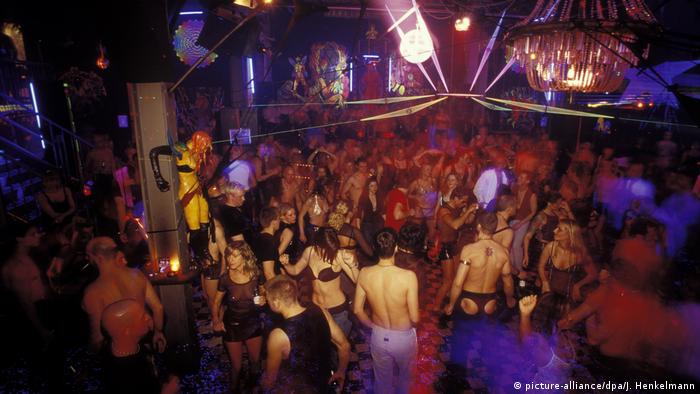 "You would have to completely ignore what's going on, every minute of your life, at the moment. But with my level of awareness of what's happening and the potential dangers, I wouldn't be able to get to a state, where I can get what I want out of a rave," she says.

Academics, says Peter, often focus on a "body-mind dichotomy," and the mind is "favored over the body, time and again." But on a dancefloor, that dichotomy is dissolved or "at least blurred to a certain extent," she says.

"We no longer separate what's happening with the body and what's happening to the mind. They start to form a condition or state, where people express themselves or respond to the music through dance. And dance is the most important element here — you are physically engaged in it. But I'm also convinced that it does something to your mental state. And that is true with or without drugs," Peter says.

Perhaps that is why thousands of people have gathered at raves and block parties in urban Manchester and its rural outskirts, like Carrington, or in London, Berlin, a beach at Porto in Portugal, or the French capital Paris and Nantes. Perhaps it's an opportunity to lose yourself in the dance and forget the pandemic around us.

It is what young people do

Speaking to the Reuters news agency, German DJ Elias Dore said "people are just longing to socially connect," as they would normally spend the summer dancing under the open skies of European festivals.

There is also a certain tradition of covert raves that goes back 30 years or more to the late 1980s. In the UK, where the scene originated, that culminated in the Castlemorton Common Festival. That free rave, as it is described, effectively led to the criminalization of unlicensed raves, and notably any music that heavily featured "repetitive beats" — and a repetitive bass drum, or "kick," is hugely characteristic in rave culture, especially techno. 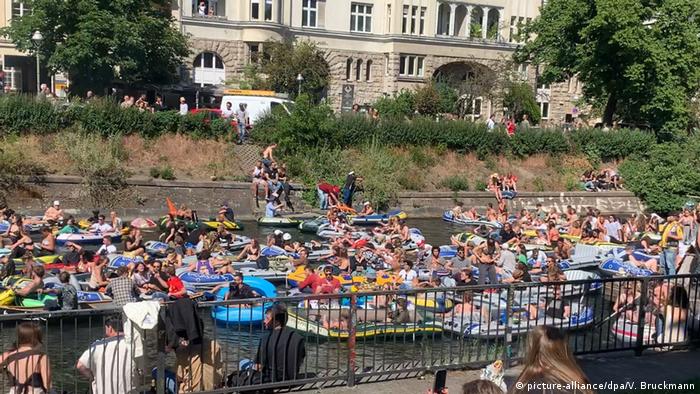 A demonstration on a canal in Berlin, protesting for support for the city's club and rave scene

But for Clifford Stott, a professor of social psychology at Keele University, these mass gatherings at free parties are also a question of fundamental rights.

"Why wouldn't you gather?" said Stott in an interview with DW. "Prior to COVID, we did it all the time. But some people did it more than others and those are predominantly young people. Bear in mind, there isn't anywhere for young people to gather right now. They can't go to nightclubs because they are all shut."

In Berlin, city administrators may try to change that. Ramona Pop, a Berlin senator has reportedly written to district mayors, urging them to find public spaces for open air events that would include Berlin's club and techno scene.

But elsewhere, particularly in the north west of the UK, where a lot of free parties have happened, authorities have closed them down. And that is something that young people will feel "acutely," says Stott.

"They would see gathering and socializing as fundamentally important to who they are," he says. "These free parties are happening in a context of restriction, and of course, by definition, that's an assertion of resistance to those restrictive measures."

Drugs do play a part

Some of the parties in the UK have been reported with tags of criminality — drug use, death by overdose, and stabbings — and Stott says there is some evidence of organized crime groups (OCGs) putting up the money for events and performers.

OCGs may see free parties as a means to gather a "captive audience," as Stott describes it, to sell drugs.

But most people going to those parties probably won't know or care who organized the party and paid the DJ. They will simply want to dance and socialize with other people, including those using drugs. Drugs like MDMA are illegal whether an event is licensed or not, but the law is harder to enforce at a free party, says Stott.

MDMA, or ecstasy, has played an "important role" in rave culture, says Peter, just like LSD in the hippie movement.

In the early years of rave culture, MDMA was often credited for taking the violence out of hooliganism. People also said it allowed them to lower their inhibitions on the dancefloor — not necessarily to a point at which they would do illegal things, or things they might regret later, but simply to allow them to stop worrying about how they appeared to society, or care what society expected of them.

That may be especially potent in an age where people are constantly recording their lives or being recorded by others. Peter says "selfie culture" doesn't allow you to dance like nobody's watching. Or become one with the dancefloor.

"You can't be an observer of what's happening on the dancefloor by using your camera and at the same time completely immerse yourself in the experience, in which you may have 'a dissolution of the ego,' or a connection to other bodies on the dancefloor," she says.

And that sense of connecting with people on the dancefloor — and quite often with strangers — is possibly more important than the drugs that facilitate it. Perhaps especially at a time when we've spent months separated, in isolation.

There are at least two kinds of group dynamics at play on the dancefloor. First, there's the music.

"In rave culture, people dance together to the beat. That's something that people can agree on, what's important to them. It's not the melody, for instance, but the beat," says Peter. "So, they're moving in unison. And somehow a kind of muscular bonding takes place with people you've never met before."

The idea of muscular bonding was coined by a war historian called William McNeill.

It refers to a sense of euphoria and connection felt by a group of people, whether that's troops on a march or civilians on a dancefloor, brought on by rhythmic, synchronized movements, performed unison — something as simple as music and dance. Or a repetitive beat, like a 4/4 kick drum. You can feel that in rave culture. 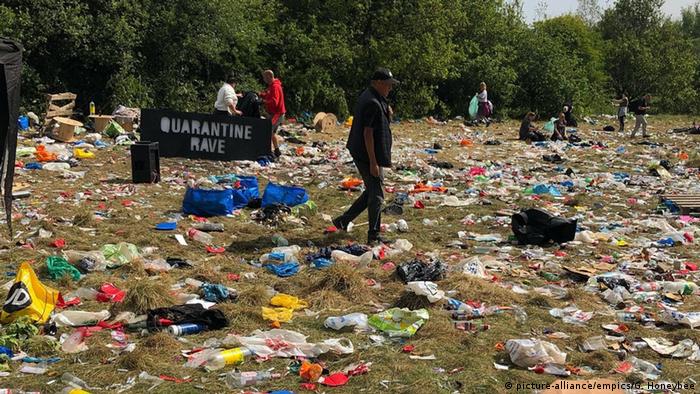 After party: The scene following an illegal rave in Greater Manchester, UK, in June 2020

"That's partly what raves are about. You go into an event and you develop a 'norm of connectedness' with people who are complete strangers," says Stott. "In any other context, they would remain complete strangers. But in this context, there is a form of empathy and enjoyment and solidarity."

And the joy of rebellion

That sense of solidarity can mean a lot of things. Stott says crowd actions, and the group psychology embedded within them, tend to be driven by notions of identity or power relationships between one group and another.

"So, for instance, I am going to a crowd event to protest against this piece of legislation that I don't agree with, but which a government, more powerful than me, has imposed upon me. Or I am going to a rave because I want to go out and the authorities say that I can't, but you know what? F**k you, I'm going out!" says Stott. "There is an assertion of power in that." 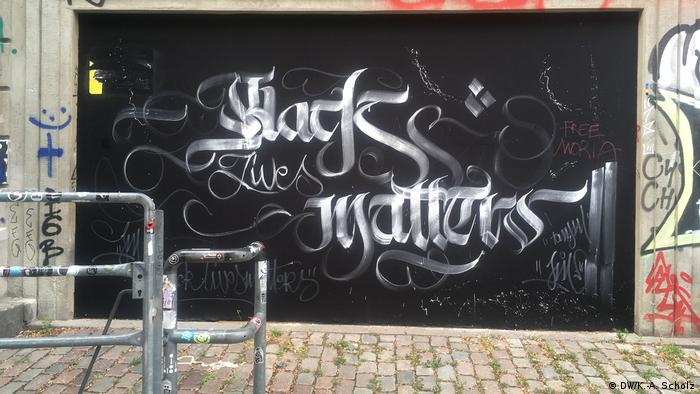 Berlin's famous Berghain club — shuttered. As Beate Peter puts it, "You can't do social distancing on the dancefloor"

By coming together, says Stott, a group can assert a power that isn't available to its individual members when they act alone. By acting collectively, the group can turn itself "from the disempowered into the powerful."

"And there is a lot of joy in that," says Stott.

If you analyze riots, he says, you tend to find they are often driven by anger, initially. But once people actually start to riot, the overwhelming emotion is joy. Not anger.

Same as you do on the dancefloor.