An extra 1.5 million apartments and houses must be built in Germany, says Chancellor Angela Merkel. Her commitment to alleviate rental and property price hikes and ease shortages is timed to be fulfilled by 2021. 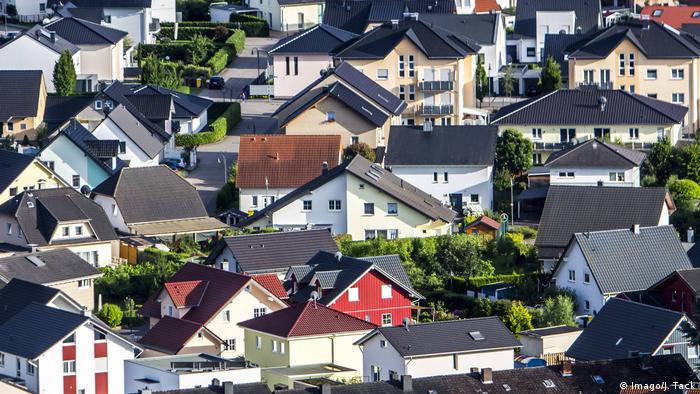 Chancellor Angela Merkel said Germany "urgently needed" extra affordable housing and used her weekly video podcast Saturday to reel off a series of steps — outlined in February as her coalition took shape — to get it built before the next federal elections in 2021.

At the same time, the board chairman of Germany's BA Labor Agency, Detlef Scheele, told Stuttgart-based SWR public broadcasting that affordable housing had become the "burning topic of our times."

It would include measures to strengthen tenants' rights and to assist landlords when modernizing their rental properties, she added.

Grants for families with children

Would-be parents should not be forced to decide between having children or acquiring property, Merkel insisted, saying part of the remedy lay in her Cabinet's planned housing grant for children (Baukindergeld).

Parents would receive €1,200 per child annually, for ten years, when they built or purchased a house, assuming their taxable income lay below €75,000.

Parents would also be able to claim an exemption on taxable income of €15,000 for each child.

The situation in Germany's metropolitan hubs would "hopefully relax somewhat," she predicted.

Developers of new rental housing catering for the "middle segment" — defined as being about €10 per rented square meter per month — would also get special tax dispensation.

Landlords wanting to modernize their rental properties would also benefit from levies readjusted so that work was not done in the "wrong direction," Merkel added.

Merkel on Saturday also reiterated a February coalition proposal to allow municipalities to apply a dissuasive tax on owners of vacant land who leave their plots unused, hoping to speculate on future windfall sales.

This so-called Grundsteuer C [land tax C] was applied from 1961 until 1963 but then dropped as the era of Merkel's distant conservative predecessor Konrad Adenauer ended.

Tenants who suspected a rent hike was being imposed would be entitled to learn how much the rent was previously, Merkel said, to improve the application of law intended to restrain neighborhood tenancy prices.

Immigrants with limited German are among those most at risk of facing life on the street. Now, a new site offers information in multiple languages so people of all backgrounds can know their rights and recourses. (02.04.2018)