As she turns 65 on July 17, DW looks at how the German Chancellor has been depicted by artists. Across nearly 15 years in high office, Angela Merkel has graced everything from "Time" magazine to city street art walls.

When Chancellor Angela Merkel presumably resigns her post in 2021 at the latest, she will join the Gallery of German Chancellor portraits in the capital. But it won't be the first time her likeness has appeared on canvas. As Merkel turns 65 on July 17, the milestone will be accompanied by ever more images of a popular yet demure leader whose inscrutable gaze had been captured by artists, cartoonists and photographers the world over.

When Chanceller Merkel was voted "Person of the Year" by Time magazine in 2015 due to her humanitarian stance on the refugee crisis —  the publication also dubbed her the "Chancellor of the Free World" — the cover image was an oil painting by Irish artist Colin Davidson.

It was a flattering depiction of a morally principled leader at a time of great upheaval, and was followed in 2017 artist Elizabeth Peyton's finely hued portrait of the Chancellor as a younger woman in Vogue magazine.

The fact that politicians can be stylized into modern icons in art was proven by the iconic portrait of former president Barack Obama by artist Kehinde Wiley — the first African American to paint an official presidential portrait. 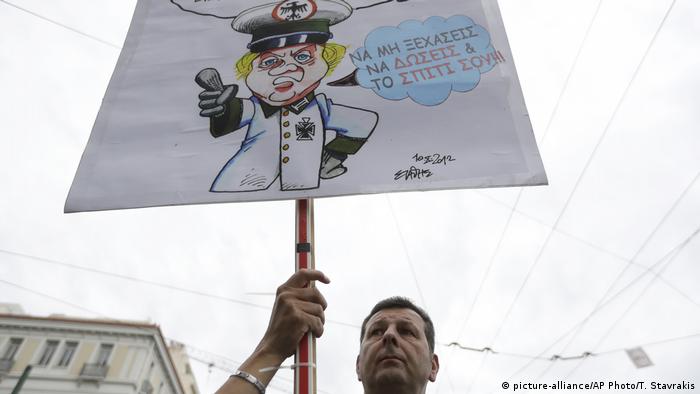 In a bad light: An anti-austerity protester in Greece in 2017 holds a placard with a cartoon of an authoritarian Chancellor Merkel reading: "Don't forget to give up your home, too."

The Chancellor has amply demonstrated her affinity for art , not only as a regular visitor to operas and the Wagner Festival in Bayreuth, but her willingness to sit for photographers including Herlinde Koelbl and Andreas Mühe.

But artists have also taken a critical look at her political choices —  especially in the debate over Germany's handling of the EU financial crisis and the imposition of harsh austerity measures in countries like Greece.

Click through the picture gallery above to see how diverse artists have immortalized the German Chancellor.

How Angela Merkel is depicted in art

Angela Merkel has been sworn in as Germany's chancellor for the fourth time. Before she appears in the chancellors' gallery of portraits, here's how other iconic works of art have already represented her. (13.03.2018)

A Dutch theater has staged a "Wagnerian electro-opera" about German Chancellor Angela Merkel, a "woman whom nobody really knows." The play focuses on struggles she faced during her career, and her upcoming departure. (29.03.2019)

Angela Merkel has been named Time magazine's '2015 Person of the Year.' The magazine's editors are full of praise for the German chancellor's policies. Felix Steiner views them more critically. (09.12.2015)