Angela Merkel has been named Time magazine's '2015 Person of the Year.' The magazine's editors are full of praise for the German chancellor's policies. Felix Steiner views them more critically. 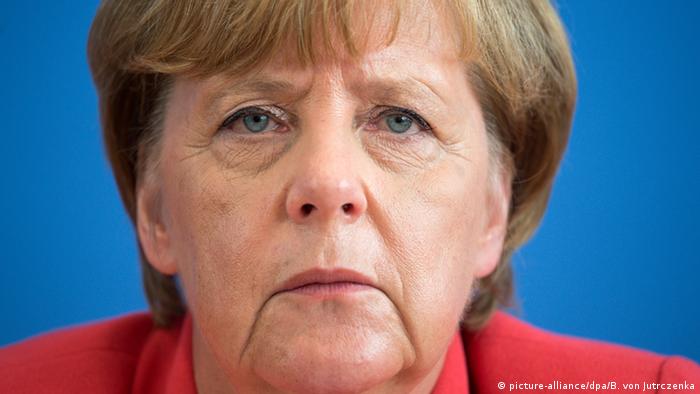 Do you know who was named Time magazine's "Person of the Year" in 1938, 1942 and 1979? Or, who was runner-up to Angela Merkel this year? The answer is a pretty, little gallery of history's most detestable persons, past and present: Adolf Hitler, Joseph Stalin, Ayatollah Khomeini and Abu Bakr al-Baghdadi, the leader of the terror organization "Islamic State."

That makes clear that Time magazine's distinction is not solely about honoring that which is good, noble and beautiful. It is simply about distinguishing those people that Time's editorial board feels have had the most influence on world affairs - good or bad.

The special values of a preacher's daughter

Naturally, Time is inferring that the chancellor has done good things. That sentiment is expressed in the lovely honorary title gracing the magazine's cover, "The Chancellor of the Free World." A title that on the other hand says nothing special - the number of countries that call their head of government "chancellor" is rather limited.

The editors at Time refer to that goodness repeatedly in their pompous supporting letter: They write of her "steadfast moral leadership" of an entire continent - in the crisis in Ukraine, the euro crisis, the acceptance of innumerable refugees, and now her commitment to the war on terror following the Paris attacks. They also get specific, writing about the different set of values that guide the pastor's daughter Merkel: "Humanity, generosity, and tolerance." Would Greek pensioners and unemployed sign-off on that statement?

The most beautiful passage states: "It is rare to see a leader in the process of shedding an old and haunting national identity." Unfortunately, the question of exactly who is being haunted by what goes unanswered. Perhaps a group of politically left-leaning, intellectual, high-income earners in a nation that is taking in hardly any refugees?

In any case, the German voting public is rapidly losing faith in Merkel. And the haunted ones are the cities and municipalities that are being forced to take in ever more refugees and have no idea how they will ever be able to house and care for them.

The EU fractured as ever

Many European neighbors, too, found the "old," predictable Germany much more likable than the major power with Merkelian traits. The strength of Germany's EU diplomacy this year did not make up the balance - not in the euro crisis and most definitely not in the refugee crisis. "Moral Imperialism," was the accusation hurled at the chancellor by Hungarian Prime Minister Viktor Orban, and he is finding more allies that share that opinion. However, Angela Merkel seems to be unfazed by the harsh criticism currently being leveled against her policies. In December 2015, the EU as a political entity capable of acting, exists only on paper. Is that what good leadership looks like?

The editors at Time magazine need not be bothered by all that. They have - see above - given the distinction of "Person of the Year" to entirely different types of people. The objective at Time's New York headquarters is simply to produce a year-end issue that sells a lot of copies. And there is no denying that Angela Merkel's great societal experiment has something fascinating about it. Though one can perhaps view the experiment in a much more relaxed fashion from the other side of the Atlantic than here in the heart of Europe.

The influential US magazine has named the German Chancellor Angela Merkel its 'Person of the Year.' Each year the magazine recognizes one person, group or idea that has impacted society. (09.12.2015)

Germany's states are blaming the federal government for not processing asylum applications quickly enough, and the government says it's doing fine. Critics say much bureaucracy could be cut - like the Dublin procedure. (07.12.2015)

"Europe is in better shape today than it was ten years ago," Angela Merkel's Chancellery Minister and refugee coordinator Peter Altmaier told DW's Conflict Zone. Is it really? (09.12.2015)