Germany's states are blaming the federal government for not processing asylum applications quickly enough, and the government says it's doing fine. Critics say much bureaucracy could be cut - like the Dublin procedure. 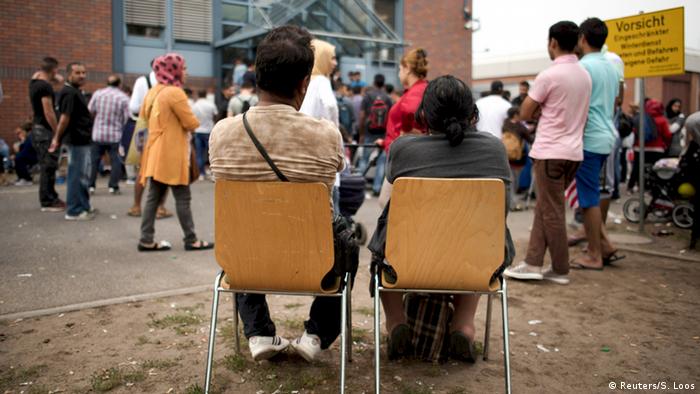 Germany's federal government on Monday sprang to the defense of its most beleaguered authority, the Federal Office for Migration and Refugees (BAMF), after the states criticized BAMF officials for taking the weekend off in the midst of the worst refugee crisis since World War II.

"Working from Monday to Friday - that's not good enough in these times anymore," Malu Dreyer, state premier of Rhineland-Palatinate, told Sunday's "Bild am Sonntag" newspaper. "In the districts and the states employees are working shifts, at weekends, and doing overtime - the BAMF has to do that too."

"You can certainly work on Saturdays and Sundays too," said Roger Lewentz, Dreyer's interior minister added, while his counterpart in North Rhine-Westphalia Ralf Jäger threw in: "Refugees can't just stick to office hours of 8 a.m. to 4 p.m." 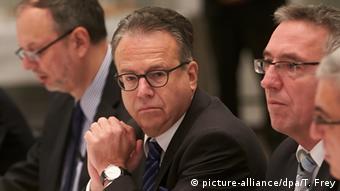 The retort to this barrage came on Sunday evening from Angela Merkel's Chief-of-Staff Peter Altmaier, doubling as the federal government's designated refugee coordinator. "I don't think it's expedient for whoever to make political declarations on the backs of employees of the federal office," Altmaier said on state TV network ARD, apparently peeved that all these criticisms happened to come from members of the Social Democratic Party. "We all know that we have to get even better, because the numbers have risen so quickly in the last few months. But we're getting there."

Stephan Dünnwald of the Bavarian Refugees Council thinks this is disingenuous. "The federal office says the length of time is all good, but that only works because they're counting from when the application is submitted," he told DW. "But that isn't happening right after arrival - that is happening months later. This means the people are sitting here for half a year before they're even registered by the BAMF."

Altmaier was backed up by Federal Labor Minister Andrea Nahles, who took to Germany's other main public broadcaster ZDF on Sunday to point out that 4,000 additional officials would be starting at the BAMF in January to deal with the backlog (it currently has around 3,300 employees). In an emailed statement to DW, a BAMF spokeswoman said the personnel capacity of the BAMF had increased by 20 percent in the second half of this year, and would be doubled by the end of 2016 - and that 31,000 people had already applied for the jobs. 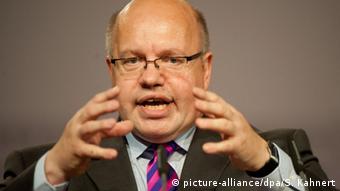 Altmaier thinks the BAMF is doing a fantastic job, given the circumstances

The latest row originally erupted on Friday, when BAMF boss Frank-Jürgen Weise delivered his situation report to the assembled interior ministers of Germany's 16 states. The meeting happened behind closed doors, but ministers offered a withering verdict in a subsequent press conference. "It was in large parts disappointing, in some places even alarming," NRW's Ralf Jäger said of Weise's report. "Mr. Weise could not tell us, on repeated questioning, how many asylum decisions the BAMF would complete this year."

The current figures - as reported by Weise to the interior ministers - are indeed dizzying. Authorities are making around 1,700 decisions a day (up from 1,000), but that, according to the ministers, is still not even half as many as are being submitted a day. In other words, a backlog of more than a thousand asylum applications is mounting daily. According to a new Federal Interior Ministry report quoted in the "Passauer Neue Presse," at the end of November 2015 there were still 355,914 unprocessed asylum applications out of a total of 425,035 submitted applications this year.

As if to twist the knife, even the European Parliament weighed in on the row between the government and the states on Monday. "Despite years of complaints from the states and the districts, Federal Interior Minister Thomas de Maiziere has not managed to implement the administrative rules and get the asylum applications processed quickly," the parliament's President Martin Schulz told "Die Welt" newspaper. "The minister has to do what the government has agreed on, then things will work out better." 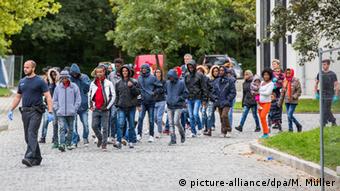 Some refugees are waiting months to even be registered

But Dünnwald says the blame-flinging doesn't explain the story. "I don't know how they would solve it by working eight hours on Saturday and Sunday," he said. "I think then the sick leave will go up - those poor people are already at their limits."

Dünnwald thinks there are better ways to reduce the pressure on the BAMF - by reducing procedures that require cases to be constantly re-assessed. "All the things that make a lot of work where there's little success could be suspended for now. The Dublin process is a lot of work," he said. "About seven percent of those that could be moved actually are - it's a huge bureaucratic procedure: there's a request to this state, to that state, there are many court cases, all sorts of things."

"And on top of this, the BAMF is also responsible for the appeal processes," he added. "After three years of residency, every single asylum case has to be re-assessed to see whether the grounds for asylum still exist. In 95 percent of cases they say: yes they do. That's a massive burden on the BAMF where they could say: 'Okay, we're going to suspend that for now'."

Dünnwald also thinks the states could help ease pressure on the BAMF by taking some of the work in assessing whether Syrian refugees are really Syrian. "People are already being registered three or four times before they even get registered by the BAMF," he said. "They could do that check at the state reception centers with a translator. Instead, the BAMF now has to do it - that's another 120,000 or 150,000 new procedures."

"The BAMF is currently the eye of the needle," Dünnwald said. "Because things aren't moving there, the whole process is slowing down - the new arrivals can't work, can't do German lessons, or whatever."

The latest official numbers reveal that a total of 964,574 refugees had arrived in Germany by the end of November 2015. Critics say that their asylum applications aren't being processed fast enough. (07.12.2015)

Iraq asks Germany for help in fight against 'Islamic State'

Iraqi PM Haider al-Abadi has asked German Foreign Minister Frank-Walter Steinmeier for further assistance in the fight against the "Islamic State," saying terrorism is "not only a threat to Iraq, but also to Europe." (07.12.2015)