"Europe is in better shape today than it was ten years ago," Angela Merkel's Chancellery Minister and refugee coordinator Peter Altmaier told DW's Conflict Zone. Is it really?

Peter Altmaier said Germany had had successes dealing with three crises: Europe's debt woes, the Ukraine conflict, and even the arrival in Germany of huge numbers of refugees.

That's despite the latest figures which show one million refugees were estimated to have entered Germany by November 2015, and as pressure mounts on Merkel, both from with her party and from other European governments.

"Germany has been part of the solution, not the problem. (...) We now have an agenda on migration. There are some divisions, I admit. But you don't get unanimity between 28 countries," Altmaier insisted.

He dismissed any suggestion that Germany had engaged in political coercion in its handing of the refugee crisis. “Germany,” he insisted "is part of the solution, not the problem."

On top of that, two in three Germans believe the government is doing a bad job in handling the situation, according to a recent Emnid poll.

But Altmaier said action was essential: "We had to make difficult choices. When there are tens of thousands of refugees moving across six or seven countries ... do you think you could stop these people by forcing them to return?" 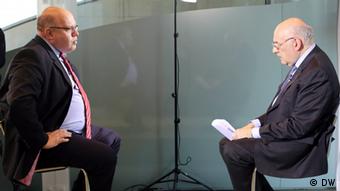 Peter Altmaier is this week's guest on Conflict Zone with Tim Sebastian.

And he echoed Merkel's optimism: "The option to overcome the refugee crisis is cooperation, burden-sharing amongst European countries ... organizing a better asylum and refugee policy, developing better protection of the external borders of the EU."

Peter Altmaier is Chancellery Minister in Angela Merkel's cabinet - something like the Chancellor's chief of staff - as well as the government's coordinator on refugee policy. He studied law at Saarland University and joined the CDU party in 1976.

Is Merkel's strategy of open doors for large numbers of refugees viable, or just naive? Learn more on December 9th.

An increasing number of Germans have expressed anxiety about the number of refugees entering the country, according to a new survey. Vice Chancellor Sigmar Gabriel has called for an open discussion of people's fears. (02.10.2015)

Coordination of Germany's refugee crisis has been shifted from the Interior Ministry to Angela Merkel's chancellery. Still, the government has denied that Interior Minister Thomas de Maiziere has been demoted. (07.10.2015)

The ongoing refugee crisis could result in a stronger Germany, the country's new coordinator for refugees says. But he called for migrant policy to be streamlined to allow a focus on those who needed the most help. (11.10.2015)