The latest official numbers reveal that a total of 964,574 refugees had arrived in Germany by the end of November 2015. Critics say that their asylum applications aren't being processed fast enough. 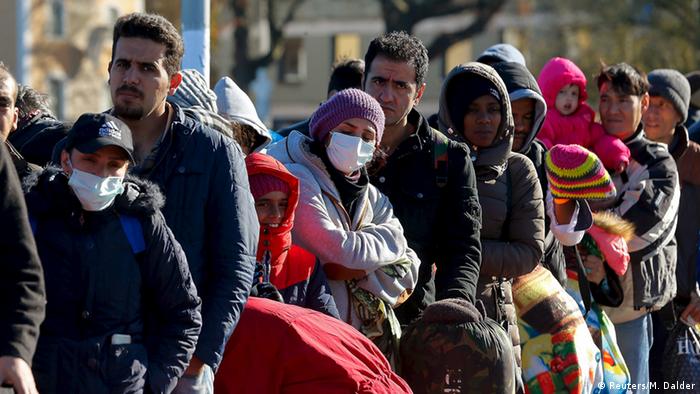 Germany's Interior Ministry announced the most up-to-date number of migrants in the country in response to an official request filed by a parliamentarian, Reinhard Brandl, who is a representative of the Bavarian Christian Social Union (CSU) party.

Based on the figure of 964,574 refugees arriving in Germany to date this year, authorities expect the total number of migrants to likely exceed one million by the end of 2015. In comparison, 2014 saw 238,676 migrants coming to Germany - slightly less than a quarter of the current figure.

The report also said that there were 206,101 refugee arrivals in the month of November alone, exceeding all previous months in 2015.

The bulk figures were obtained using the countrywide "EASY" registration system for new arrivals, which counts people as they enter the country, often long before their paperwork starts being processed.

Some parliamentarians meanwhile criticized the slow pace in dealing with asylum applications, as more refugees continued to arrive in Germany, despite a major hiring spree across various government departments dealing with the migrants.

At the end of November 2015, there were 355,914 unprocessed asylum applications out of a total of 425,035 applications submitted to date. Corresponding numbers from the previous year were less than half that, with a total of 169,166 applications processed out of 202,834.

Leader of the Green Party Anton Hofreiter told the "Passauer Neue Presse," a daily newspaper published in southern Germany, that the Office for Migration and Refugees (BAMF) should introduce shift work to allow staff to process applications around the clock as well as expand their core working hours.

German Interior Minister Thomas de Maiziere meanwhile told the weekly "Bild am Sonntag" that he was confident that the speed of processing asylum applications would accelerate in coming months, referring to yet another 4,000 jobs created with BAMF in response.

German state interior ministers have agreed to resume individual asylum assessments for refugees. Some have claimed the controls are crucial for security, while others have criticized the move as a 'gamble' with lives. (03.12.2015)

Angela Merkel has called for Europe to unite to help refugees and fight terrorism. The German chancellor made her remarks at the annual conference of her right-wing coalition partnerd, the Christian Social Union. (20.11.2015)