Angela Merkel has called for Europe to unite to help refugees and fight terrorism. The German chancellor made her remarks at the annual conference of her right-wing coalition partnerd, the Christian Social Union. 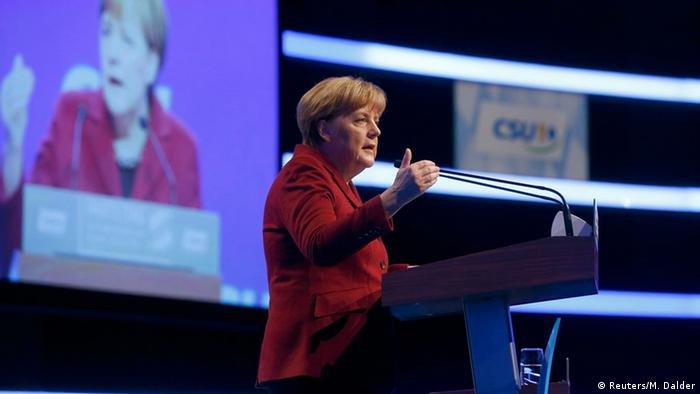 At the Christian Social Union party conference Friday, Merkel called the arrival of hundreds of thousands of refugees "perhaps the biggest challenge we have had since German unification." The CSU is the more right-wing, Bavarian sibling party of the chancellor's Christian Democrats (CDU), and Merkel's calls for European unity seemed as much intended to bridge a growing gap within her own coalition.

"Today our country is stronger than ever, our economy is growing soundly, our labor market is robust," Merkel said on Friday, noting that a reunified Germany had just celebrated 25 years last month. "Just imagine what Germany would be like without our parties."

The CSU has led criticism of Merkel's asylum policy, and many had expected the chancellor to defend her decision to allow Germany to take in hundreds of thousands of refugees fleeing contact this year. Defend them she did, although she appeared to give several verbal concessions to the CSU's calls for a less-open door.

"No one leaves their home lightly, not even those who come to us to pursue a better life economically, who cannot stay with us here, who do not require protection," Merkel said, referring to so-called economic migrants. To scattered applause - and her speech seemed to have few applause points - Merkel added that "we will have to return them, we will have to deport them, even if it can be done with a friendly face."

Merkel also took a moment to express Germany's solidarity with the victims of recent attacks in Paris and Mali. "We will be investigating all of these crimes," the chancellor said. And, referring specifically to last week's multipronged assault in France, she said: "This attack on liberty wasn't just an attack on Paris - we are all the targets."

Ahead of Merkel's speech in Munich on Friday, CSU leader and Bavarian State Premier Horst Seehofer again demanded limits on the numbers of asylum applicants who enter Germany. Merkel's decision to open the borders to refugees fleeing conflict and unsustainable conditions in Africa and the Middle East has triggered tensions between the chancellor and CSU leaders.

A key motion for the roughly 1,000 delegates attending the CSU congress called for a fixed refugee quota. However, the motion did not set out a specific number.

"However you look at it, there is no other way than to introduce a limit or a ceiling," Seehofer said on Friday. In the past, Merkel's Bavarian counterpart has described the chancellor's refugee policy as "a mistake."

On Friday, Merkel said there would be no limit. The chancellor has repeatedly rebuffed calls from CSU leaders to place an upper limit on the number of refugees entering Germany, which in recent weeks had reached about 10,000 a day. The state of Bavaria, which borders Austria, has become a primary entry point for people reaching Germany via Southern Europe.

Speaking in Bavaria on Friday will not prove Merkel's last intracoalition challenge for the year. Next month comes the annual conference of her CDU, in which her stance on refugees has also come under fire. Many analysts see the tensions between Merkel and the CSU as contributing to the recent slide in support in opinion polls for the CDU-CSU bloc.