An increasing number of Germans have expressed anxiety about the number of refugees entering the country, according to a new survey. Vice Chancellor Sigmar Gabriel has called for an open discussion of people's fears. 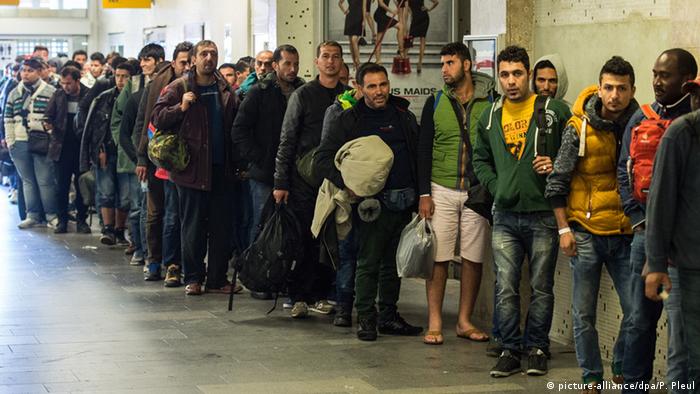 A poll conducted on behalf of public broadcaster ARD and several German newspapers found a change in German attitudes towards the refugee crisis, with a rise in the number of people afraid that too many refugees are entering the country.

An ARD-DeutschlandTrend survey carried out at the end of September found that 51 percent were worried, compared with 38 percent a month earlier. Meanwhile there was a decline in the number saying they were not concerned, from 59 percent to 47 percent.

The poll showed regional differences, with 59 percent of those in the former East German states expressing anxiety, compared with 48 percent in the former West. 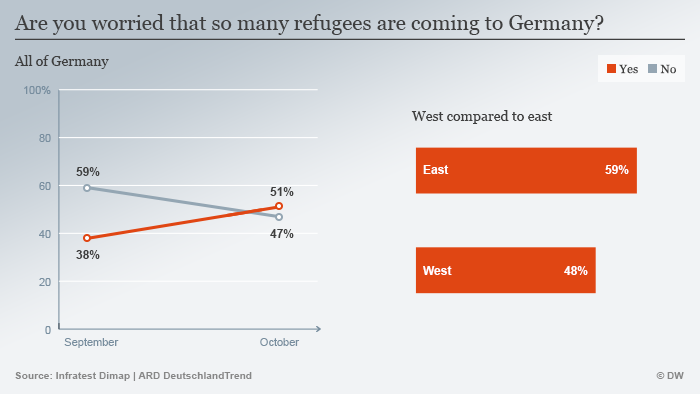 Pollsters also found a rise in skepticism over immigration in general, with 44 percent of participants now saying that immigration brought with it more disadvantages than advantages. Previously 33 percent held such a view, according to the survey.

Slip in the polls

The survey also noted there had been a slight fall in the popularity of Chancellor Angela Merkel's Christian Democrats and its Bavarian sister party, the CSU, with 42 percent of voters backing the party compared with 44 percent a month earlier.

The poll found a steep drop in Merkel's personal poll rating in the past month, down 9 percent to 54 percent. The chancellor waived rules for Syrian refugees in late August, allowing them to claim asylum in Germany rather than the first EU state in which they arrive. Critics have claimed that the policy led to a rise in the numbers seeking refuge in Europe and encouraged migrants from other countries to travel across Europe to Germany.

Notably, CSU leader Horst Seehofer, who has been a vocal critic of Merkel's refugee policy, saw a rise in popularity to 39 percent, compared with 28 percent at the end of August.

Meanwhile, German Vice Chancellor Sigmar Gabriel called for an open discussion of the issue of refugees in Germany to address the fears of some among the German population. "There must not be an atmosphere in which anyone who has concerns is regarded as xenophobic or a right-wing extremist," he said.

Extremists sought the opportunity to exploit people's fears, said Gabriel. "They will not be successful if we speak openly about problems," he added.

However, Gabriel admitted there were "practical limits" to the number of refugees Germany could accommodate.

"Many places in Germany are already overwhelmed," he said in comments published Friday on the website of Der Spiegel news magazine. "We are approaching the limits of capabilities at a phenomenal rate."

In neighboring Austria, the Freedom Party recently made striking gains in regional elections amid fears over the migrant crisis.

German Interior Minister Thomas de Maiziere on Friday said that some 30 percent of refugees entering the country and claiming to be Syrians were in fact from other places.

"We're seeing fake Syrian passports, and there are signs of people claiming to be from Syria who don't speak a word of Arabic," said de Maiziere.

De Maiziere also said he had noticed a change in attitude among some refugees who had reached Germany.

"Until the summer, the refugees were thankful to be here," he said in a TV interview on Thursday. "They asked where is the police station, where are the federal offices, where will you send us. Now there are many refugees who think they can choose where they go. They strike because they do not like the accommodation; they cause problems because they do not like the food."

He later emphasized that such behavior was confirned to just a minority of refugees, but added that whoever came to Germany had to observe its laws.

Attacks by far-right extremists on refugee housing and brawls in hostels would both be treated as individual incidents, he said.

The majority of refugees were people seeking help. Prejudices were ill-founded, he added.

The head of Germany's police union, Rainer Wendt, said there was a danger that the situation in the country's homes for asylum-seekers could get out of control. He told the mass-market "Bild" newspaper that there were "targeted and well-prepared ethnic or religious confrontations" in German refugee shelters on a near daily basis.

In an interview published in the German newspaper Die Welt on Friday, Germany's Finance Minister Wolfgang Schäuble called for a common European asylum law for the continent to deal with the influx.

He said the introduction of such a law should be "a question of months rather than years but, again, first we need to get access to Europe under control at the moment."

Schäuble said Germany was prepared to hand over control of its national asylum policy, and that he believed France would also be willing. He added that Greece and Italy - two main entry points for many refugees - could likely also be persuaded.

The European Union's interior ministers have agreed on a plan to distribute 120,000 people between the bloc's member states. The agreement comes despite protest from several eastern European countries. (22.09.2015)