Alarmed, but willing to help: How Germans feel about the surge of refugees | Germany | News and in-depth reporting from Berlin and beyond | DW | 04.09.2015

West and East Germans tend to view the flood of refugees currently pouring into the country differently. East Germans, a survey shows, tend to be more anxious. 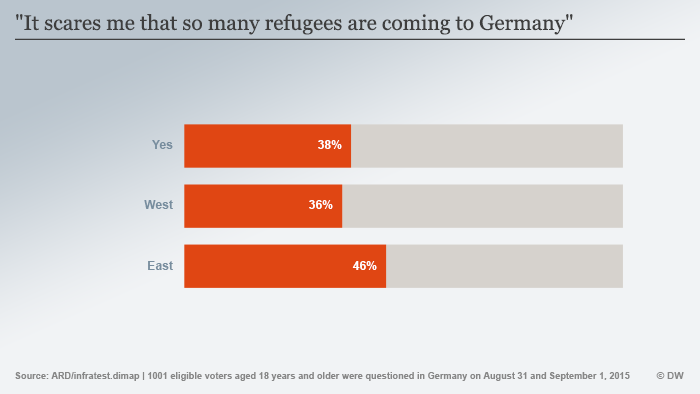 How do Germans actually feel in view of the many refugees in the country, and the many thousands still on their way?

Deutschland Trend, a survey published Friday and conducted by pollsters Infratest dimap for Germany's public broadcaster ARD, shows that while 59 percent aren't anxious, 38 percent of those questioned nationwide said they are alarmed in view of the large number of refugees in the country.

In the EU, Germany takes in the largest absolute number of people fleeing war in the Middle East and economic migrants from southeastern Europe.

A closer look at differences between the country's west and former Communist east shows that more East Germans expressed alarm than West Germans. 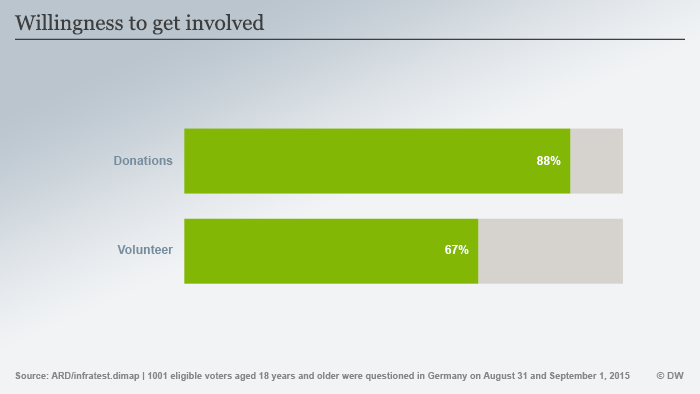 Despite those figures, many Germans are overwhelmingly prepared to do their bit to help: 88 percent said they would donate clothing or money for refugees, or have already done so.

And 67 percent said they would volunteer in refugee projects, or already are involved.

Nine out of ten Germans interviewed for the survey favored introducing a quota that would distribute refugees to all 28 EU member states. Almost as many, 85 percent, would like to see the introduction of legal options for entry into the European Union to spare asylum seekers the risky journeys. 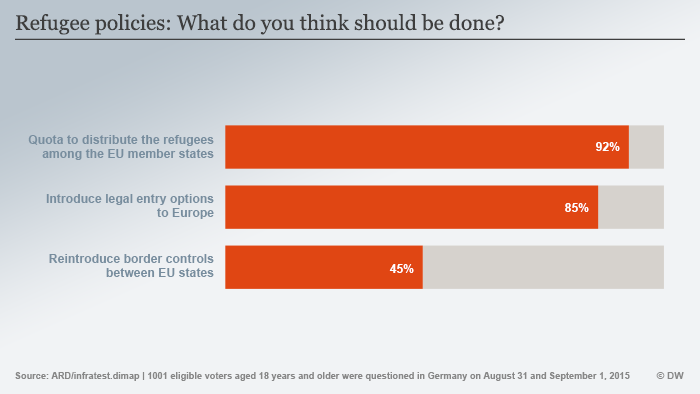 On the issue of reintroducing border controls, more people rejected the idea than favored it, 52 percent, and 45 percent respectively.

Asked whether Germany should continue to take in as many refugees as it currently does, 37 percent said 'yes' - three percent more than in a similar survey last month. Twenty-two percent said Germany should accept even more refugees, which is down one percent from last month's survey. Almost one out of three urged accepting fewer refugees, a figure that is down 5 percent from last month. Here, again figures differ greatly between east and west: 45 percent of East Germans would like to see the number of refugees reduced compared to 30 percent of West Germans.

About 800,000 people are expected to request asylum in Germany his year - four times as many as last year. 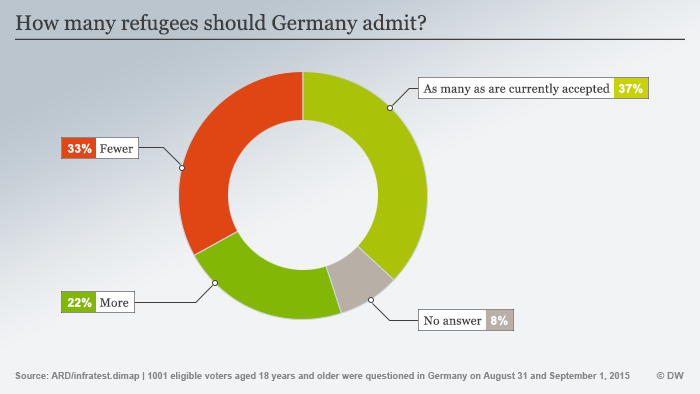 With regard to anti-immigrant protests and a spate of arson attacks on refugee shelters, one out of two Germans was critical of the authorities, saying they don't do enough to protect foreigners and asylum-seekers from xenophobic attacks. Forty percent said the authorities are sufficiently active. 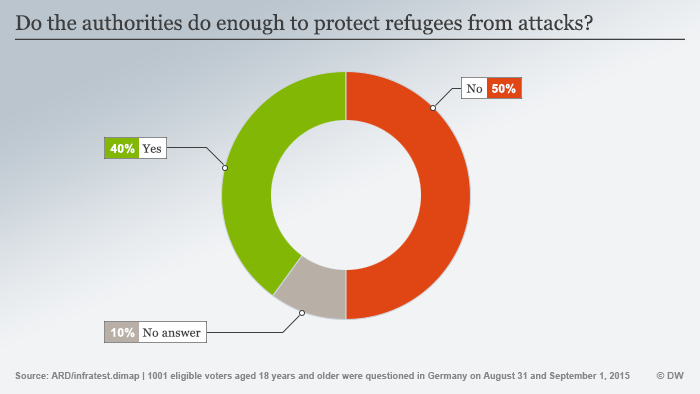 Germans also take a critical view of Angela Merkel's slow reaction to the refugee crisis: more than one out of two felt the Chancellor hasn't acted appropriately so far, and almost as many held the same opinion of Interior Minister Thomas de Maiziere

While the Chancellor is still held in high esteem in Germany, her approval ratings slip by 4 points from the previous month to 63 percent in the most recent ARD Deutschland Trend poll - her lowest rating in this survey since December 2012.

The United Nations (UN) High Commissioner for Refugees has called for up to 200,000 refugees to be shared across the European Union. Various meetings are due to be held across the EU to discuss the crisis. (04.09.2015)

The UN's human rights panel on Syria has demanded that outside powers stop shipping arms to the warring sides and develop more 'legal channels' for refugees. The grinding 4-and-half year war has claimed 250,000 lives. (03.09.2015)