The United Nations (UN) High Commissioner for Refugees has called for up to 200,000 refugees to be shared across the European Union. Various meetings are due to be held across the EU to discuss the crisis. 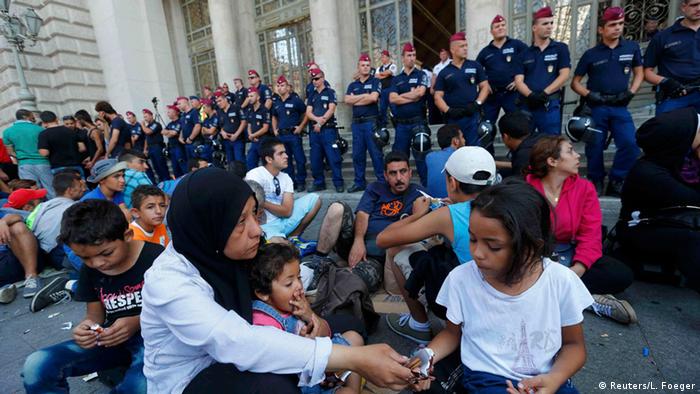 Antonio Guterres, UN High Commissioner for Refugees, said on Friday that EU member states would be bound to the "mass relocation program."

"People who are found to have a valid protection claim ... must then benefit from a mass relocation program, with the mandatory participation of all EU member states," Guterres said in a statement.

A European source told AFP news agency that European Commission President Jean-Claude Juncker would next week unveil a plan for the relocation of at least 120,000 more refugees.

Guterres' call on Friday followed similar demands from Germany and France for a binding EU quota on the number of refugees taken in by each member state.

"So many refugees are arriving at our external borders that we can't leave Italy or Greece alone to deal with the task," German Chancellor Angela Merkel said.

"Neither can it be that three countries, like Sweden, Austria and Germany, are left alone with the lion's share of the task," she added.

Ahead of the weekend, EU foreign ministers were due to meet in Luxembourg on Friday to discuss the unprecedented refugee crisis.

Members of the Visegard group - which includes Hungary, Slovakia, the Czech Republic and Poland - also planned talks in Prague to coordinate the group's position within the EU.

The group appears to be increasingly distancing itself from the other EU member states, however, with Hungarian Prime Minister Viktor Orban describing the crisis on Thursday as a "German problem," as opposed to a European one.

"Nobody wants to stay in Hungary, neither in Slovakia, nor Poland, nor Estonia. All of them would like to go to Germany," he said. "Our job is only to register them."

Poland warned on Friday that the EU must tackle the causes behind the huge migrant influx or risk being inundated with millions of refugees.

"The scale of the migration is enormous, so we can't focus - I'm talking about the whole of Europe - on allocating illegal migrants without fighting the causes [of their arrival]," Schetyna told private Radio Zet.

"We have to think of how to stop the illegal migration. Otherwise [we may have] soon have 3-4 million economic refugees," he added.

Thousands of refugees - most of them Syrian - have been stranded in Hungary since the beginning of the week, after Budapest refused to let them travel across the border to Austria or Germany.