Merkel and Hollande call for refugee distribution quotas in Europe

German Chancellor Angela Merkel and French President Francois Hollande have agreed on a proposal for a mandatory program to distribute refugees among EU countries. The move reflects a change from the French side. 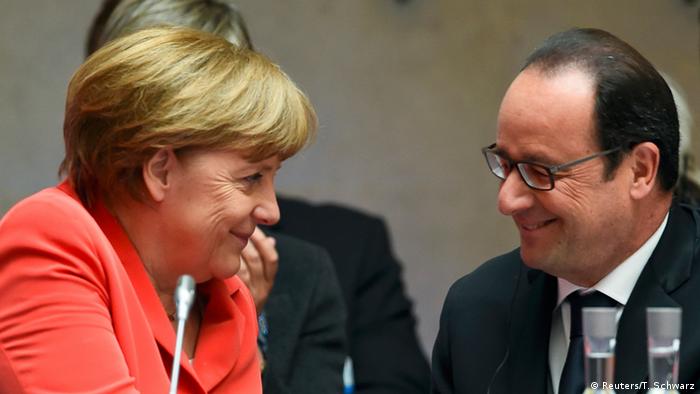 French President Francois Hollande stated on Thursday that he agreed with Angela Merkel on the proposal for a refugee distribution quota. In the past, France repeatedly refused mandatory quotas for sharing the number of refugees among the countries of the European Union.

Merkel and Hollande announced that their proposal would be sent immediately to the EU institutions in Brussels.

Speaking in the Swiss capital Berne, German Chancellor Angela Merkel underlined that the burden of taking on hundreds of thousands of refugees could not fall on just a few European countries. She called for quotas in order to ensure a fair distribution.

Merkel also argued that the EU's so-called Dublin rules, which require migrants to apply for asylum in the first EU state they reach, were not working anymore. "So many refugees are arriving at our external borders that we can't leave Italy or Greece alone to deal with the task," Merkel said.

"Neither can it be that three countries, like Sweden, Austria and Germany, are left alone with the lion's share of the task," Merkel added.

Germany is preparing for about 800,000 asylum seekers to make applications this year, making it the biggest host for refugees in Europe. Sweden and Austria have also taken in more refugees per capita than most other European countries.

Europe must solve the refugee crisis with "fairness and solidarity", Merkel added. She emphasized that Germany was ready to take on more asylum seekers than other EU countries, given its size and strong economy.

The EU has been arguing about refugee distribution quotas for months. Many European countries, including Great Britain, Hungary, Poland and several other states from the former Communist block have refused mandatory quotas.

Donald Tusk, President of the European Council, said on Thursday that at least 100,000 refugees should be redistributed "fairly" among the member states.

Refugees in Budapest hoping for trains to Germany

Police in Hungary are once again letting refugees board trains at the station in Budapest. But the trains heading out of the country are making unplanned stops before reaching the border. Max Hofmann reports. (03.09.2015)