Five people have been injured in a fire in a migrant shelter in Heppenheim near Frankfurt. Police are investigating whether this may be the latest in a series of arson attacks on refugee homes across Germany. 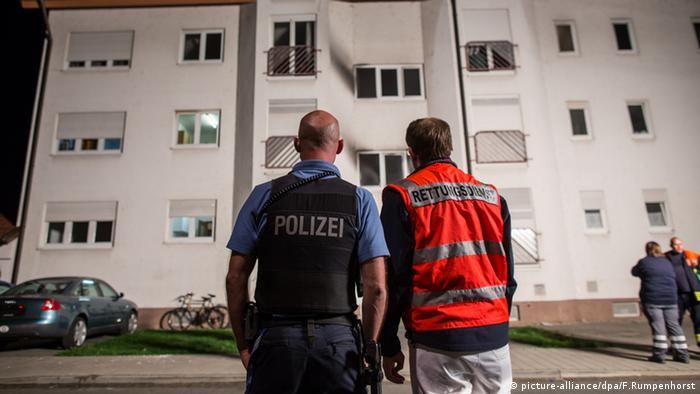 German police on Friday confirmed that five people have been injured in a blaze at Heppenheim in the western state of Hesse.

"One resident who tried to rescue himself by jumping out of a window from the second floor was seriously wounded," police spokeswoman Christiane Kobus told journalists. Four other people were poisoned by the fumes.

Eye witnesses reported smoke coming out of the building at around 0130 hours CET (0030 hours UTC). Firefighters arrived soon after, accompanied by emergency doctors and ambulances.

Initial examinations revealed that the fire had broken out behind the entrance door, but it was too early to say whether it was a case of arson. An official investigation has been ordered into the incident.

More than 60 refugees from Syria, Iraq, Ethiopia, Eritrea, Iraq, Algeria and Somalia among others were accommodated in the shelter, which lies 60 kilometers south of Frankfurt.

The building is now uninhabitable and authorities are looking for another suitable place to accommodate the migrants, officials said.

Germany is witnessing an unprecedented influx of hundreds of thousands of migrants, many of whom are fleeing conflict and poverty in Africa and the Middle East.

A fire has broken out at a sports hall in northern Berlin. Contrary to earlier media reports, the gym was not a planned refugee camp, although it remains unclear whether the blaze was the result of an arson attack. (26.08.2015)

A refugee home has caught fire in Germany, raising concerns over anti-migrant attacks. Meanwhile Chancellor Merkel faces tough questions during her visit to a problematic immigrant neighborhood in the country's west. (25.08.2015)