A refugee home has caught fire in Germany, raising concerns over anti-migrant attacks. Meanwhile Chancellor Merkel faces tough questions during her visit to a problematic immigrant neighborhood in the country's west. 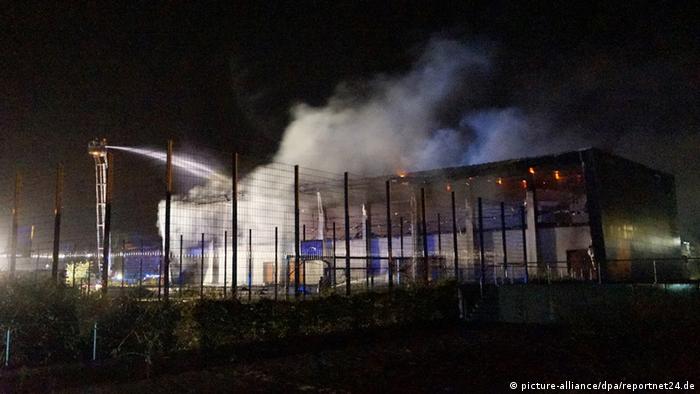 Right-wing violence and perceived problems due to immigration are expected to be the main themes of Merkel's meeting with citizens in Duisburg, which comes in the wake of several attacks on refugee shelters.

On Tuesday, a school sports hall converted into an emergency refugee shelter caught fire in the eastern town of Nauen. The hall had been redesigned to house around 130 asylum seekers, who were awaiting transfer to permanent housing locations.

Police in nearby Potsdam said that the fire spread soon after it was discovered, leading them to believe the incident may have been planned. There were however no hints of any right-wing extremist activity as yet, and there was also a high possibility of a technical fault. No one was injured in the blaze.

Little pockets of fire around the building prevented any police investigations, but officials said they would be looking for clues immediately after firefighters had declared the site to be safe.

Residents of Nauen had recently taken to demonstrating against the migrants' homes in their town. Police also confirmed that neo-Nazis had participated in rallies protesting refugee homes in their city.

The fire in Nauen is the most recent in a series of attacks on refugee homes in Germany. A similar fire took place at an asylum home in southwestern Germany in the early hours of Monday morning, with its cause also unknown as yet.

The most notorious such incident took place in the eastern city of Heidenau, where police clashed with anti-migrant protestors protesting in front of a refugee home in the last days. Several police officers were injured in the incident.

Condemning the violence, Merkel said it was "repulsive, the way in which right-wing extremists and Neo Nazis were trying to spread their hollow messages." She would visit Heidenau on Wednesday and speak to refugees, helpers and security officials about the situation, her spokesman Steffen Seibert told journalists.

In the wake of these incidents, Chancellor Merkel was expected to face some tough questions during her visit to a so-called "No-go area" called Marxloh in the western city of Duisburg. She was to speak with representatives of the church, mosques and members of the local business and academic community.

Marxloh, considered one of the most impoverished neighborhoods in all of Germany, has a very high crime rate. More than 16 percent of its population is unemployed. Of the 19,000 residents, more than 50 percent are of foreign origin. Last week, members of an Arabic group clashed with police, who have repeatedly warned of Marxloh being a "lawless" place, with criminal family gangs and rocker bands dominating the area.

Chancellor Angela Merkel has condemned violent protests outside of a shelter for asylum seekers in a town in the east of Germany. Merkel had been criticized by some for not coming out against the far-right earlier. (24.08.2015)

German politicians have voiced outrage after a second night of protests against a refugee home in the eastern town of Heidenau. A police union accuses lawmakers of lacking ideas for coping with a growing refugee crisis. (23.08.2015)

Coronavirus: Russia rolls out COVID vaccination in Moscow 3h ago