Celebrating Eid during the Syrian truce | News and current affairs from Germany and around the world | DW | 13.09.2016

Celebrating Eid during the Syrian truce 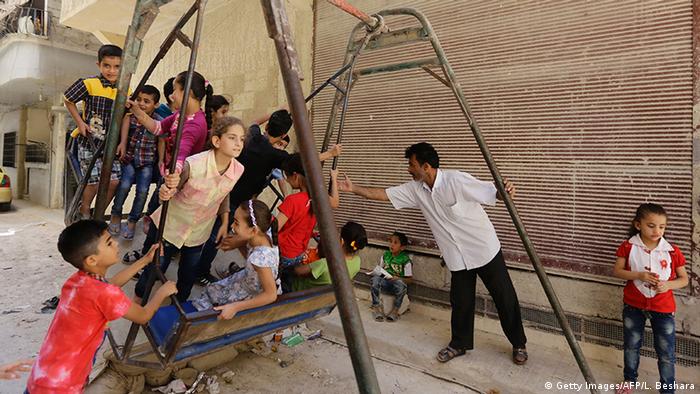 The Eid al-Adha tale has significance to Islam, Christianity and Judaism. Eid al-Adha is an Islamic festival to observe the readiness of Ibrahim (also known as Abraham) to follow Allah's (God's) command to sacrifice his son Ishmael. As a result it has become a metaphor for sacrifice in many cultures and is especially relevant in the context of modern-day Syria.

This year, global players took to social media yet again to lend their well wishes to the Muslim world. Amongst them were British Prime Minister Theresa May and Russian President Vladimir Putin:

But as the rest of the world celebrated Islam's holiest festival, how was Eid al-Adha commemorated in war-torn Syria?

Aleppo-based Journalist Ahmad Alkhatib tweeted this photo of children playing with a bomb in the Al Muyaser neighborhood in the city.

The UN office that coordinates humanitarian aid shared this photo wishing all Syrians a happy Eid:

The French humanitarian organization the Ummah Charity says it is now distributing food to people in Aleppo.

Aleppo is Syria's largest city and was shelled by Syrian government forces over the weekend. Over the last four years it has been divided into an opposition-controlled east and a regime-held west.

He joined Eid al-Adha prayers at a Mosque in the suburb. Daraya was recaptured by government forces last month.