Nearly a third of coral in the Great Barrier Reef died during a nine-month period in 2016. The die-off was caused by high sea temperatures. 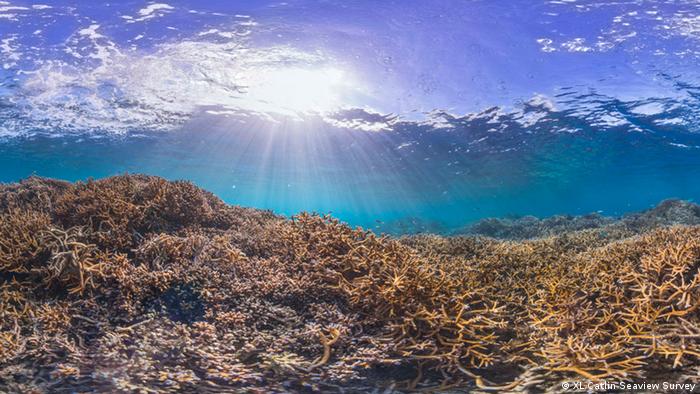 Australia's Great Barrier Reef suffered a "catastrophic die-off" following an extended heatwave in 2016, according to a study published on Thursday.

Nearly one-third of coral in the 2,300-kilometer-long (1,430-mile) reef system died between March and November 2016, the study published in the journal Nature found.

The Great Barrier Reef is unlikely to recover. The scientists involved in the study warned the findings signal the large-scale collapse of reef ecosystems as a result of global warming. Reefs cover one percent of the world's oceans, but are home to some 25 percent of marine life and act as fish nurseries.

Fast growing branching coral species with shapes that provide habitat and protection to fish and other marine life faired poorly under heat stress. Although slower growing coral species that are smooth and melon-shaped tended to survive, they, however, do not provide significant habitat for marine life.

"The coral die-off has caused radical changes in the mix of coral species on hundreds of individual reefs, where mature and diverse reef communities are being transformed into more degraded systems, with just a few tough species remaining," said study co-author  Andrew Baird, a professor at James Cook University.

The scientists said the results of the findings should focus attention on limiting global warming to not more than 2 degrees Celsius (3.6 degrees Fahrenheit) above pre-industrial levels and protecting remaining coral systems.

"The Great Barrier Reef is certainly threatened by climate change, but it is not doomed if we deal very quickly with greenhouse gas emissions. Our study shows that coral reefs are already shifting radically in response to unprecedented heatwaves," said Terry Hughes, the director of the ARC Centre of Excellence for Coral Reef Studies.

There are still "a billion or so corals alive, and on average, they are tougher than the ones that died. We need to focus urgently on protecting the glass that's still half full, by helping these survivors to recover," he added.

Acutely aware of how global warming is damaging the planet, coral reef scientist Kim Cobb has responded to recent political developments and changes in climate policy by trying to cut her own carbon footprint. (05.03.2018)