Spain's Supreme Court has ruled Oriol Junqueras will continue to be held in prison, after more than two months behind bars. The decision means he will probably not be able to be sworn into the new Catalan parliament. 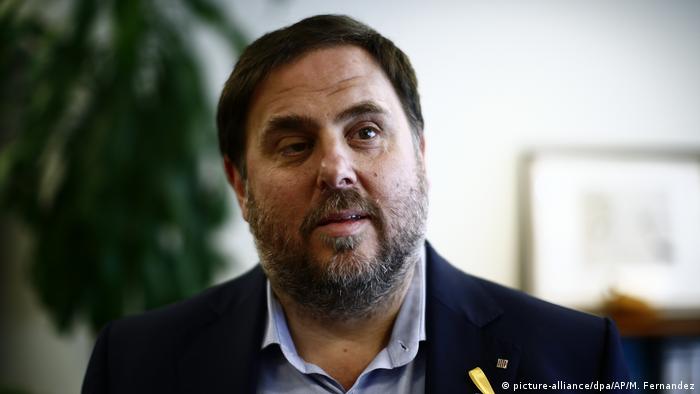 In a written ruling, the judges said there was a risk that Junqueras would again commit an offense if he were released as there was no evidence to show he had abandoned "the path followed so far."

Read more: Opinion: Spain and Catalonia have a communication problem

The separatist leader has already been held in prison for more than two months on allegations of rebellion, sedition, and misuse of public funds, following an illegal referendum on secession from Spain on October 1.

The court's decision will likely prevent Junqueras from being sworn in at the opening session of the new Catalan parliament on January 17 and complicates the separatist parties' search for a leader who is neither jailed or abroad.

The December 21 election saw the separatists gain a slim majority, in a vote that Spanish Prime Minister Mariano Rajoy had hoped would quash the Catalan independence movement.

Market-friendly unionist party Ciudadanos (Citizens) won the most seats but other unionist parties did not secure enough votes to form a majority.

Puigdemont remains in self-imposed exile in Brussels, though he has said he would return to Catalonia if the Spanish government gave him certain "guarantees," likely a promise not to arrest him.

Rajoy fired both Junqueras and Puigdemont and four other cabinet members when he imposed direct control over Catalonia, after its separatist-controlled government declared independence following the October 1 referendum.

While around 90 percent of participants voted for independence, the voter turnout was only 43 percent. In the Catalan parliamentary vote, which passed 70 to 10, dozens of opposition lawmakers walked out, boycotting the vote.

After the Supreme Court's ruling, Puigdemont tweeted: "There is a conflict between Catalonia and Spain that must be resolved. We have always opted for peace and dialogue."

Those in jail or on the run have the option of ceding their seats to others in their parties to ensure they keep a majority when parliament restarts on January 17.

Republicn Left and Together for Catalonia, along with a smaller separatist party, have not yet agreed on a coalition.

Catalan citizens will head to the polls this Thursday to elect a new government. The vote will pit pro-independence and pro-unity parties against one another. Neither camp looks set to win a clear majority. (19.12.2017)

Catalonians woke up on Saturday morning with Mariano Rajoy as their regional president. Madrid voted to fire the Catalan parliament after it illegally declared independence. (28.10.2017)