A coalition of secessionist parties has won an absolute majority in the Catalan regional parliament. The single party with the most seats, however, was the pro-Madrid Citizens party.

Ousted regional President Carles Puigdemont is set to regain power in Catalonia after his Together for Catalonia (Junts per Catalonia) party captured 34 seats in Thursday's election. Together with the 36 seats of the two other pro-independence parties, the separatists are headed for an absolute majority in the 135-seat regional parliament.

Puigdemont's bloc had fared slightly better in the last regional elections in 2015, however, when the pro-independence parties earned 72 seats.

The secessionist parties garnered only 48 percent of the popular vote. The pro-Madrid Citizens party won the most seats outright with 37, but will not be able to form as substantial a coalition as the secessionists.

Speaking from exile in Brussels, Puigdemont called the election a victory for the "Catalan Republic" as well as a "slap in the face" to Spanish Prime Minister Mariano Rajoy.

"I think we have earned the right to be listened to," he added. 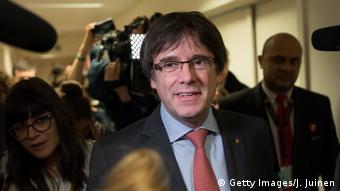 Citizens' leader Ines Arrimadas said the result shows that "the majority of Catalans feels Catalan, Spanish and European," and vowed to fight the pro-independence parties in the region.

Catalan National Assembly Vice President Agusti Alcoberro claimed victory on behalf of the separatists, declaring in front of a crowd in Barcelona that "pro-independence forces have won the elections."

Alcoberro then demanded the release of imprisoned secessionist politicians and "the restitution of the government," sacked by Madrid.

The regional election was largely seen as a mandate on the highly autonomous Spanish region's push for independence from Spain. Lead-up polling had favored two contenders, the ERC on the pro-independence side and Citizens on the pro-union side, in a tight race for the largest share of seats.

The pro-independence forces garnering an absolute majority could be a significant blow to the government of  Prime Minister  Rajoy, who had hoped the election would put an end to the drive to secede. It will also do little to end the political deadlock, with a minority of voting Catalans supporting secession but a pro-secessionist government taking the regional reigns of government.

The vote on Thursday had been ordered by Rajoy in the aftermath of a highly contested independence referendum on October 1 and a subsequent unilateral declaration of independence, both of which were ruled unconstitutional. The central government in Madrid also sacked Puigdemont's regional government and took direct control of the region.

During his victory speech from Brussels on Friday, Puigemont offered to meet with Rajoy outside of Spain to discuss Catalonia's independence crisis, adding that it was time to repair the damage done by Madrid's decision to take direct control of the region.

The Catalan leader also said that he was willing to return to Barcelona provided he was guaranteed to be able to take his position as the head of the new regional government.

Where does the EU stand when it comes to Catalonia's independence? Bernd Riegert from Brussels

What are the main parties?

The main political parties in favor of seceding from Spain are:

The main political parties in favor of unity with Spain:

The anti-austerity Catalonia in Common (Catalunya En Comu-Podem) party, an alliance that has suffered internal divisions, could be a wildcard in a possible future regional coalition.

Turnout for Thursday's vote hit a record high, with many Catalans streaming from work to the polling stations in the final hours of voting. The regional government election results showed that just under 82 percent of eligible voters, some 3.7 million people, had cast their ballots — 7 percent more than the record turnout in 2015, when some 75 percent of the electorate cast a ballot.

The campaign for the snap election mobilized both independence and union supporters.

In the days prior to the vote, Societat Civil Catalana, one of the largest pro-union civil organizations, tweeted that young Catalans were losing work opportunities due to the push for independence. "Our future is in your hands this 21-D," it wrote, referring to the election date. "Will you help us?"

Catalonia, one of Spain's wealthiest regions, has suffered economically since the referendum and following uncertainty.

Germany was the first EU ally to weigh in on the Catalan vote on Friday, saying that the region's future remained a Spanish domestic issue that "has to be resolved within Spanish law and the Spanish constitutional order."

During a government news conference in Berlin, spokeswoman Ulrike Demmer told reporters: "We hope that the current division in Catalan society can be overcome and that a common future can be found with all political forces in Spain."

Catalan citizens will head to the polls this Thursday to elect a new government. The vote will pit pro-independence and pro-unity parties against one another. Neither camp looks set to win a clear majority. (19.12.2017)

Spain has dropped its international arrest warrant for Catalonia's deposed leader, but he will remain in Belgium. Pro-independence activists have organized a rally in Brussels to draw Europe into its independence fight. (06.12.2017)