Campaigning starts in Catalonia with leaders jailed, in exile 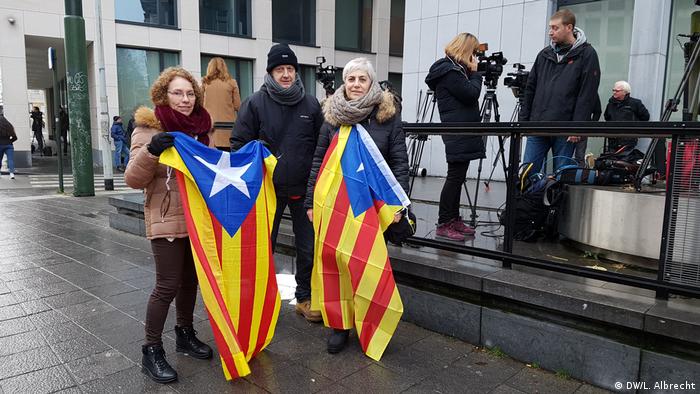 Catalonia kicked off campaigning for regional elections on Tuesday as many pro-independence candidates sat in jail or in exile. Polls have the separatists and pro-Madrid parties neck and neck ahead of the December 21 vote.

"They [Madrid] want to raise as many difficulties as possible so we can't campaign on an equal footing with the other candidates," said Catalan leader Carles Puigdemont in a video message to supporters.

From his haven in Belgium, Puigdemont said Catalans must "choose between nation or submission, they can choose between Catalan institutions or dark characters in Madrid."

Puigdemont's former deputy Oriol Junqueras and three other independence leaders had their request to be released on bail pending trial rejected by a Spanish Supreme Court judge on Monday.

The central government wants Puigdemont and his associates imprisoned for rebellion — a charge that can carry up to 30 years in prison. Spanish prosecutors are currently fighting to have Puigdemont extradited back to Spain to face trial.

Puigdemont calls for secession from EU

Catalonia's political crisis kicked off in October, when Puigdemont declared Catalan independence from Spain after a disputed referendum. A vast majority voted for independence, but turnout was poor, with opponents of secession staying home. Madrid promptly sacked Barcelona's government and called for the new vote in December.

Puigdemont has been in exile in Brussels since October 30, and has since called for Catalonia to secede not only from Spain but from the European Union over alleged rights violations that occurred during the independence vote — such as the forced closure of polling stations by police.

Current polls predict that pro-independence parties should receive 66 or 67 seats in Barcelona's parliament, just one short of an absolute majority. The three parties that oppose independence can expect 59 or 60 seats, polls suggest.

The deposed Catalan parliament speaker and five lawmakers have been called by Spain's Supreme Court to answer charges of rebellion, sedition and embezzlement. Spain is cracking down hard on separatist leaders. (09.11.2017)

The Spanish Prime Minister Mariano Rajoy called on Catalans to vote in huge numbers in a December election to "restore normalcy." Rajoy was in Barcelona on his first visit since Madrid imposed direct rule on Catalonia. (12.11.2017)