The deposed Catalan parliament speaker and five lawmakers have been called by Spain's Supreme Court to answer charges of rebellion, sedition and embezzlement. Spain is cracking down hard on separatist leaders. 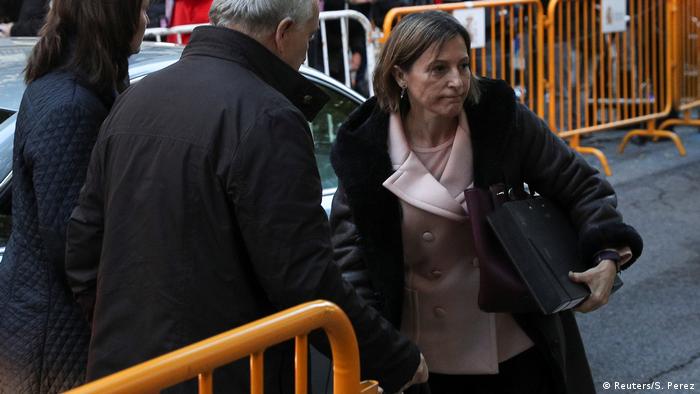 Catalonia's former president of the chamber Carme Forcadell and five lawmakers stand accused of a "concerted strategy to declare independence" in violation of the constitution. The six are accused of rebellion, sedition and misappropriation of public funds.

Forcadell was the first of the six to testify at the Supreme Court on Thursday. Former vice presidents Lluis Corominas, Lluis Guino and Anna Simo, as well as former secretaries Ramona Barrufet and Joan Josep Nuet were to follow. By Thursday afternoon, four of the lawmakers had finished answering questions, according to a court spokeswoman while the remaining two were to be questioned later in the day.

The Supreme Court last week allowed the case for the six to be postponed until Thursday to allow time to prepare for the hearing. The charges the parliamentarians face are the same as those for which eight deposed Catalan ministers are currently being held in jail awaiting trial.

The Supreme Court also said on Thursday it had decided to take over cases relating to the banned
Catalan independence referendum from the Catalan High Court, according to Reuters.

Eight ministers were sent to prison without bail last week while awaiting their trial after their hearing at Spain's National Court for their role in the October independence referendum. That court had not allowed a postponement and continued the hearings despite the short notice.

The Constitutional Court on Wednesday declared void the Catalan parliament's declaration of independence.

Deposed Catalan President Carles Puigdemont and four of his former ministers have remained in Belgium, where they went after the Spanish government last week took over powers from Catalonia's regional government and called an election for December 21.

A Belgian judge is now reviewing a Spanish extradition request for the five Catalan politicians.

The Catalonia independence drive has plunged Spain into a deep political crisis and threatened stability in the EU's fifth largest economy.

The independence referendum passed by a wide margin, but the vote split Catalans. Turnout was only 43 percent and Spain's top court ruled it illegal.

New elections in Catalonia will be held next month and Prime Minister Mariano Rajoy on Wednesday urged "massive participation" in the vote. A high turnout could deal a blow to separatist parties.

In a sign of cracks in the pro-independence camp, Puigdemont's Democratic Catalan Party and its separatist allies have failed to unite around a leading candidate for the December vote.

Puigdemont was selected by his party last week to head its ticket, even if he has to run the campaign from Belgium.

Separatist parties won a slight majority of seats in the Catalan parliament in 2015, but they received fewer than half the votes.

The Catalan parliament declared independence from Spain on October 27 after a month-long standoff with Madrid. Within the hour, the Spanish Senate had ordered the central government to impose direct rule on the region. (27.10.2017)