Catalonia's ex-president Carles Puigdemont and four former cabinet members have been released pending a court ruling on a Spanish extradition request. The extradition process could last up to two months. 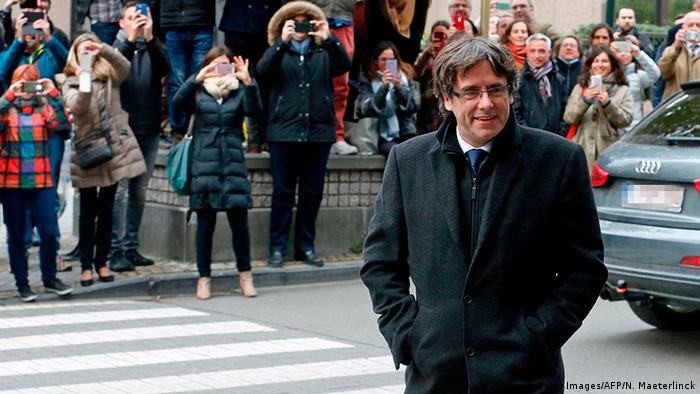 Sacked Catalan leader Carles Puigdemont and four other former ministers were conditionally released after they turned themselves in to Belgian police earlier on Sunday, prosecutors said.

An investigative judge approved their release pending a court ruling on a Spanish request for extradition after Madrid issued a European arrest warrant earlier this week.

The extradition process could last up to two months.

Spanish prosecutors filed charges against Puigdemont and the other former regional leaders of Catalonia for their role in last month's independence referendum, which the Spanish government has called illegal — a position that was backed by an independent court ruling.

Read more: What's next for Puigdemont?

Hours after Puigdemont turned himself in, he was nominated by his party as its candidate for a December 21 regional election in Catalonia that was called after Madrid seized the region's powers. That means Puigdemont could run the election campaign from Belgium as the extradition process proceeds.

Catalan pro-independence parties ERC, PDECat and CUP could win 66 to 69 seats between them in Catalonia's parliament in the December vote, thus gaining more votes than other viable blocs but possibly falling just short of an absolute majority, according an opinion poll published in La Vanguardia on Sunday.

An absolute majority in the parliament would be 68 seats.

The coalition would need a majority to revive the secession campaign that has tipped Spain into its worst political crisis of the past few decades.

The La Vanguardia poll, carried out from October 30 to November 3 with 1,233 respondents, showed the conservative Popular Party of Spanish Prime Minister Mariano Rajoy, the centrist Ciudadanos and Catalonia's Socialist Party together winning 44 percent. It predicted the remaining 10 percent would go to Catalunya en Comu, which opposes independence but supports holding a legal referendum on the issue.

Rajoy imposed direct rule on Catalonia from Madrid and called the December 21 election after the autonomous region's majority separatist parliament declared independence last month following a referendum that was classed as illegal by Madrid and registered a turnout of just 43 percent.

Puigdemont and four ex-ministers are facing charges of rebellion, sedition, misuse of public funds, disobedience and breach of trust.

On Thursday, nine members of his sacked cabinet were ordered to be held on remand by Spain's High Court pending an investigation and potential trial.

What has happened so far:

- On October 28, Madrid exercised constitutional powers allowing it to take over the running of Catalonia. Spanish Prime Minister Mariano Rajoy dismissed the Catalan cabinet and dissolved the regional parliament

- Spanish prosecutors filed rebellion charges against Catalan leaders on October 30, as Puigdemont traveled to Brussels with several ex-cabinet ministers, saying he was seeking "freedom and safety"

A Spanish judge has ordered the arrest of deposed Catalan leader Carles Puigdemont and four members of his cabinet. The five are facing charges of rebellion for their part in Catalonia's independence campaign. (03.11.2017)