More than 40,000 people have rallied in the northern Spanish city of Bilbao in anger at Spain's direct rule of Catalonia. The Basque Country region has its own separatist movement, which for decades turned bloody. 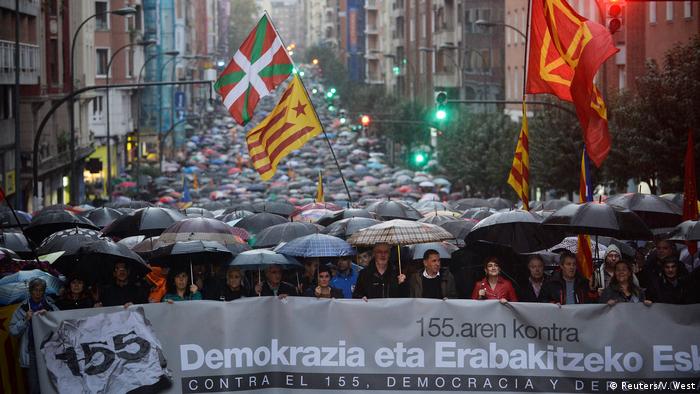 Protests against Madrid's handling of the Catalan crisis spread to another Spanish region on Saturday, as the streets of the northern city of Bilbao in the Basque Country were awash with protesters waving umbrellas.

According to the regional paper Naiz, some 44,000 people took part in the rally, which was called by several Basque Country pro-independence groups, the ultraleft party Podemos' regional branch and several labor unions.

Read more:Catalonia: 'Rajoy will not make concessions to anyone'

The Basque region has, until recently, seen decades of violence by the paramilitary group ETA which left some 850 people dead. ETA surrendered its weapons earlier this year, effectively ending its campaign of terror, after the region won financial concessions from Madrid.

The organizers of Saturday's rally said they were angry at how the Madrid government had imposed direct rule on Catalonia, an autonomous region in Spain's northeast, following an independence referendum.

Some protesters carried a banner that read "No to 155. Democracy and right to decide," in reference to Article 155 of Spain's constitution, which Madrid triggered a week ago to suspend Catalonia's regional autonomy. Spain also called a snap election for the region next month.

Weeks after Catalan President Carles Puigdemont held a referendum on self-rule, which was declared illegal by the Spanish courts, he has become the target of a European Arrest Warrant after fleeing to Belgium with four of his ministers.

Nine other Catalan cabinet members have been remanded in custody, charged with rebellion and other alleged crimes, after Madrid authorities removed the entire regional government from office.

On Saturday, authorities in Belgium said they would consider whether Puigdemont could be extradited to Spain to face trial.

Speaking to the media during the Bilbao protest, Arnaldo Otegi, leader of Basque pro-independence party EH Bildu and a former jailed ETA member, decried the recent events in Catalonia.

"In the face of this situation, it's necessary that the Basques take to the streets, as we're doing today, and build a popular, democratic wall that allows us to confront this situation," he said.

Puigdemont has urged all pro-independence political parties in Catalonia to join a coalition for the region's December 21 election.

The president has said he would consider running in the election, even if he has to campaign for his center-right separatist Catalan European Democratic Party from afar.