Spain has dropped its international arrest warrant for Catalonia's deposed leader, but he will remain in Belgium. Pro-independence activists have organized a rally in Brussels to draw Europe into its independence fight. 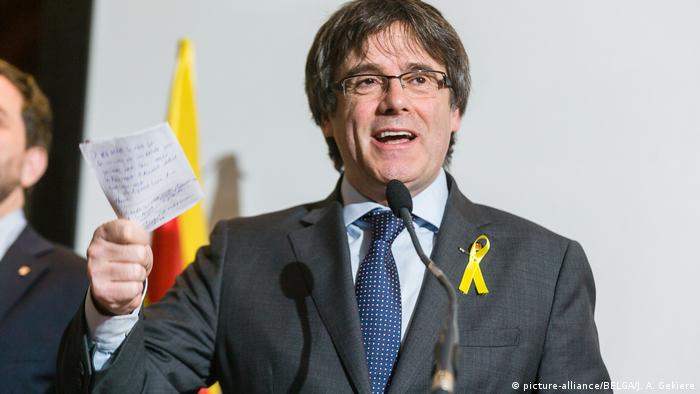 Spain dropped its international arrest warrant for Puigdemont on Monday to avoid a lengthy extradition trial, saying it appeared that he and his former ministers were likely to return to Spain to contest the upcoming election in Catalonia.

Puigdemont told reporters he hoped to return to Spain if elected to Catalonia's parliament, but said he was unsure if he would be arrested.

"We have to carefully consider such a decision before taking it," Puigdemont said at a press conference in Brussels. "For the moment we will stay here."

Puigdemont and four ex-cabinet members fled to Brussels shortly after they were sacked by the central government for calling an illegal referendum in October and declaring independence. They are due to face charges of rebellion, sedition and misappropriation of funds.

Puigdemont claimed on Wednesday that Spain dropped the international warrant for fear of losing the extradition case.

"The Spanish state became scared of losing. This shows that we are facing a political cause and that the European warrant was a political fudge from the beginning," Puigdemont said.

Pro-independence activists have called a rally in Brussels for Thursday to call for Europe's involvement in the issue.

The wife of jailed separatist activist Jordi Cuixart, who heads Omnium Cultural, told DW in Brussels that they were hoping for the support of European institutions.

Her husband Cuixart has been held since October on charges of sedition after his Omnium Cultural group allegedly urged supporters to take part in protests that hindered police in the run up to the referendum.

Bonet told DW they had a young child and that she had to travel hundreds of kilometers to visit him.

On Tuesday Omnium Cultural said in a statement that it considered "arbitrary and unfair" the decision by the Spanish Supreme Court judge to keep in Cuixart in custody along with three other jailed separatists, while freeing six Catalan politicians on bails of €100,000 ($118,000).

Organizers of Thursday's "Europe, Wake up!" have reportedly organized charter planes and busses to transport Catalans to the Belgian capital.