Catalan President Carles Puigdemont has said Catalonia should declare independence, but only after talks with Spain. Madrid has fired back, saying the "tacit" declaration was "unacceptable." 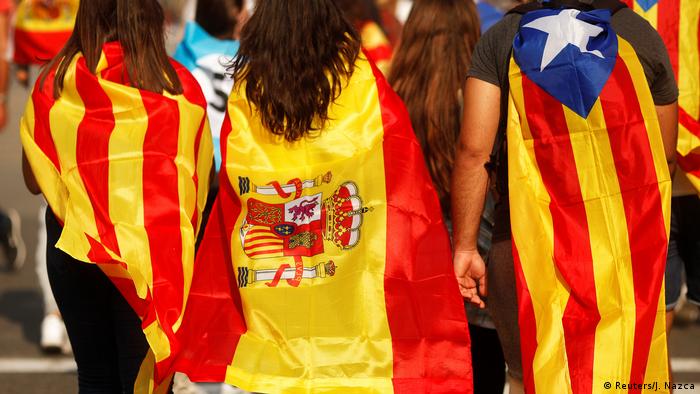 The Spanish government rejected what it called a "tacit" declaration of independence by Catalonia on Tuesday evening after Catalan President Carles Puigdemont said the region had won a mandate to declare its independence from Spain, but would first seek talks with Madrid.

"It's unacceptable to make a tacit declaration of independence to then suspend it in an explicit manner," a central government spokesperson told reporters in Madrid.

Officials in Madrid have repeatedly accused Catalan leaders of disregarding the constitution in their drive for independence.

Puigdemont calls for dialogue with Spain

The leader of opposition party Ciudadanos in the Catalan parliament, Ines Arrimadas, said the president's claim to have a mandate amounted to a power grab.

"This is a coup. Nobody has recognized the result of the referendum. Nobody in Europe supports what you have just done," she said.

The leader of the Catalan socialist party, Miquel Iceta, also criticized the legitimacy of the referendum result. "You can't claim a mandate from the October 1 vote," he said, adding it was "a vote that had no guarantees."

Barcelona Mayor Ada Colau was more positive and thanked Puigdemont on Twitter for "opting for dialogue and mediation." She said it was now up to Spanish Prime Minister Mariano Rajoy and Spain's other political parties to respond to the offer.

Colau had warned the Catalan president against a unilateral declaration of independence earlier on Tuesday and called on both sides to enter negotiations to settle the dispute.