Captured Russian whales and orcas to be freed from 'whale jail'

Dozens of beluga whales and orcas are being held in icy waters in Russia after they were captured by a fishery. The so-called "whale jail" has been condemned by activists and Russia has promised to free the animals. 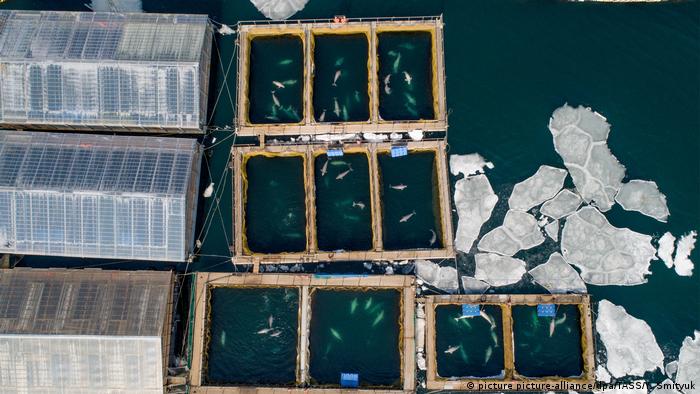 Almost 100 captured beluga whales and orcas are languishing at a coastal fishery in far-east Russia, which allegedly sought to sell the animals to Chinese aquariums, activists said.

The facility — found to be in possession of 87 whales and 11 orcas — is due to be emptied as soon as weather conditions are warm enough for the animals to be transported, Gordeyev said.

They will then be taken to a center that specializes in caring for large marine wildlife at Russky Island near the far-eastern city of Vladivostok.

But for now, the fate of the animals remains unclear, as they continue to sit in icy waters in small rectangular pens in what has been labelled a "whale jail." "Expertise showed that the animals were kept in unsatisfactory conditions, and must be released into their natural habitat," the TASS news agency cited the FSB as saying.

The FSB said it had been instructed to empty the facility after uncovering the 98 sea creatures, according to a statement carried by Russian news wires. 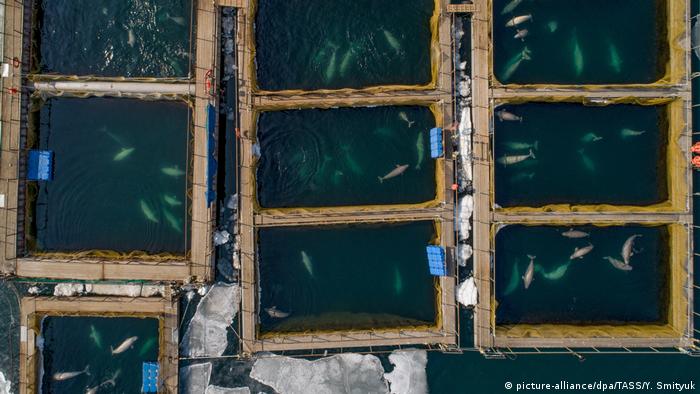 Dmitry Lisitysn, head of Russian NGO Sakhalin Environment Watch, was invited by authorities to visit the facility on January 18 and 19 to assess the animals' health, National Geographic reported.

Lisitsyn told National Geographic that among the captured whales were 15 beluga babies who likely had not been weaned off their mothers' milk when they were taken and that all of the beluga whales appeared to be in distress.

Lisitsyn said there were orcas with lesions around their dorsal fins, which could be from frostbite, or a fungal or bacterial infection from the stagnant water.

The so-called "whale jail" has caught the attention of celebrities including Pamela Anderson and Leonardo DiCaprio, who encouraged his Twitter followers to sign a Change.org petition calling for the whales to be freed.

According to the Change.org petition, there are currently 11 orcas, 5 baby walrus and 90 baby belugas held in these enclosures, and 15 of the belugas are yearlings that need their mothers for survival.

The petition for the whales has received more than 900,000 signatures.

Hardly anywhere else on Earth is as good for whale watching as the Canary Islands in the Atlantic. DW reporter Christina Deicke went on board to get a glimpse of these marine giants in their natural habitat. (04.01.2019)