Can Japan compete with China over development aid?

Japan is rethinking the ways in which its official development assistance is provided to developing nations in order to promote its vision for a "free and open Indo-Pacific strategy." Julian Ryall reports from Tokyo. 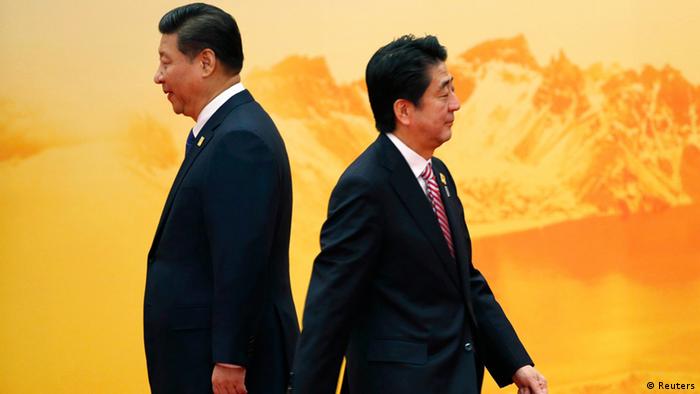 Japan's net official development assistance (ODA) comes to around $10.4 billion (€8.5 billion) a year, representing 0.2 percent of gross national income and making Japan the fourth largest donor nation in the world and the largest in Asia.

Yet, Tokyo finds itself in competition with China, which has deeper pockets and fewer scruples about the governments that it chooses to support.

The Japanese government's decision to rethink its ODA policies is clearly in response to China's aggressive use of its economic might in the Asia-Pacific region, with Beijing providing vast sums to developing nations and announcing vast development plans, such as the "Belt and Road Initiative (BRI)." First outlined by Chinese President Xi Jinping, BRI puts China at the center of a growing network of transportation and trade links that will ultimately stretch to encompass more than 60 nations.

Concerned at Beijing's growing economic and political influence in the Asia-Pacific region and beyond, Japan has forged new links with the United States, Australia and India – an informal grouping referred to as the Quadrilateral Security Dialogue – in order to provide a counterweight to China.

And there are many who say the pushback against Chinese efforts to exert more and more pressure over smaller countries is not a moment too soon.

Japan aims to win new allies in Africa with aid

"In comparison with Japan and the ODA budgets of other countries, Beijing clearly uses its aid budget for its own narrow strategic objectives," said Yoichi Shimada, a professor of international relations at Fukui Prefectural University.

"Japan has traditionally believed its aid should be spent on programs that help people in less-developed parts of the world to improve their standards of living," he told DW.

In contrast, Shimada claims, Beijing's foreign aid has one objective – to create jobs for Chinese corporations and to advance its own "narrow global ambitions." He points out that China does not release statistics on the foreign aid that it provides as the figures are considered state secrets. Estimates suggest that China disbursed $354.3 billion in the 15 years up to 2014, which comes close to rivalling the $394.6 billion the US provided in the same time period.

The data suggests that China actually spends more on ODA than the US on an annual basis, while it is estimated that Beijing is financially supporting more than 4,300 projects in 140 countries around the world.

Shimada points out that the three largest recipients of Chinese assistance in the 15 years to 2014 were Pakistan, Russia and Angola. It is no coincidence, he stresses, that China is very keen to obtain natural resources from Russia's Far East region, that Angola has large amounts of natural resources and acts as a foothold onto the entire African continent, and that Pakistan is a fierce rival of India, with which Beijing is also locked in a dispute over territories along their frontier.

And Beijing is not above exploiting a recipient nation's situation, he claimed.

"Sri Lanka took out loans from Beijing but was not able to pay them back within the time frame, so China has taken out a 99-year lease on a strategic port in Sri Lanka as repayment, turning the island into one of its strategic bases in the region – what Beijing calls its 'string of pearls' policy," Shimada said.

Jeff Kingston, director of Asian Studies at the Japan campus of Temple University, agrees that China is using its economic strength to Japan's disadvantage and that it is "trying to woo support in countries where Japan has previously had a long-standing relationship."

Myanmar is one example of a nation where Tokyo has long supported infrastructure, health and development projects, said Kingston, although it has been harder to extend unequivocal support for the regime since news about atrocities against the Rohingya minority started to come to light.

"For Japan, that makes providing aid to the regime very delicate," he said. "China, on the other hand, simply does not care about human rights issues and has stepped in."

It is a similar story in a number of other nations in Southeast Asia, he points out, including Laos, Cambodia, Thailand and Indonesia.

"This money is not strictly 'aid,' but the recipient nation does not care what it is called," Kingston said. "And we are also seeing Chinese companies bidding for projects in Africa at a very low cost and essentially making a loss because it helps to keep Chinese companies in business at the same time as increasing China's profile and presence in a nation."

Kingston says both Japan and China can be considered to have "ulterior motives" in the ways in which they use their ODA budgets, although there are some stark differences.

"Japan still has principles on how development money is spent, and if it helps Japanese companies win contracts, it's a bonus," he said. "China, on the other hand, seems to care less about doing good in a recipient country and is primarily motivated by promoting domestic companies' operations abroad and Beijing's strategic interests."

"Frankly speaking, our power is quite limited, so Japan should focus its efforts on assisting countries in the Asia-Pacific region," he said. "But we should immediately stop providing ODA to countries that have any sort of trade with North Korea and those that are siding with China in the region."