Berlin is getting a monument to the peaceful revolution of 1989-90. It comes after years of contentious squabbling. And residents of the German capital aren't exactly thrilled about the new attraction. 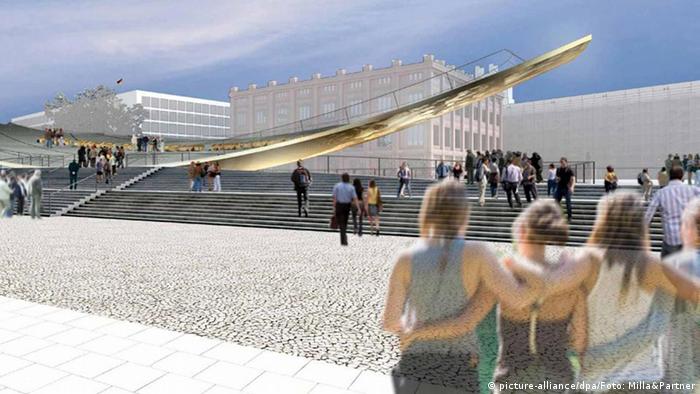 After nearly a decade of discussion, the German parliament on Friday gave the final go-ahead for a monument commemorating German reunification in 1989-90. In a parliamentary session that went on until the wee hours of the morning, a large majority of deputies in the Bundestag approved the structure, named Bürger in Bewegung (Citizens in Motion).

"This monument to freedom and unity cannot and will not fail because of financing," said Marco Wanderwitz of Chancellor Angela Merkel's conservative Christian Democrats. "We intend to start building it."

The monument, designed by Stuttgart architects Milla & Partners, will take the form of a gigantic see-saw that will move depending on how many people stand where atop it. It will be built in front of the reconstruction of the Stadtschloss (City Palace) in the former center of East Berlin and pay tribute to the East German protestors who brought about the fall of the Berlin Wall in 1989 and the reunification of Germany one year later.

Read: The dark side of German reunification

The monument's inscription will read "We are the people. We are one people" - two slogans from 1989-90.

But a feisty exchange in the final Bundestag debate about the project underscored the fact that Germans from the west and the east still often don't see eye to eye. The conservatives, Social Democrats and Greens voted for the monument while the Left Party, which draws most of its voters from the former communist East, opposed it.

"We in the Left have never come out in principle against a memorial to the peaceful revolution of 1989-90," said Left Party Cultural Spokeswoman Sigrid Hupach. "But we have criticized the specific location, the lack of participation of the people and the overall procedures."

Hupach was repeatedly interrupted by conservatives shouting "You were never happy about reunification" and "You never wanted German unity!" It was a fittingly contentious latest chapter in a project that has stirred passions right from its inception.

The structure is designed to rock back and forth

Old mosaics, rare bats get in the way

The idea for the memorial stretches all the way back to 1998 but first gained true momentum in 2007, when the Bundestag decided in favor of building a structure to honor reunification. The idea was for it to be finished in 2009 to mark the twentieth anniversary of the fall of the Berlin Wall.

That proved very optimistic. In the first round of competition, the jury failed to approve any of the 533 designs proposed. It wasn't until after a second round of closed competition that jurors agreed on the current design, which is known among many Berliners as the "unity see-saw" or "unity banana."

Read: Why the Berlin Wall is still big business

Preliminary work on the structure commences in 2013 but was hindered by the need to preserve mosaics from the Kaiser Wilhelm I Memorial that used to occupy the site and was destroyed along with the adjoining Stadtschloss (City Palace) by the East German regime in 1950. A colony of a rare species of vesper bats also had to be relocated.

Resettling the bats cost 100,000 euros ($112,000), and that wasn't only unplanned expenditure. By April 2016, projected costs for the project had risen by 50 percent from 10 to 15 million euros. The Bundestag halted construction as parliamentarians demanded the chance to debate the overruns and consider possible alternative designs.

In February, the heads of the parliamentary factions of the governing grand coalition agreed to go ahead with the monument as planned. And early on Friday, the Bundestag agreed to make up the difference between the actual costs and the money originally allocated for the project a decade ago.

The Bundestag has chosen to mix the old and the new. The decidedly modernist monument will be built on a site that will be dominated by a historical reconstruction of the nineteenth-century City Palace. Some people had lobbied for the reconstruction of the colonnades of the Kaiser Wilhelm Memorial to complement the palace.

The Bundestag's resolution makes that option "impossible." Critics say that this is incongruous since the rationale for a historical reconstruction of the City Palace is to restore the former architectural ensemble of that section of Berlin.

And incongruity has by no means been the only objection to the monument. Left Party critics have questioned why the memorial should be located on that specific site, rather than on nearby Alexanderplatz Square, where the popular demonstrations that helped spell the end of communist East Germany actually took place.

The process of choosing the winning design also came under heavy criticism. One member of the original jury complained that members only took around 30 seconds per submission to evaluate the original proposals, while others carped that "a quarter of the proposals were…complete garbage." 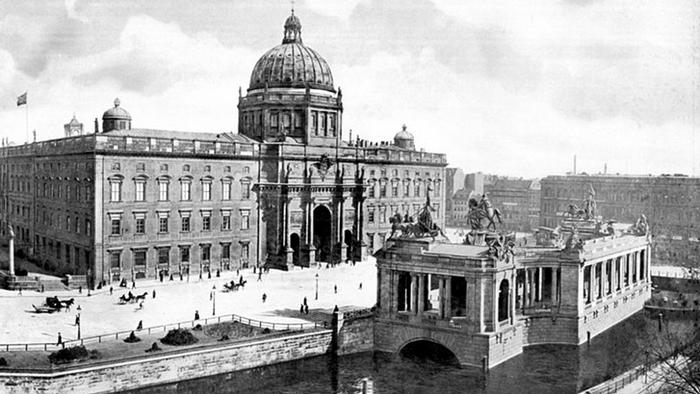 The form of monument, which perhaps unintentionally calls to mind the cliche of East Germans never having seen a banana before they were allowed to visit the West in 1989, has also attracted detractors.

"It's hard to imagine anything more infantile, regressive and tasteless," wrote critic Ulf Poschardt in German daily Welt in February. "I'm not kidding - adults thought this up…The banalization of the revolution by turning it into a kind of see-saw that can be moved around by the playful herd is reminiscent of the handicraft exhibition section of church fairs."

Read: Who's still afraid of the secret police? East Germans shy away from Stasi files

The people of Berlin seem to agree with that poison-pen assessment of the latest planned tourist attraction for the German capital. In a poll published two days before the Bundestag's decision, in which Berliners asked whether they preferred the modernist monument or a reconstruction of the Kaiser Wilhelm Memorial colonnades, 43 percent chose the colonnades, 35 percent had no opinion and only 16 percent opted for "Citizens in Motion."

A further six percent said that they were against any sort of construction on the site, including the reconstruction of the City Palace itself. That just goes to show that with architecture and urban planning, as with German reunification itself, there's no pleasing everybody.

A Berlin monument with a history