A monument honoring the fall of the Berlin Wall and German reunification has been stopped after years of planning. Following nine years of delays, it was finally deemed too expensive. 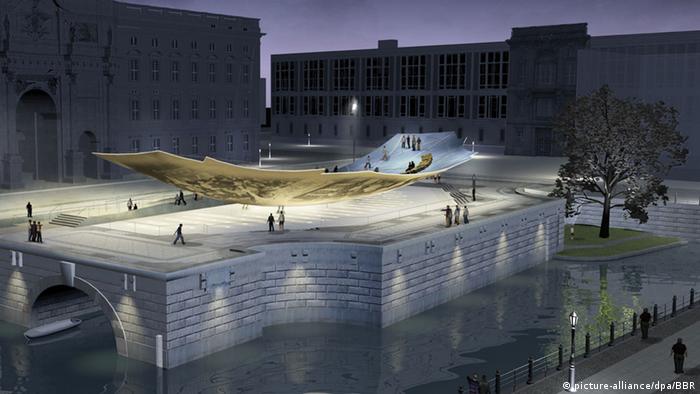 The German parliament's budget committee officially stopped preparations for the planned "Monument to Freedom and Unity" in Berlin on Wednesday.

Culture Minister Monika Grütters regretted relaying the decision, saying the cancellation especially hits hard "the many enthusiastic participants and supporters who initiated this monument project and accompanied it over the years."

The idea was to build a basin-shaped monument designed as a movable scale that would shift its weight when visitors stand in different places. Just like the civil movement that led to the fall of the Berlin Wall in November 1989, and consequently German reunification in 1990, collective action can have an impact, the monument would symbolize.

Its cornerstone was to be laid this year at the Schlossplatz, between the River Spree and Berlin's City Palace. However, plans for the monument came to an end Wednesday in a joint decision backed by both coalition parties, the Christian Democratic Union (CDU) and the Social Democratic Party (SPD).

The ministry of finance reported this month that the cost of the project would total at least 15 million euros ($16.9 million), rather than the initially planned 10 million euros. It was ultimately deemed too expensive.

Designer Johannes Milla from Stuttgart, who created the sketches for the project with Berlin-based choreographer Sasha Waltz, told news agency dpa on Wednesday that he was "completely shocked" by the cancellation. He said his office had already invested 1.7 million euros in the project, and another 1.5 million euros had been spent to secure historic mosaics buried under the site.

Milla said that the estimated total amount of 15 million euros was exaggerated. "That's a number that's been offensively rounded up," he said.

"It's time to pull the plug" on the monument, CDU politician Rüdiger Kruse said. Eva Högl from the SPD agreed: "It's better to end it now rather than have a never-ending story."

A decade after the fall of the Berlin Wall, in 1989, the first calls for a reunification monument were made, but concrete plans weren't decided upon until 2007.

The project faced repeated hindrances and delays, starting with a failed design contest. In the second round, the design by Milla and Waltz found approval, but was criticized by the public and called a "baby swing" or "salad bowl."

In 2012, Waltz withdrew from the project due to differences of opinion regarding the design. In addition to technical difficulties, other setbacks have included the discovery of mosaics buried under the site and the disturbance of bats.

The fall of Berlin's Palace of the Republic

The Palace of the Republic in Berlin was regarded as a powerful symbol by the East German government and yet 10 years ago, it was decided that the Erich Honecker's ostentatious display had to go. (19.01.2016)