Germany's parliament has changed the constitution so that extremist parties can no longer claim government funds. Critics call that undemocratic, but lawmakers say Germany's political system is entitled to defend itself. 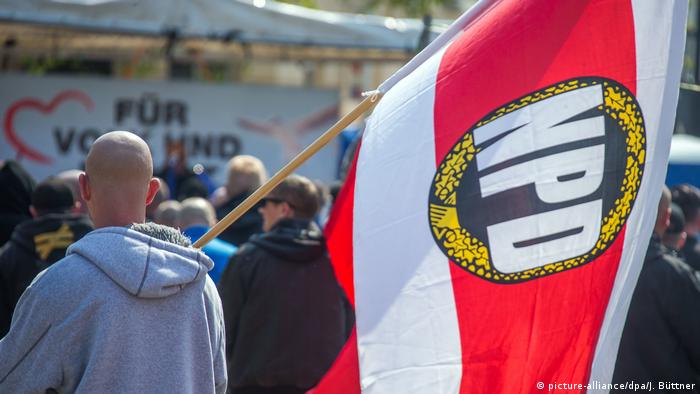 A majority of 502 of 579 delegates in the German Bundestag voted Thursday in favor of amending the country's constitution to deprive anti-democratic political parties of federal money. One of the first groups likely to be affected by the new rules is the far-right National Democratic Party (NPD), which received 1.1 million euros ($1.2 million) last year.

"The state is under no obligation to finance enemies of democracy," Maas said in a statement just ahead of the vote. "Devoting tax money to the NPD is a direct state investment in radical right-wing incitement."

From now on, financial support will be contingent on the party not having designs on undermining German democracy. Parties that don't fulfill that criterion will have no recourse to public funds for a period of six years. And that's bad news for the NPD. 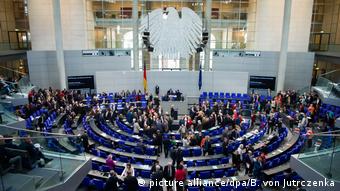 A clear majority of delegates voted to change the constitution

MPs from the conservative CDU-CSU and the center-left Social Democrats (SPD), who together form Germany's governing coalition, all voted for the amendment, portraying it as an example of German democracy defending itself.

Helmut Brandt of the CDU called it a "contradiction" to give money to a party that wanted to get rid of the constitution when the government also spends some 104.5 million euros a year to combat such views.

"It's the task of politics to protect democracy from efforts to destroy it," Brandt said, adding that Germany needed "possibilities for sanctioning parties that fall short of a ban."

Gabriele Fograscher of the Social Democrats expressed similar sentiments and denied that the legislation was aimed specifically at the NPD, saying that it would apply to all extremist parties. She added that the money saved by the government ought to go to fighting "right-wing extremism and anti-Semitism."

Unusually, the majority of the opposition Left Party parliamentary group also voted with the governing parties.

"For me fascism isn't one opinion among many in democratic competition," Left Party spokeswoman Utta Jelpke said. "It's a crime. That's why my party says: not one cent for a Nazi party." 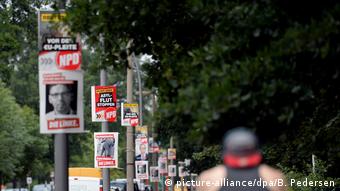 The government won't be paying for any NPD campaign posters

The road to the amendment

The Bundestag vote is the latest chapter in a story that began and may very well end with the Federal Court of Justice, Germany's highest court.

Thursday's legislation had its origins in a failed attempt to ban the NPD. On January 17, the Federal Court of Justice rejected the ban saying that although the party was in fact hostile to the German constitution, it was too small to be considered a genuine threat to German democracy and thus didn't qualify for a ban. The court did, however, say that the government had "other possibilities to react and show that there is no room in political parties for racism, anti-Semitism and hostility toward democracy."

Lawmakers immediately drafted a change to the constitution barring "parties that undertake activities hostile to the existence of the Federal Republic of Germany and its free, democratic fundamental order" from receiving state funds or tax breaks. The draft legislation passed Germany's upper house of parliament, the Bundesrat, unanimously in February.

But there was no unanimity in the Bundestag on Thursday. 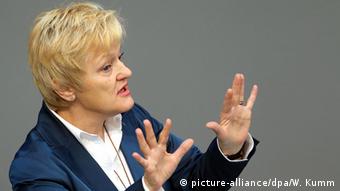 Alone among the parties, the Greens voted against the legislation. An emotional Greens spokeswoman, Renate Künast, said that the law did in fact specifically target the NPD and that changing the constitution was an incommensurate way of going after a "political dwarf."

She also accused the government of using the legislation to suggest that it had solved the problem of right-wing extremism and worried about it being employed against other parties with dissenting views.

"What I don't want to see is this rule being used against us," Künast said.

That drew an angry response from the Greens' former coalition partners, the SPD, who cited the fact that their party had been banned in Nazi Germany after voting against the 1933 Enabling Act that gave Adolf Hitler dictatorial powers.

"We're not going to let anyone tell us we don't have the right to keep working on this legislation," said the SPD's Rolf Mützenich. 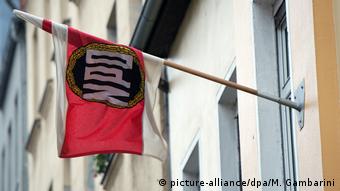 It is unclear what the NPD's next move is

Game over for the NPD

The NPD has suffered a dramatic drop in membership in recent years, thanks in part to the rise of the right-wing populist Alternative for Germany (AfD) party, and is thought to be in financial trouble.

In a statement on the party website, deputy party chairman Ronny Zasowk wrote: "This law directed specifically against the NPD is supposed to make it clear to all those with unpopular opinions that their political participation in our country is unwanted."

The Republicans, another small German party on the far right and in some respects a rival of the NPD, also condemned the law.

"In our eyes, the attempt to dry up the party's finances isn't the right way to go about things," party spokesman Andre Maniera told DW. "You have to ask yourself: which party is next?"

Theoretically, the NPD could challenge the legislation in court, but there was no immediate indication of whether the party was prepared to do so.

All the major political parties are represented in the top-level Presidium of the Bundestag, Germany's parliament, except one: the far-right AfD. Is that fair, or democratic? Germany's top court is examining the case.