Yet another superlative display by Erling Haaland inspired Borussia Dortmund to an impressive Ruhr Derby win over rivals Schalke. But Dortmund remain outside of the top four—and they cannot afford to stay there. 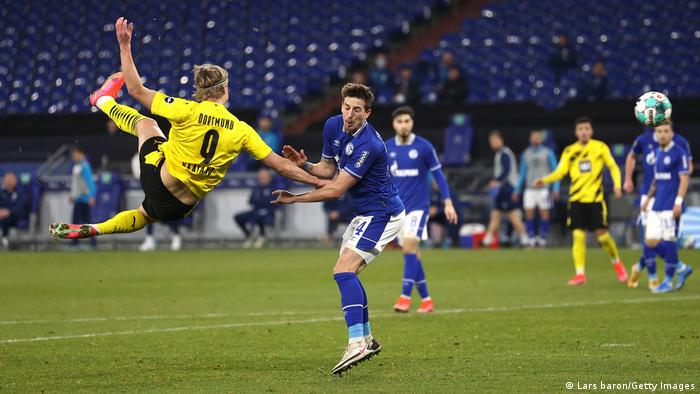 Any regular player would have taken a touch or maybe gone for it with their head. Very few would have even attempted what Erling Haaland did. But Haaland took on the spectacular option, adjusting his body to unleash an acrobatic yet controlled volley. Needless to say, it flew straight in.

That moment of majesty went a long way towards settling the Ruhr derby in Dortmund’s favor once again. It followed Jadon Sancho’s opener three minutes earlier as Dortmund’s big game stars stepped up at just the right time.

By the time Raphael Guerreiro added a slick third after the break and Haaland notched a fourth, Schalke’s third straight Ruhr derby defeat was merely the latest episode in the series of tribulations that have stalked their sorry season. Nine points from safety and with just one win all season, Christian Gross’s side will soon have no option but to plan for life in Germany’s second tier. 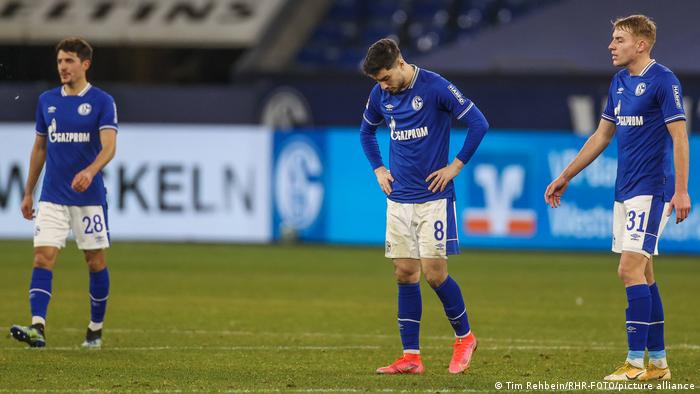 Schalke have won just one game all season and are nine points from safety.

Dortmund made the 30 kilometer journey to Gelsenkirchen nine points off the top four and in the knowledge that their chief top four rivals, Wolfsburg and Eintracht Frankfurt, had already won. The pressure was on.

This was not the first time this week that Dortmund have relied on the individual ability of their Norwegian superstar. In Seville on Wednesday, Haaland’s heroics almost single-handedly dragged them to an impressive victory in the Champions League.

And back in Germany he did it again, continuing his formidable form to make it 43 goals in 43 games. It’s worth dwelling on that statistic for just a moment.

Dortmund's interim coach, Edin Terzic, was pleased with the result, but was measured in his praise of the team.

"We came here to win the derby, and we succeeded," he said, with a smile on his face. "We are very pleased with the way we scored the goals. The way we performed in Seville and here is, of course, what we want. But it's a process, it will take time, there will be setbacks. It takes time."

The problem is, while Dortmund have already secured the services of Borussia Mönchengladbach coach Marco Rose starting this summer, they simply cannot afford to finish outside of the top four.

The club reported losses of €26.3million in the first half of the 2020-21 season, with the extended absence of fans at Signal Iduna Park, Germany’s biggest stadium, blowing a black hole in their finances. The potential double whammy of COVID-19 and no Champions League football would force Dortmund’s hand into selling one or both of their star assets. 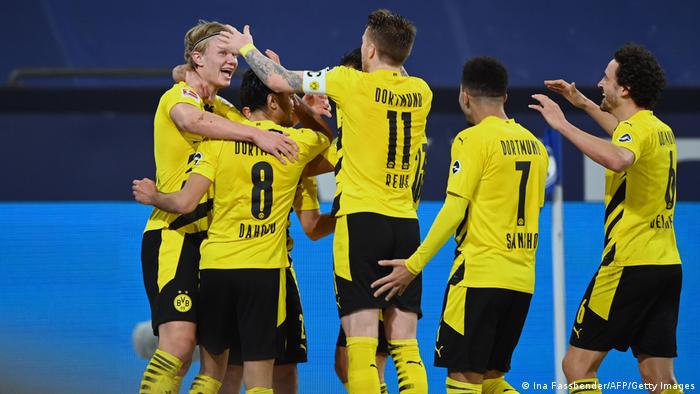 While Haaland might be persuaded to stay in Dortmund for a second full season, a Bundesliga finish of fifth or lower would make Sancho’s return to England a formality. And with Dortmund seeing red on the balance sheet, Manchester United—his likely suitors—will fancy their chances of negotiating a bargain.

And in Haaland’s case, his red-hot form will surely convince one of Europe’s big guns to unlock his buyout clause, which kicks in this summer and, at €75 million, is around half his value in the current market.

This derby win will feel good for Dortmund, who will always relish a big win in their neighbor’s back yard—not least one that pushes them closer to relegation. But with at least one of Dortmund's stars all but certain to leave, there are still dark clouds over both sides of the Ruhr Valley.