Champions League: Haaland heroics give Dortmund the edge against Sevilla 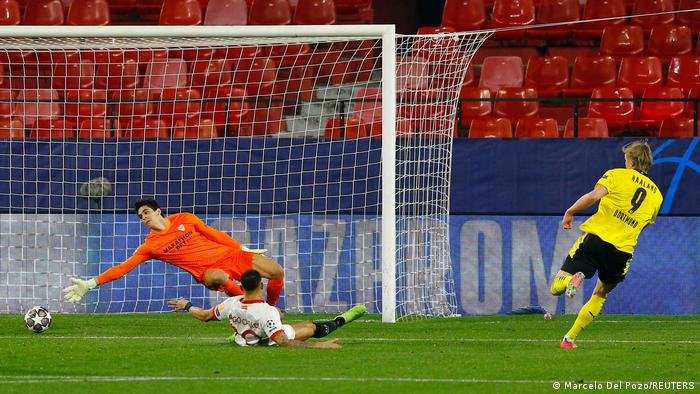 Sevilla hadn't conceded in 728 minutes of football going into this game, making them the second best defense in Spanish football this season. But spearheaded by the irrepressible Erling Haaland, Borussia Dortmund saw off one of Spain's finest in their own backyard.

Haaland had warned his teammates that they "don't stand a chance" if they bring their domestic form to Spain. Dortmund heeded the warning and Marco Reus, who has been somewhat outspoken about Dortmund's abject performances of late, gave a glowing assessment at full-time.

"It feels very, very good, I'm really happy. We put an exclamation mark here," captain Reus told DAZN. "In the second half we were a bit too passive, but overall it was really good."

Dortmund, who confirmed Borussia Mönchengladbach coach Marco Rose will take over as permanent coach in the summer, started the game well but were stung when Sevilla grabbed a fortuitous opener. Suso's speculative shot took a double deflection – off Jude Bellingham and Mats Hummels – before wrong-footing the bewildered Marwin Hitz in the Dortmund goal.

The leveller came soon after though. Mahmoud Dahoud, the much-maligned midfielder who has struggled as much for game time under Edin Terzic as previous Dortmund coaches, was only in the team due to Thomas Delaney's absence. But it was Dahoud who led the fightback with a piece of individual artistry. Sidestepping a Sevilla challenge, Dahoud let fly with a sensational shot that arrowed into the top corner. It was an all too rare flash of the abundant talent that Dahoud possesses. 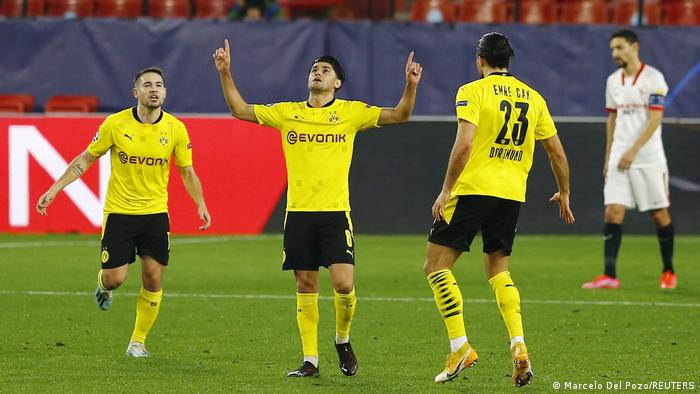 Dahoud celebrates his first ever Champions League goal — and it was worth the wait.

All that followed was about one man and one man only. Erling Haaland is putting up the kind of numbers that Lionel Messi and Cristiano Ronaldo would be proud of. The fastest player to reach five, 10 and 15 Champions League goals, Haaland's brace in Andalusia takes him to 18. He's scored in all five Champions League games he's featured in this season.

No 20-year-old has ever scored more in Europe's elite club competition, but with Haaland, it's not just the sheer volume of goals he scores but the relative ease which seems to accompany each one. Built like wilderbeast, he is blessed with a quick feet, searing pace and of course an insatiable lust for goals. His total in a Borussia Dortmund shirt is now 42. He's only played 42 games.

His first and Dortmund's second was pure Haaland. Dropping deep to receive the ball, a powerful and direct run that put so much fear into Sevilla's defenders that none of them wanted to touch him. Halaand exchanged passes with Jadon Sancho, whose deft touch allowed Haaland to ramm home in front of a petrified Yassine Bounou in the Sevilla goal.

Half time was drawing in but Haaland wasn't done. Reus seized on a loose pass and led a counter attack that overwhelmed Sevilla, and Reus' perfect pass was finished first-time by Haaland in similar fashion.

Sevilla spent much of the second half in a daze at how brazenly their defense had been breached, but finished the game strongly as Dortmund tired. Luuk de Jong came off the bench and caused problems before pulling one back for the Spaniards. Things could have been even better for Dortmund and they bring three away goals back to Dortmund for the second leg — but this one is far from over.