After losing their unbeaten record, leaders Borussia Dortmund got back to winning ways but Bayern are showing signs of getting back to their best. Strugglers Hanover and Nuremberg really need the winter break. 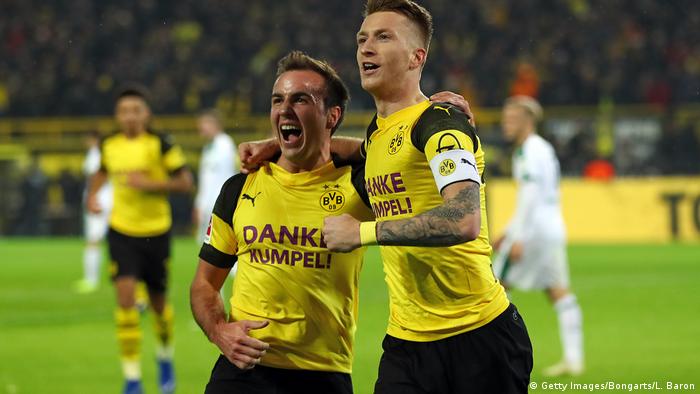 - After losing their first league game of the season in midweek, Borussia Dortmund bounced straight back to claim a  2-1 win over Borussia Mönchengladbach, who were second coming in to the weekend. Jadon Sancho and Marco Reus were on the scoresheet for the league leaders but substitute Mario Götze also shone and provided two assists. After a tough few years, Götze seems to be finding his way again and his side go in to the winter break six points clear.

- Bayern Munich kept up the pressure on their title rivals with an impressive 3-0 away win at Eintracht Frankfurt, making it five league wins and four clean sheets in a row. Franck Ribery defied his advanced age once again to grab a brace and the title race is most definitely on in 2019. About time.

- Domenico Tedesco will be one of the league's more relieved coaches going in to Christmas, with his side winning the clash of two of the league's biggest underperformers to finish a difficult half-season in 13th, seven points clear of the the relegation spots. The 3-1 win over struggling Stuttgart was  notable for the performance of Ahmed Kutucu. The 18-year-old striker, a Schalke youth product, scored his first Bundesliga goal in his second appearance. In a team that have struggled for goals, could the solution be internal?

- Heiko Herrlich may not enjoy his Christmas break quite so much. The Bayer Leverkusen coach has appeared on the brink of the sack for the whole season but the timing of his dismissal on Sunday was surprising after a run of four wins in his last five games.

- Fortuna Düsseldorf are on fire. A vital three points against Freiburg was followed by inflicting Borussia Dortmund's first loss and then Friedhelm Funkel's players made it three in a row to close out 2018 with a 90th-minute winner away at fellow relegation battlers Hanover.

- Things are not going anywhere near as well for the other promoted side, Nuremberg. A 1-0 home loss to Freiburg means they haven't won since September, haven't scored in their last four, have the league's worst defensive record and its second worst attack. Despite those grim figures, a decent start leaves them just three points off Stuttgart who occupy the relegation playoff spot. What that says about the quality at the bottom of the table is another matter.

- Wolfsburg's 3-2 win over Augsburg on Sunday means they and Bayern have the league's joint best record over the last six matches and the Wolves go up to fifth. They're just five points off their total for the whole of last season.

"I watched the DFB Pokal final three times. Once as a coach in the stadium, and two more afterwards. I felt goosebumps on each and every time.” - Bayern Munich coach Niko Kovac reminiscing about conquering his current club with Frankfurt last term after the sides met on Saturday.

"Bayern to win the league? That's what we assume in Munich.” - Kovac again, showing that his integration in Bavaria is going to plan.

"There has been an undeniable stagnation in the development of the team." Rudi Völler sticks the boot in on the departing Heiko Herrlich.

"Two assists from the bench – I think Paco's rubbing off on me," Mario Götze has learnt from teammate Paco Alcacer.

"I couldn't even dream of such a week, if I'm honest.” - Fortuna Düsseldorf coach Friedhelm Funkel with an honest reaction to three wins in a week.

- With 42 points, Borussia Dortmund's first half-season was the club's second best ever, one point behind Jürgen Klopp's title-winning 2010/11 side.

- Hoffenheim's 1-1 draw with Mainz ono Sunday was their sixth consecutive stalemate in the league.

- Slippery conditions often make for a nightmare before Christmas for goalkeepers but there were no such excuses for two of the division's more reliable stoppers, who both made similar errors on the same afternoon.

Jiri Pavlenka (Werder Bremen) and Rune Jarstein (Hertha Berlin) both made a mess of things with their feet which contributed to defeats. Pavlenka went short to an under-pressure Max Kruse from a goal kick and was unable to reach the underhit back pass, allowing Timo Werner to nip in and score. Jarstein's was even worse, the Norwegian taking the heavest of touches on a backpass - Kai Havertz took full advantage.

So far this season, Bayern Munich have not looked anything like the side that won six consecutive league titles. While Niko Kovac deserves some blame, DW's Davis VanOpdorp believes he deserves a fresh start in 2019. (23.12.2018)