The European Commission has asked Germany to help bear the burden of caring for unaccompanied children in Greece's overcrowded migrant camps. On the eve of Christmas, Germany's interior minister has rejected the calls. 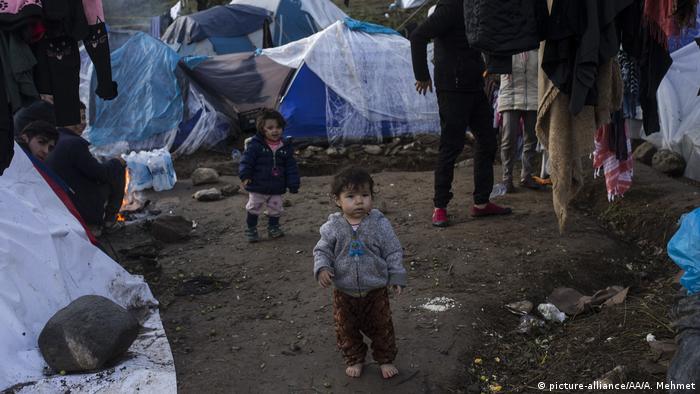 "The Commission is concerned about the difficult situation for unaccompanied minors on the ground in Greece and remains in close contact with the Greek authorities, notably as concerns the situation on the heavily overcrowded islands and the very challenging situation in the hotspots," a spokesman told DPA news agency.

"In particular as regards the more than 5,000 unaccompanied minors, the Commission has repeatedly called upon the member states to continue relocating from Greece on a voluntary basis, with funds provided by the Commission," the spokesman added.

"The political initiative launched to this end by Greece in October, which the Commission supports, remained so far with limited response by the member states," the spokesman asserted.

The request comes after the German Greens Party called on the ruling coalition to accept children from the migrant and refugee camps in Greece. Greens party leader Robert Habeck told Frankfurter Allgemeine newspaper that children were living in intolerable conditions.

Just on the islands of Lesbos, Chios, Samos, Leros and Kos, almost 2,000 unaccompanied children are registered, according to European Union figures. Across the whole country, there were 5,276 as of November.

About 9% of the unaccompanied children are under the age of 14; 92% are male.

Seehofer told the paper that a solo effort by Germany would lead to a pull effect that no one could control, suggesting that traffickers would use the action to encourage potential clients to be patient and wait for Germany to give in.

Deputy government spokeswoman Ulrike Demmer told Frankfurter Allgemeine Zeitung that the Federal Government remained committed to seeking a European rather than a national solution for the admission of migrants from camps in Greece. She said it was "naturally" a concern of the federal government to "improve the living situation of all people on the ground, including children," but that a European-wide effort was the solution.

Development Minister Gerd Müller told the Passauer Neue Presse that the children were best helped in situ. The camps have been described as a "living hell" for those living there.

Germany's top cardinal, Reinhard Marx, told the paper he was grateful for what the German government had already done, but that on the eve of Christmas, something must be done to help end an "intolerable situation." Similar comments were made by the Protestant Church.

The recent death of a 15-year-old unaccompanied minor in Moria has once again highlighted the plight of young refugees in Greece. As refugee numbers swell, those minors are becoming increasingly vulnerable. (29.09.2019)

Refugee family reunification in Germany has proven a major source of division in Angela Merkel's governing coalition. DW explains how the process works and what the main points of contention are. (29.12.2017)