Two German parties are at loggerheads over how to deal with overcrowded migrant camps in Greece. The Greens are urging the government to come to the aid of 4,000 children, while the CDU said it is "not a solution." 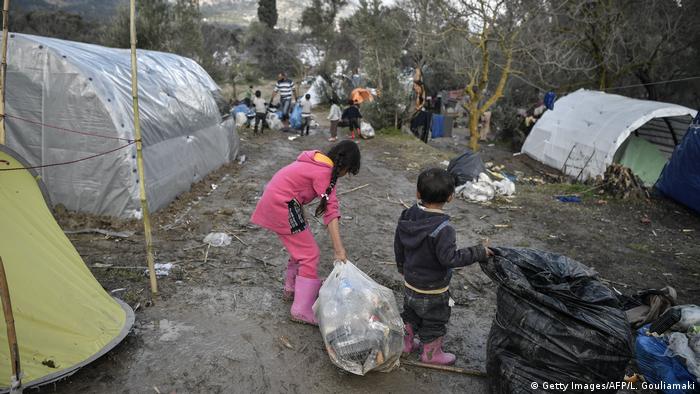 Christian Democrat (CDU) Günter Krings, who also serves as parliamentary undersecretary in the interior ministry, responded to the Greens' demand to aid thousands of children who are currently residing in the camps off the Turkish coast.

Green party leader Robert Habeck had asked the Berlin government to bring thousands of migrants from the Greek camps to Germany.

Roughly 4,000 children, including "many girls, many fragile little people," are in need of urgent help and it is a "requirement of humanity," he insisted.

Other ideas on how to tackle the problem

Krings, though, had a very different take on proceedings as he emphasized that helping from a distance was a more appropriate measure. The CDU lawmaker added that the acceptance of children by Germany would "bypass all European legal rules."

"And for the vast majority of people, they would not change the unacceptable conditions on site," he added.

Read more: What Germany's post-war refugees taught us about integration

The MEP Stephan Mayer (CSU) expressed similar sentiments. "If Germany went it alone at the moment, the other EU countries would avoid their responsibility," Mayer told the newspapers of the Editor Network Germany (RND).

For the admission of unaccompanied minors, the interior ministry is looking for a unified "solution at European level" and are making efforts in close collaboration with the European Commission to help solve the issue.

Just last week Greece said it expects a further influx of asylum seekers in 2020, predicting up to 100,000 may arrive on its islands from Turkey in the coming year.

UN refugee compact receives a mixed scorecard a year on

On December 17, 2018, the United Nations General Assembly adopted the Global Compact on Refugees. Has the protection of refugees around the world improved since then? (17.12.2019)

Two years ago hundreds of thousands of Rohingya fled Myanmar to Bangladesh. Many are now trying to escape the refugee camp's hardships, with some heading to Malaysia in small boats, risking their lives in the process. (02.09.2019)

The UN has described rising numbers of people fleeing their homes, saying more must be done to "shoulder this responsibility." German Foreign Minister Heiko Maas said Germany will welcome more refugees in the future. (17.12.2019)