Britons want Brexit clarity one year on | Europe| News and current affairs from around the continent | DW | 19.06.2017

A year after the Brexit referendum, Britons are frustrated at the lack of progress and certainty. And the strict two-year timetable imposed under Article 50 means that the clock is ticking.

This week marks a year since Britain's shock vote to leave the European Union. The vote, on June 23, 2016, kickstarted a period of political upheaval. Theresa May took over as prime minister, triggered Article 50, called a snap election, and lost her majority. Yet exactly what Brexit means is still unclear.

"Brexit has been held up first of all by a series of elections. But it has also been delayed by debate about what Britain's Brexit agenda should be," says Matthew Cole, lecturer in history at Birmingham University. "Theresa May made an honorable attempt to close down that debate in January with her speech about leaving the single market, leaving the customs union, taking control of immigration. But the general election has expanded that debate considerably."

The clock is ticking for Britain's exit from the EU - Article 50 sets out a strict two year timetable, meaning a deal must be agreed by March 2019 - but negotiations have yet to start in earnest.

"I don't think my opinion has changed since the vote - I just think it's a terrible idea and no one has convincingly presented an argument as to why we should go ahead," says Oliver Zanetti, research associate at the Open University and a Remain supporter. "Nobody has the bravery or intelligence to say there is no coherence to this, we're not doing this for a reason, we're doing it because nobody is going to tell us not to do it. It's absolutely heartbreaking."

When May called this month's general election, it was widely expected she would win by a landslide. In fact, she lost her majority due to a disastrous Conservative campaign and an unexpected surge for Labour. During the campaign, Brexit largely fell into the background, with a greater focus on Labour's anti-austerity platform.

"In many cases, people's anger towards the EU is not particular to the EU itself. It became a protest vote about political structures in general; structures which have left people disenfranchised and alienated," says Rosa Rankin-Gee, a British writer based between London and Paris. "In many ways it felt like the British people finally said ‘enough' and had a revolution - except to me a least, it was very much the wrong one." 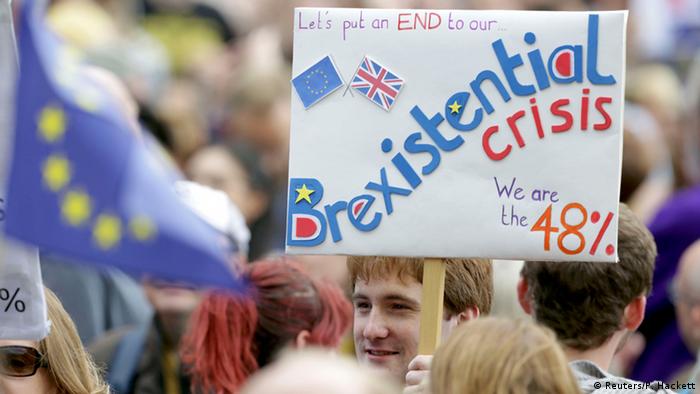 A protest against Brexit in July 2016

Although 48 percent voted to remain in the EU, more recent polls suggest that a significant proportion of those voters now believe it is the government's duty to pursue Brexit. Yet the continued vagueness over what this will mean for Britain is frustrating even for those who wanted to leave.

"The quality of debate amongst the politicians and in the media is remarkably poor. Yes, Brexit is very complicated but, a year on, we haven't even got past the most basic discussions about what it really means and the trade offs involved," says Paul Gabriel, a teacher who supports leaving the EU. "I think lots of politicians and journalists don't actually understand the issues, which is why they keep falling back on sound bites. Those who do understand aren't being honest - for instance, about the fact that we will almost certainly need a transition period."

In the aftermath of the shock election result, there have been some calls for cross-party collaboration on Brexit - an issue which has been highly partisan thus far. "In the disrupted, unpredictable circumstances we now have, the Article 50 timetable is unrealistic and therefore it looks like Brexit is going to dominate British politics for some time," says Cole. "The best hope for avoiding that is the development of some sort of consensus position. Senior politicians are talking about this privately and to some extent publically. This is being treated almost like a war, where there's a need for bipartisanship."

European Union and British negotiators have agreed on priorities and a timeline for Britain’s exit from the bloc. Citizens' rights, Britain's exit bill, separation issues and Northern Ireland will be addressed first. (19.06.2017)

The number of Britons seeking German citizenship nearly quadrupled last year. The number is expected to rise as Brexit nears. (13.06.2017)

Hard or soft: How will the UK take its Brexit?

What are the key issues in the Brexit negotiations?

With Brexit negotiations due to begin on June 19, DW looks at the key issues to be debated in Brussels. Talks are expected to conclude by next year, with the UK scheduled to formally withdraw from the EU by March 2019. (14.06.2017)