With just 15 days to go until the UK is due to leave the EU, British lawmakers have voted to delay Brexit by at least three months. EU leaders will have the final say, with many demanding a clear reason from London. 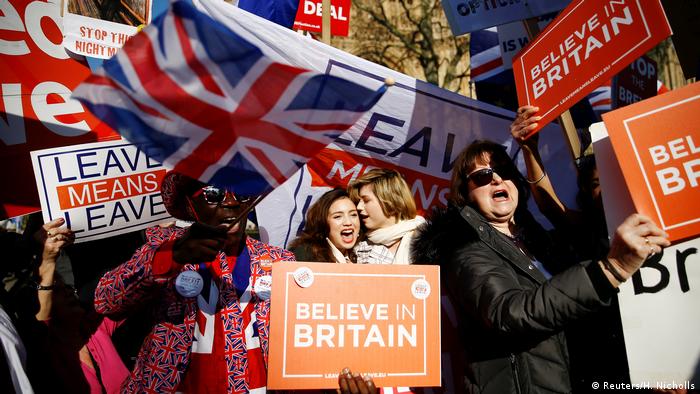 Lawmakers in the House of Commons overwhelmingly backed a government motion on Thursday to ask for a three-month delay for Britain's departure from the European Union, which is currently scheduled for March 29.

The move has also paved the way for a third vote on Prime Minister Theresa May's divorce deal with the European Union, which could take place early next week.

Thursday's vote came at the end of a week of defeats for May, which saw her Brexit deal voted down for a second time on Tuesday, as well as a vote on Wednesday which saw lawmakers reject a no-deal Brexit under any circumstances.

The vote means May's government will ask the EU for a one-off extension to Article 50, extending the divorce date until June 30.

But there is one condition: May will only ask for the short-term extension if lawmakers approve the withdrawal agreement she negotiated with the EU. British lawmakers have already rejected May's divorce deal in two prior votes by record margins.

Should MPs vote to support the deal by March 20, May will request the short-term extension when she heads to an EU leaders summit in Brussels, which is taking place on March 21 and 22.

If her deal is rejected a third time, the prime minister will still try to secure a short-term delay, although she will be heading to Brussels without a clear reason for the extension — something EU leaders have said is a must in order to secure a delay.

May has warned that the UK could face a much longer Brexit delay if her deal is not approved, and that the UK would have to hold European Parliament elections in May if an extension goes beyond June.

Read more: Brexit — Is the EU willing to grant an Article 50 extension?

Although British lawmakers voted to support extending the Brexit deadline past March 29, it's not certain the EU will grant it.

EU leaders have expressed frustration at the political turbulence taking place in London, saying they would grant an extension but would need a concrete reason from the UK for doing so.

Shortly following the vote on Thursday, a European Commission spokesperson emphasized that any extension would require "unanimous approval" from the leaders of the remaining 27 member states.

Guy Verhofstadt, the European Parliament's Brexit coordinator, said British lawmakers need to make clear what they want and that the EU should push the UK to move Brexit forward.

"We have to increase the pressure," Verhofstadt told German broadcaster ZDF. "How many votes have there been, and every time it’s a negative majority, a majority against something. The time has come where we must see a broad majority that goes beyond the party lines."

The decision also throws more uncertainly onto Britain's trade relationship with the EU. In light of the vote, the head of Germany's main association of chambers of commerce and industries, DIHK, told the press that European businesses have been left with no idea what scenario to be ready for and when.

"The companies no longer have any idea what they should be preparing for," Martin Wansleben told the publisher Funke Mediengruppe.

Trump 'surprised at how badly' Brexit has been going

US President Donald Trump weighed in on the upheaval surrounding the UK's departure from the EU on Thursday, saying he is "surprised at how badly" the negotiations have been going and that the Brexit debate is "tearing the country apart."

He also criticized May's handling of the negotiations, saying she did not heed his advice.

"She didn't listen to that, and that's fine. I mean ... she's got to do what she's got to do. But I think it could have been negotiated in a different manner, frankly," Trump told reporters at the White House ahead of a meeting with Irish Prime Minister Leo Varadkar.

Trump added that he still hopes to secure a "large scale" trade agreement with the UK.