British Foreign Secretary Jack Straw on Monday confirmed in a speech to the House of Commons that Britain would not proceed with a referendum on the EU constitution following its rejection by French and Dutch voters. 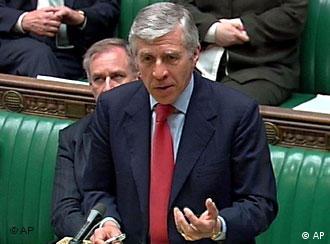 Straw said there was "no point in proceeding" with the referendum

As had been widely expected, Straw told British lawmakers the government's plans for a vote on the EU charter would be shelved amid the current crisis in Europe.

"We reserve completely the right to bring back the bill providing for a UK referendum should circumstances change. But we see no point in proceeding at this moment," Straw told parliament.

"It is not for the UK alone to decide the future of the treaty," he said, adding that the first chance for collective discussion was at next week's heads of government summit in Brussels.

End of the road?

In the eyes of many, the Straw announcement is just one more shovelful of dirt in what is turning into a very deep constitutional grave. Nobody wants to go the step of declaring the treaty dead but with three of the EU's powerful members either rejecting the constitution or fearing even putting it to a vote, Brussels must rethink the whole matter. This was a point that Straw also expressed in the House of Commons.

"Until the consequences of France and the Netherlands being unable to ratify the treaty are clarified, it would not in our judgment now be sensible to set a date for second reading" of the legislation for the referendum, he said. 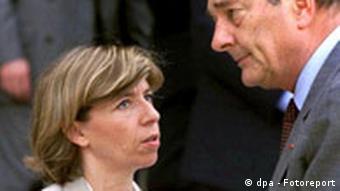 France, whose voters were the first to reject the charter, and Germany are still urging the ratification process to proceed. French minister for Europe Catherine Colonna (photo) said it was "desirable" that voting should go ahead in other states.

"This decision by Great Britain ... is not something which changes France's position," she said in the sidelines of a meeting of EU Europe ministers in Luxembourg.

"France's position, as that of Germany, is that it is desirable that the process of ratification continue out of respect for the 12 countries which have already expressed themselves and also due to the demands of democracy and respect for those who want to do so," she added.

Yet the necessity of still voting for the treaty is lacking substance for many, particularly in euroskeptic Britain. After all, without unanimous approval the charter cannot go into effect. Britain's responsibility is all the more acute as it prepares to assume the rotating EU presidency on July 1. 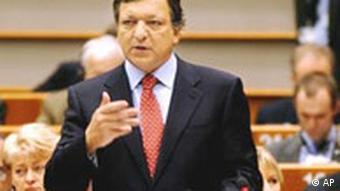 Barroso said no definitive decisions had been made by any member state. "So far, on the contrary, all the indications I have from all member states including the United Kingdom is that they want to discuss this issue in the European Council," he said, referring to an upcoming June 16-17 summit of EU leaders in Brussels.

Polls in Britain show a strong majority against the treaty,
which is aimed at streamlining and harmonizing how the European Union is structured and run as the bloc expands.

Prime Minister Tony Blair's office said Britain needed time to reflect on the fallout of the Dutch and French votes but insisted it was not pre-empting any decisions European leaders may make at the Brussels summit.

"Europe has to be More Modest"

Elmar Brok, conservative European MEP and member of the convention which drew up the EU charter told DW-TV that it should have been approved before expansion and warned the EU had to take note of its citizens' concerns. (June 4, 2005)

Turkey's hopes of EU accession remain high despite the rejection of the EU constitution by France and the Netherlands and a potential swing to the right in Ankara's key supporter Germany. (June 2, 2005)

The EU risks further turmoil as it fights to avoid a escalation of one of its worst crises even as French and German leaders underlined Saturday that the ratification process of the new constitution should go on. (June 5, 2005)