Bright spot for US solar industry in the ′Sunshine State′ | Business | Economy and finance news from a German perspective | DW | 01.10.2018

Bright spot for US solar industry in the 'Sunshine State'

Despite rising trade tensions and Donald Trump's recent tariffs, soaring demand for clean power has prompted solar panel manufacturers in the US state of Florida to ramp up production. Daniel Hicks reports from Florida. 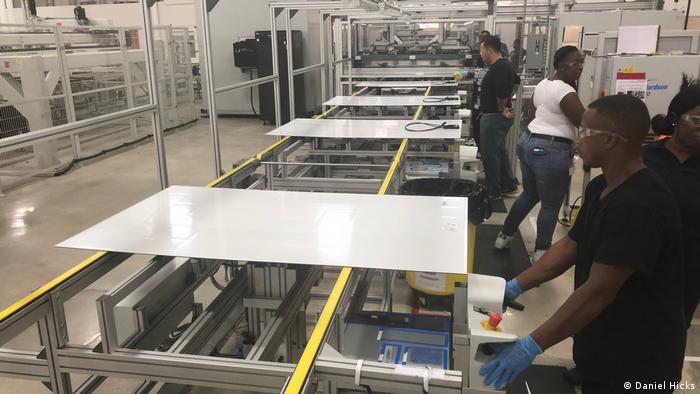 Frank Cestero is in a sweet spot. The Puerto Rican gets to enjoy the warm, tropical weather of Palm Beach County in the US state of Florida, while the small company he works for is booming thanks to robust growth in the global renewable energy sector.

Cestero is the chief financial officer (CFO) of SolarTech Universal, headquartered in the coastal city of Riviera Beach.

Read more: Trade frictions could cause 'major recession in Germany'

Founded in 2012, SolarTech's panels are made using advanced robotics and solar cell technology designed by the company's European partner, Meyer Burger, a Swiss firm operating in Germany and Singapore.

Its cutting-edge equipment allows the green energy company to focus on the premium end of the market. That seems to be working out. SolarTech will be adding a second production line by the end of the year, creating an expected 70 new jobs in the process.

"Demand is robust," said Cestero. "We're very bullish over the next 24 months."

Governments and businesses have increasingly set their sights on harnessing the power of the sun to meet their energy needs. Furthermore, government policy changes in response to climate change have created incentives and mandates at the local, state and national levels.

Change in the air for German solar industry

Demand for clean power has also been on the rise over the past several years, with consumers seeing the benefits of shifting to clean sources of energy and decentralized power distribution.

Against this backdrop, companies big and small are optimistic about the future.

Market players like CED Greentech, a large US solar panel distributor and SolarTech customer, have increased their investments over the past couple of months.

"The market is pretty dynamic," said Tristan Tedford, a CED Greentech account manager setting up shop in Pompano Beach, a city just north of Fort Lauderdale. "Module prices have dropped and you have an emerging electric vehicle market coming."

The industry's growth and increasing strategic significance, coupled with complaints from American solar manufacturers about unfair trade competition, were all a part of the reason why US President Donald Trump zeroed in on solar panels, among other products, for tariffs in early 2018.

"The tariff narrowed the price gap between the Chinese product and US product and by highlighting the US product, it has increased awareness of US-made products among end-users and middle-market buyers," Cestero said. He claims that by the end of this year SolarTech will be the only domestic manufacturer of exclusively US-made panels, with over 70 percent of its inputs sourced domestically.

This is significant because it gives a niche player like SolarTech access to the lucrative public sector, as state and local governments strive to meet CO2-reduction targets by increasing public investment in green energy. 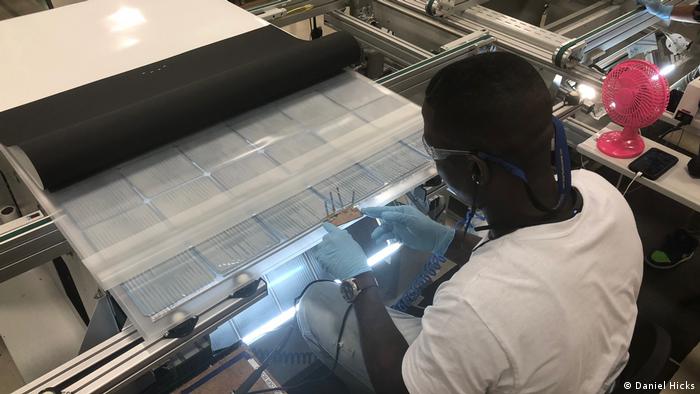 But some in the US solar industry have aggressively pushed back against Trump's tariffs.

One example is SunPower, which is majority-owned by French oil giant Total. The San Jose-based company threatened to curtail its new capital investments and slash jobs if it didn't receive an exemption from Trump's tariffs.

The company builds most of its solar products in Mexico and the Philippines and has argued that the millions of dollars it would pay in import duties threatened its growth plans.

After months of lobbying the Trump administration, SunPower received an exemption from the tariffs, boosting the firm's stock price.

The latest industry figures value the US solar sector at $28 billion (€24.13 billion). The industry employs more than 250,000 Americans, with about 40 percent of those working in installation and 20 percent in manufacturing. Five years ago, the sector was installing 3,000 megawatts of solar capacity annually. In 2017, the market grew by as much as 10,000 megawatts.

But experts fear this kind of growth will soon be a thing of the past. Dan Whitten, a spokesman for the US Solar Energy Industries Association, said that since January, more than $2.5 billion in solar projects have been canceled and roughly 9,000 American jobs have either been lost or have not been created as a result of the tariffs.

"If demand drops because products are artificially made too expensive for consumers, nobody wins. It's unlikely that US manufacturing will expand enough to satisfy burgeoning demand," Whitten told DW. "While we support new US manufacturing, companies are still going to have a hard time competing with products from overseas in the years ahead."

Once the factory reaches full production after November, JinkoSolar expects it to churn out more than 1 million panels a year for the US market.

Still, city officials in Jacksonville see the new Chinese investment as a major win for local businesses, particularly in services and logistics. The adjacent port expects to handle cargo shipments of raw materials and solar panel components needed for the new plant's operations.

"In addition to creating 250 new jobs, we expect that JinkoSolar will expand its economic impact in the Jacksonville area as the demand for solar panels in the US grows," said Tia Ford, a city spokeswoman.

Saudi Arabia and its funding partner Softbank have reportedly shelved plans for the $200-billion project. It was part of the kingdom's economic transformation plan and would have produced three times the energy it needs. (01.10.2018)