Brazil's Jair Bolsonaro: Venezuela should be kicked out of Mercosur

Brazil's president-elect has said Venezuela should no longer be a member of the South American trade bloc. Two months before he takes office, Jair Bolsonaro has outlined economic reforms including a pension overhaul. 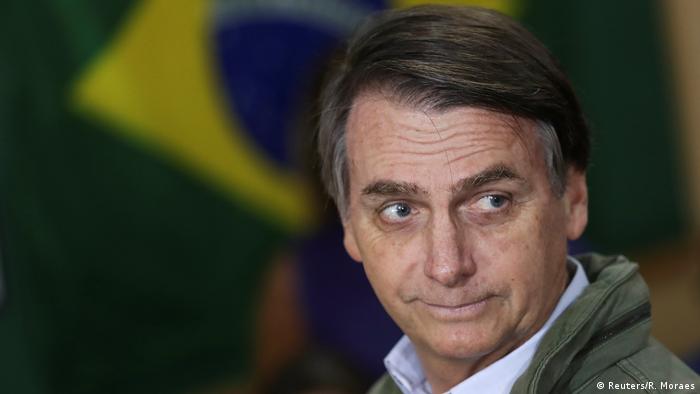 President-elect Jair Bolsonaro has accused Venezuela's leftist government of violating Mercosur's democratic clause, and said the country should be expelled from the economic alliance.

Bolsonaro made the remarks in an interview with Brazilian local media, where he also spoke about his plans for his transition to power.

The Mercosur trade bloc consists of Argentina, Brazil, Paraguay, Uruguay and Venezuela, which joined the alliance in 2012.

Bolsonaro's remarks are likely to antagonize the regime of President Nicolas Maduro and could endanger Venezuela's already precarious status in the South American economic bloc.

Mercosur members have been expressing concerns about Venezuela's political and economic situation since 2016. As a result, Venezuela gave up its rotating presidency and was eventually suspended from the bloc.

Bolsonaro has been seen as someone who could take a harder line with Maduro's regime.

US national security adviser John Bolton said last week that Bolsonaro's win, along with Ivan Duque's victory in Colombia, were "positive signs for the future of the region" that demonstrate a regional commitment to free markets and "accountable governance."

"The troika of tyranny in this hemisphere will not endure forever," Bolton said about the governments of Cuba, Venezuela and Nicaragua.

As Bolsonaro prepares for his inauguration on January 1, the president-elect has said he will evaluate all the data necessary to carry out a "restructuring" of the country.

"The preliminary numbers that we have received are troublesome," Bolsonaro said, in reference to state-run firms. In particular, he pointed to what he saw as mismanagement by the leftist Worker's Party at the state-owned oil company Petrobras.

"We do not want to chase anyone, but we do want to privatize some state-owned firms, although not the most strategic ones," he said.

With a team of orthodox economists, Bolsonaro is hoping to tackle the country's budget deficit to usher in new investment and spur economic growth, in an economy that is barely emerging from its worst recession.

Right-wing president-elect Jair Bolsonaro said he would aim to unite a divided country. He has vowed to withdraw government advertising from "lying" media. (29.10.2018)

The president-elect has said he plans to honor his campaign pledge to move the country's embassy in Israel out of Tel Aviv. Brazil will join the United States and Guatemala in making the controversial move. (02.11.2018)