Venezuela has formally ceded the rotating presidency of Mercosur to Argentina amid an acrimonious dispute over its suspension from the trade bloc. Caracas has refused to acknowledge its expulsion from the group. 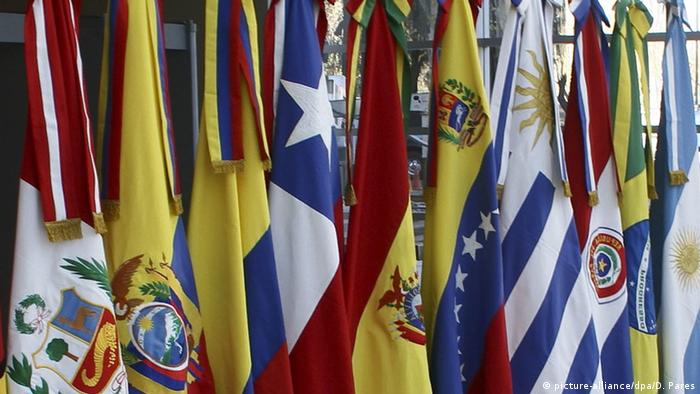 Venezuela said Friday that it will formally cede the rotating presidency of Mercosur to Argentina, although it continues to dispute its suspension from the South American trading bloc.

As its presidential term expired, Venezuelan Foreign Minister Delcy Rodriguez issued a letter on her Twitter account confirming that "Venezuela formally hands the presidency of Mercosur over to the Republic of Argentina" after having completed its "legitimate" presidency.

The letter also indicated that Caracas issued a report on its presidency, highlighting that it had successfully met the block's expectations concerning social justice and human rights.

Venezuela was suspended from the Mercosur bloc this month after years of complaints from members that its state-led economy was increasingly out of step with the rest of the region and that it had failed to meet the necessary economic conditions expected to stimulate trade and growth.

Venezuelan President Nicolas Maduro has described the suspension as an unjustified and illegal "coup." The socialist-run country has refused to recognize the decision and claimed that it continued to hold the presidency.

Around a week after the bloc's decision, Rodriguez was filmed jostling with a security guard outside of a Mercosur summit meeting in Buenos Aires after she was refused entry.

"Venezuela does not need an invitation because it is for the time being president of Mercosur," Rodriguez told reporters following the incident.

However, according to her Argentine counterpart, Susana Malcorra, Rodriguez "had been told explicitly, verbally and in writing that she was not invited."

The Mercosur group is made up of Argentina, Brazil, Paraguay and Uruguay, with Bolivia currently in the process of joining.

Venezuela was initially admitted into the bloc in 2012 and given four years to meet all membership requirements.

Current rules stipulate that it would have to renegotiate its membership terms should it seek to lift its suspension and return to the group.