Venezuela votes in parliamentary elections at a time when political tension seems to be tearing the country apart. International interest in what was once a regional power is also waning. 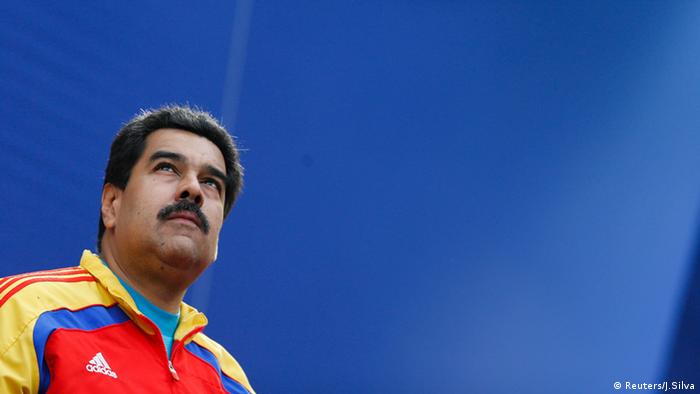 For a long time, and more or less without getting involved , the international community watched as the Venezuelan government nationalized the media, filled just about every key government position with party members, imprisoned hopeful opposition politicians or excluded them from elections by coming up with dubious accusations over the past 15 years. Only the US exerted any kind of concrete pressure, for the most part in the form of travel restrictions for Venezuelan politicians.

But Latin American governments and supranational organizations like the Organization of American States (OAS) and the European Union are slowly waking up, says Juan Carlos Hidalgo, a Latin America analyst at the Washington-based Cato Institute. "Increased repression in Venezuela has prompted harsher international criticism," the expert says.

Argentina sent the clearest message. Not even 12 hours after Kirchner's leftwing populist government term ended on November 22, the country's newly elected president Mauricio Macri made it clear how he felt about the Venezuelan government. He urged considering Venezuela's temporary suspension from Mercosur for abusing the regional trade bloc's democratic standards.

"This is the first time a Latin American president has broken this cowardly silence and openly criticized this government's anti-democratic actions," Hidalgo says. Whether other heads of state follow suit depends on how democratic Sunday's elections turn out. For the time being, Macri's move has met with skepticism among Brazilian and Uruguayan politicians. 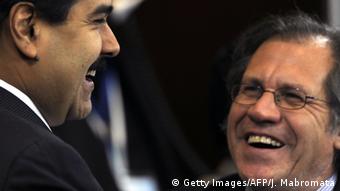 In the past, Almagro and Maduro laughed together

Even if international pressure were to increase - say as a result of blatant election fraud - it's questionable whether that would have an influence on the course being steered by the United Socialist Party of Venezuela (PSUV), Hidalgo says.

"If that Luis Almagro scum has any decency at all, I expect some justification," Venezuela's President ranted on TV. "You've taken on Venezuela, Mr. Scum, and Venezuela is the holy native country of Bolivar und Hugo Chavez!"

The reason for the outburst: in the wake of the murder of opposition politician Luis Manuel Diaz during an election campaign event on November 25, Almagro had demanded that Maduro's government end all political violence ahead of the parliamentary polls

There a several reasons for the fact that so few Latin American politicians have shown an interest in Venezuela's political crisis.

Many governments, including Bolivia, Ecuador and Nicaragua, are still part of the leftist guard that Venezuela's late President Hugo Chavez once stylized as 21st century Socialism. More moderate governments, like Uruguay und Brazil, that could at least be expected to be mildly critical also felt close to the ideology of Chavism. 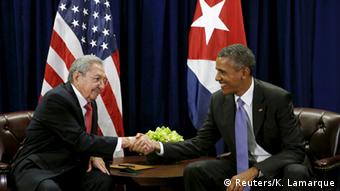 Venezuela ally Cuba has turned to the US

But the old bonds are increasingly disappearing.

"Venezuela has been seeing increasing isolation over the past few years," according to Reggie Thompson, Latin America analyst with the US Stratfor geopolitical intelligence firm. "Sensing the impending economic deterioration, even Cuba moved out slightly from the Venezuelan orbit and decided to start improving relations with the United States ever so slowly."

Many governments have their own problems, Stratfor analyst Thompson adds: "Brazil's President Dilma Rousseff and Argentina's Mauricio Macri are too busy with internal affairs to deal with Venezuela."

No demise in sight

The election is unlikely to initiate a transfer of power in Venezuela, Thompson says, adding that, after all, it's a parliamentary and not a presidential election. Cato analyst Juan Carlos Hidalgo also doesn't expect real change, as the government is too intent on staying in power.

But even if Sunday's polls should initiate a change of power, both experts agree that a collective end to 21st century Socialism is unlikely: Despite all the similarities, every country voted for its very own Socialists.

Authorities in Venezuela have arrested three people suspected in the murder of opposition leader Luis Diaz. The victim was a candidate for the Democratic Action party ahead of parliamentary elections next Sunday. (01.12.2015)

A dead opposition politician, a nervous government, and an era ending. Venezuela's forthcoming election could being Chavismo to its conclusion. Mostly, everyone is hoping that the situation remains peaceful. (28.11.2015)

Macri calls for unity and vows to take on Argentine economy