The president-elect has said he plans to honor his campaign pledge to move the country's embassy in Israel out of Tel Aviv. Brazil will join the United States and Guatemala in making the controversial move. 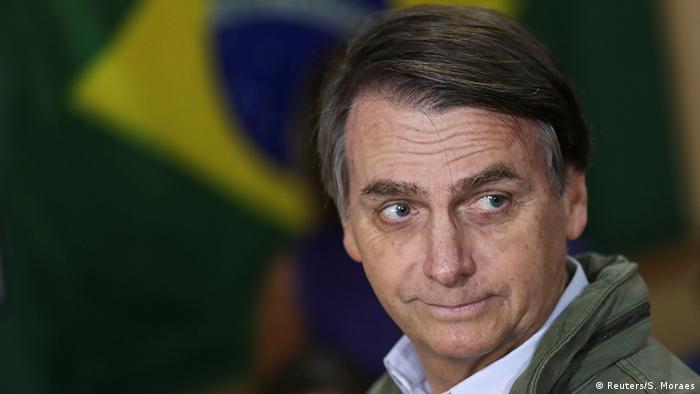 Brazilian president-elect Jair Bolsonaro said on Thursday he plans to move the country's embassy in Israel to Jerusalem from Tel Aviv.

"As previously stated during our campaign, we intend to transfer the Brazilian Embassy from Tel-Aviv to Jerusalem. Israel is a sovereign state and we shall duly respect that," Bolsonaro tweeted.

"I congratulate my friend Brazilian President-Elect, Jair Bolsonaro, for his intention to move the Brazilian Embassy to Jerusalem, a historic, correct and exciting step," Netanyahu said in a statement.

If Bolsonaro honors his campaign pledge, Brazil would become the third country after the United States and Guatemala to have an embassy in Jerusalem.

Paraguay also briefly shifted its embassy to Jerusalem, but moved it back to Tel Aviv following the election of its new president, Mario Abdo Benitez.

The Palestinians regard the eastern sector of Jerusalem — which Israel annexed in the 1967 Middle East war — as the capital of a future Palestine state. Israel claims the entire city, including the eastern sector where key holy sites for Christians, Muslims and Jews are located, as its capital.

Most countries maintain embassies in Tel Aviv, saying the final status of Jerusalem must be determined through negotiations.

Some Brazilians have raised concerns about Bolsonaro's plan, saying it would hurt Brazil's relations with Muslim nations.

Donald Trump has pompously said, "It is time to recognize Jerusalem as the capital of Israel." But his words are no more than an insulting provocation showing he couldn't care less about the region or its inhabitants. (09.12.2017)

Israel marks its 70th anniversary, but not everyone shares the joy

Independence Day celebrations kicked off on Thursday, with festivities set to last for the next couple of days. But as Dana Regev reports from Jerusalem, a joyful day for some could mean something different for others. (19.04.2018)

The Palestinian president has said the US decision undermined the two-state solution to its conflict with Israel. Abbas also said the Palestinians will not accept a "biased" US as the sole mediator in the peace process. (27.09.2018)