US feeling supersonic at second attempt to break sound barrier | Business| Economy and finance news from a German perspective | DW | 08.10.2020

US feeling supersonic at second attempt to break sound barrier

In 1971, an American plan to build a gigantic supersonic airliner failed. Now, nearly 50 years later, the first privately developed supersonic aircraft is finally premiering in the US. 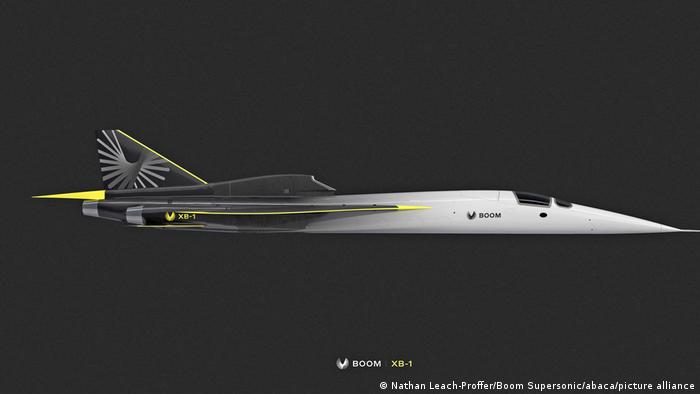 Riveting machines used to fill aircraft factory hangars with deafening noise. But in the hangar of Boom Supersonic at Centennial Airport in Denver, Colorado, it is almost quiet.

It resembles a huge lab, where cleanliness is one of the highest priorities. There are no metal shavings to be found anywhere on the floor, no screeching machines. Instead, work with almost surgical precision dominates, exact to a hundredth-of-a-millimeter thanks to laser calibration. Welcome to the aircraft factory of the 21st century.

"We are excited every day to see the future of flight mature here in our hangar," said Blake Scholl. The 39-year-old is the CEO of Boom Supersonic, a tech company vowing to bring the first supersonic airliner since the Concorde into service by the end of the decade.

Read more: Will the coronavirus pandemic result in a pilot shortage?

This week, Boom Supersonic celebrates the most important day in its six-year history: The unveiling of the XB-1, nicknamed Baby Boom, broadcast live online around the globe. The two-seat demonstrator is the world's first privately financed and built supersonic jet. The XB-1 is 21 meters (69 feet) long, has a wingspan of 6.40 meters and can fly two test pilots at up to 2.2 times the speed of sound (Mach 2.2 or about 2,700 kilometers per hour [1,678 miles per hour]) over a distance of up to 1,900 kilometers. 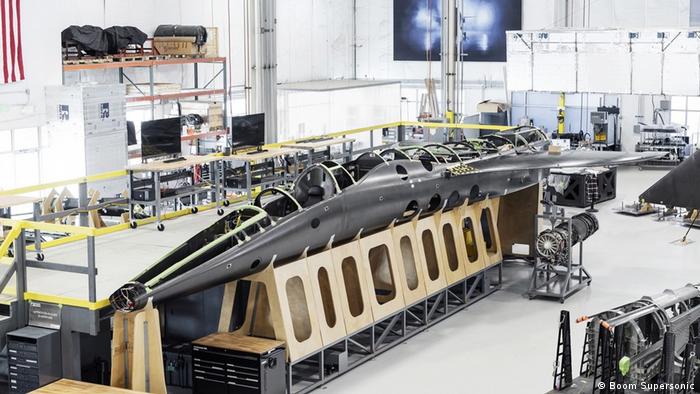 The majority of the $160 million (€137 million) that Boom Supersonic raised through investors has been spent on this first aircraft, which is due to fly in mid-2021 — after a three-year delay. The Baby Boom demonstrator, about a third of the size of the final Overture airliner, is supposed to validate the technical concept before the actual airliner is built. Boom sees a substantial niche market for supersonic flights, left vacant after the Concorde era ended in 2003.

Thanks to advanced technologies, the new airliner is being billed as economical enough to allow for supersonic fares no higher than what long-haul passengers pay in business class today. When completed, the American plane will only be three-quarters the size of its Anglo-French predecessor. The new supersonic airliner measures 51.8 meters in length and has a wingspan of 18.2 meters, making it considerably smaller than Concorde (length 62 meters, span 25.5 meters). Its cabin will accommodate up to 75 passengers.

Overture's smaller dimensions fuel its designers' hopes to contain the so far inevitable sonic boom and allow for a broader range of destinations. 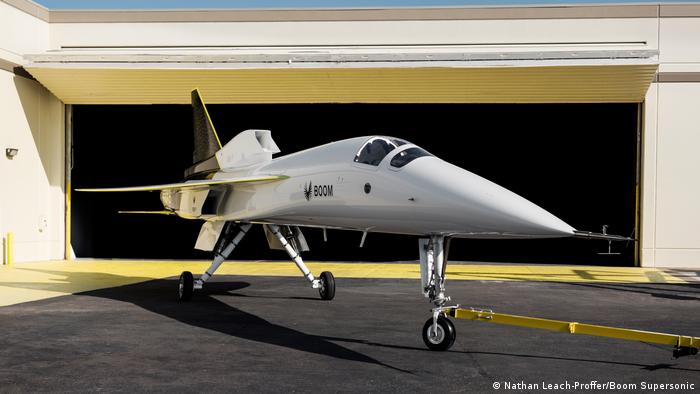 The Concorde was restricted to flying in supersonic mode over the oceans. Boom Supersonic assumes for the time being that the US ban on supersonic flights over land will remain in place, though the US aviation authority is evaluating amendments for quieter supersonic aircraft.

Still, Scholl sees 500 possible routes for supersonic flights, even if limited to doing so over water. That would mean flights from London to New York in three hours and 15 minutes (instead of seven hours), or from San Francisco to Tokyo in barely five-and-a-half hours (instead of 11).

A major Boom supporter is Japan Airlines (JAL), which has already paid deposits on 20 aircraft. Richard Branson's Virgin Atlantic Airways has also secured options for 10 Overtures by making non-refundable down payments of millions of dollars. 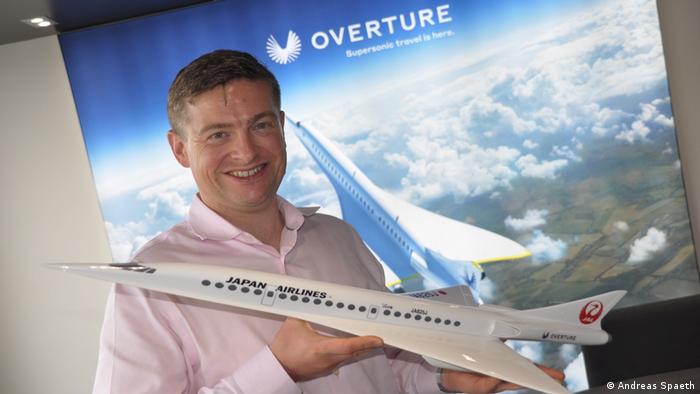 Sustainability and being environmentally acceptable have been key factors from the beginning, as all Boom aircraft fly exclusively with biofuels. Beyond Boom Supersonic, a second American company, Aerion Supersonic, also aims to get its own supersonic 12-seat business jet in the air by the middle of the decade and is making equally visible progress.

The fact that the first and only supersonic airliners of the early 21st century may finally hail from the US means history comes full circle, helping Americans overcome a national trauma. While the United States led the civil aviation field globally for decades, its concerted efforts failed to bring a behemoth of a supersonic airliner to market in the 1960s.

In June 1963, President John F. Kennedy said the "government should immediately commence a new program in partnership with private industry to develop at the earliest practical date the prototype of a commercially successful supersonic transport superior to that being built in any other county in the world."

The background was the so-called space race with the Soviet Union — which was working on a similar project at the time. The Soviets ultimately succeeded on December 31, 1968, becoming the first country in the world to launch supersonic transport.

The Tupolev Tu-144 made its first flight months before the Anglo-French Concorde. Still, while the Western European supersonic airliner became a technical triumph of the 1960s, its Soviet counterpart never really reached the operational maturity required and was retired in 1977. 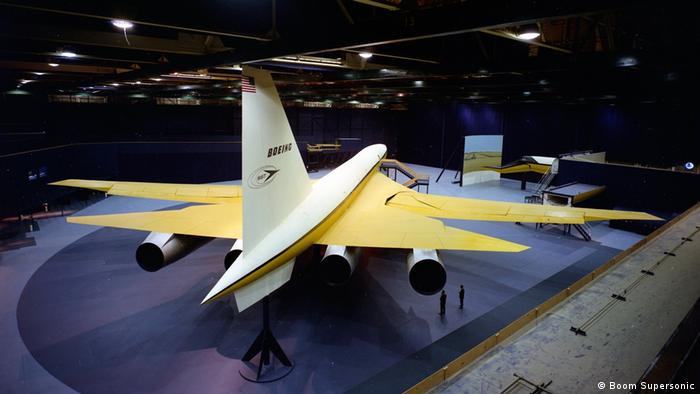 In the US, it turned out that Boeing and the government ultimately wanted too much. The concept was a supersonic "monster" — as famed British Concorde test pilot Brian Trubshaw referred to it in his memoirs — more than 30 meters longer than the Concorde, carrying almost 300 passengers and achieving nearly three times the speed of sound. It came to a halt when Congress rejected further funding in 1971.

Called the Boeing 2707, the project aimed too high too soon at a time when many of the technologies required were not mature enough for regular use. In the end, over a billion dollars (more than $6.5 billion in today's money) was sunk into the envisaged aircraft — the result: Nothing more than a full-scale wooden mock up.

"The USA spent more money — and finished up with nothing — than was ever spent on Concorde," concluded Brian Trubshaw.

The incident should serve as a cautionary tale for Boom Supersonic and others as a clear example of how not to approach such a project.

Andreas Spaeth is the author of the book "Supersonic airliners, past and future"

Supersonic, but without the boom — NASA commissions passenger 'X-plane'

NASA has hired Lockheed Martin to build a supersonic passenger jet that can quietly break the sound barrier. There hasn't been a supersonic plane in commercial service since the retirement of Concorde in 2003.

The Bloodhound team has described the project's revival as "the best possible Christmas present." The Bloodhound has been designed to go over 1,000 mph on land, well beyond the previous 1997 record.