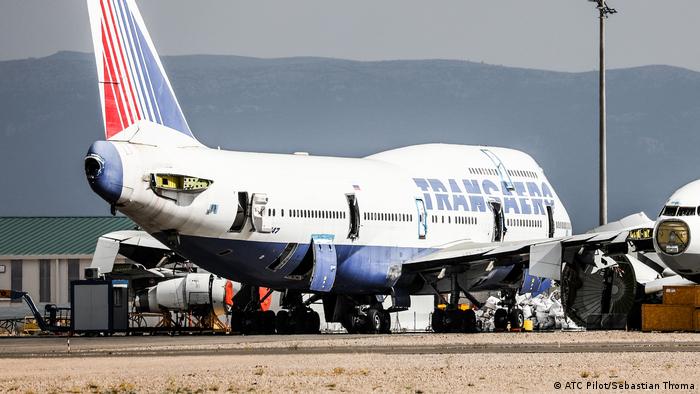 The news from Chicago on Wednesday hit a nerve. Boeing CEO Dave Calhoun announced to employees the end of an era: "In light of the current market dynamics and outlook, we'll complete production of the iconic 747 in 2022."

It was the culmination of an accelerating downhill race for both the world's biggest airliners, the vintage Boeing 747 and the Airbus A380, which has been in service only since 2007. The giants had not been economical to operate for a while, but the pandemic made them obsolete.

It's a painful farewell for some. Many Australians had tears in their eyes when they watched the last Qantas Boeing 747 take off at Sydney airport recently.

"Across Australia, emotions were raw as Aussies said goodbye to a lady and dear friend who had perhaps brought some of us to a new life down under, or taken us to the world," commented Australian aviation expert Geoffrey Thomas. Another added: "Until the 747 era most Australians could reach the outside world only by ship. We will miss her." 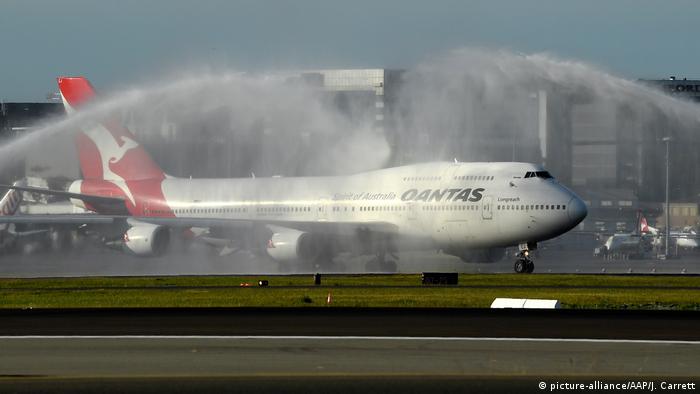 A last salute in Sydney for the last Qantas 747

This era began for Qantas in 1971 — and ended prematurely in July 2020, after five decades and a total of 77 jumbos sporting the kangaroo on the tail. But it ended in style with farewells and flyovers above the Sydney opera house, culminating in a routing flown in a kangaroo shape that was easy to spot on popular flight tracking apps and websites.

It was a dignified last bow for the Australian Boeing 747s, still known to many as the "Queen of the Skies," before the aircraft's last landing in the Californian Mojave desert to be ultimately broken up.

Almost at the same time in London it was a different story. Abruptly, overnight and lacking any elements of style, British Airways announced the end of its Boeing 747 schedule, originally planned to run until 2024. 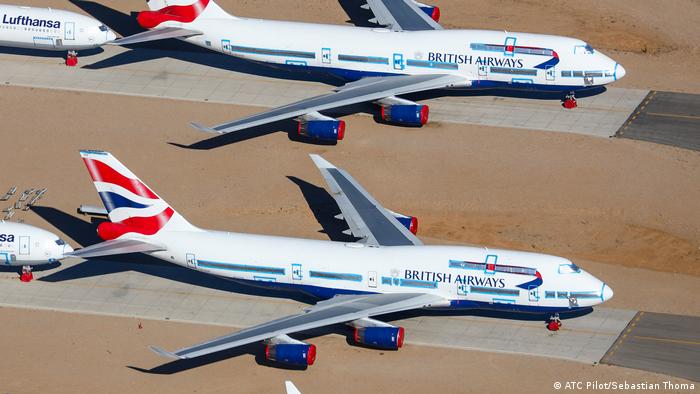 British Airways mothballed it 747 fleet. Their last trip will be to a scrapyard in Terue, Spain

The "immediate retirement of its 747s marks the demise of the jumbo plane's 50-year reign," remarked the Financial Times. The British were the biggest supporters of the 747 program and had the world's largest fleet — in all 110 jumbos sporting the union jack on their tails had been in operation for British Airways and its predecessor BOAC since 1970.

"This is not how we wanted or expected to have to say goodbye to our incredible fleet of 747 aircraft. It is a heartbreaking decision we have to make," declared British Airways CEO Alex Cruz. "The retirement of the jumbo jet will be felt by many people across Britain," he predicted.

There was no time for any farewell, as most of the 31 747s British Airways operated at last count were already stored in graveyards in Spain, awaiting scrapping. Before that Virgin Atlantic had already sent its 747s into early retirement as had KLM in the spring. This now leaves Lufthansa as the world's largest 747 operator with a fleet of 30. 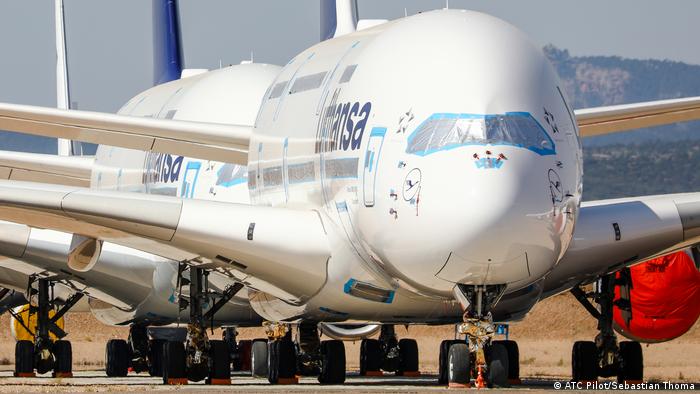 It's not just the 747s waiting to be dismantled. The Airbus A380 double-deckers are also waiting in line

The Boeing 747, described by British Airways pilot and author Mark Vonhoenacker as "370 tons of aviation legend," first flew in 1969, months before the first moon landing. Only one 747-8, the most recent iteration of the iconic jet, is built every two months now, and that too only for freight. Still even after the production ends, the US government will receive two new Air Force Ones, which are modified 747-8s.

It is hard to overlook the fact that the coronavirus threw aviation into its most severe crisis in its long history. Passenger levels will only get back to pre-crisis levels in 2024 at the earliest, according to the airline association IATA. Presumably even then, less people will fly, and many don't want to be crammed into a cabin with 400 or more other passengers again. 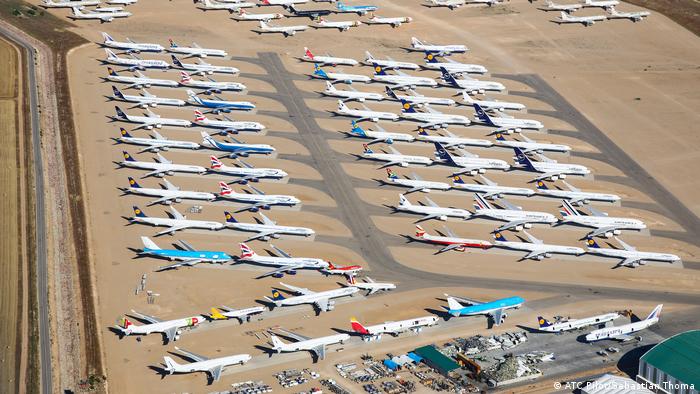 The scrapyard in Terue, Spain looks like a massive dinosaur cemetery

Big jets with four engines like the 747, but also the European Airbus A380 — aimed at replacing the 747 just over a decade ago — had become too expensive to operate even before the crisis. It was all but impossible for airlines to fill enough seats to make a profit. Now smaller and much more efficient aircraft like the Airbus A350 and the Boeing 787 Dreamliner are the norm.

"We know the A380 is over, the 747 is over but the A350 and 787 will always have a place," said Tim Clark, president of Emirates Airlines in Dubai in May. The comment caused some stir, as Emirates is by far the biggest customer of the A380, operating 115 of them pre-crisis, with eight more due to be delivered soon.

Flying under the radar

Two months later, in July, however, Clark was more upbeat: "As demand returns, and given the slot availability at prime hubs, there will be a place for it [A380s]. I'm hoping by April 2022, all our A380s will be flying again." As Emirates' business model is based on travelers connecting between long-haul flights, a segment which is expected to be the last to recover from the crisis, doubts are in order.

In any case the A380, whose planned end in 2021 was already decided before COVID-19, lost most of its already weakened base in the last few weeks and months. A total of 242 of the double-deckers have been delivered to 15 airlines. Scheduled flights on A380s are currently offered by only Emirates and China Southern. 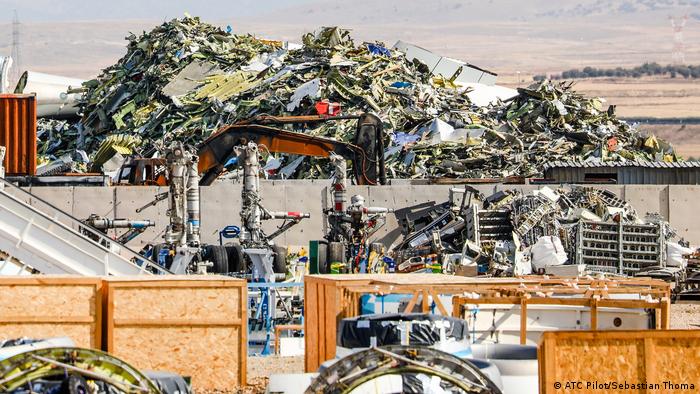 All others, including those of Lufthansa, are stored under the scorching sun of Spain, California or the Australian outback. They could stay there for years, or just wait for the scrapman like the entire former Air France fleet of 10 A380s — some have only been in service for six years. Even Singapore Airlines ominously announced its current fleet of 19 A380s would undergo a thorough review.

There are currently only a little over 60 passenger Boeing 747s in active service worldwide plus 244 for freight, of a total of around 1,500 that were ever built. It is hard to ignore the signs: The era of flying giants is rapidly coming to an end.